Of Whales and Birds Of Prey - A Star Trek diorama

A still from the film, 'Star Trek IV: The Voyage Home" from which this diorama is based.

I have been a Star Trek fan since it first appeared on TV screens across America in 1966. I'm not that much of a fanatic as some but have to say that my heart fell after sitting through “Star Trek: The Motion Picture” (1979), an effort that almost killed the franchise in this reviewer's humble opinion.

Thankfully, “Star Trek II: The Wrath of Khan” (1982) was released and is probably the best in the original Star Trek filmology. Two movies later, “Star Trek IV: The Voyage Home”, a solid second place holder (in my view) was released in 1986. It is a lighter and more amusing tale despite the 'end of the world' plot elements which, on close examination, don't really hold up but it's a very enjoyable film nonetheless.

I won't go into all the film details here but a crucial plot point was for our Star Trek heroes to go into the past and rescue a pair of humpback whales and return to their time and avert the ensuing disaster only the whales can avert (don't ask, just watch the movie).

The pivotal scene is when our intrepid crew race to save the humpbacks in a captured Klingon 'Bird Of Prey' (watch the movie) that are about to be slaughtered by Russians whalers. The scene where the Klingon ship uncloaks (de-cloaks?) above the whaling ship as it is about to fire harpoons into the whales has always stuck in my mind as one of the most iconic scenes in the entire franchise which became the inspiration for this diorama. 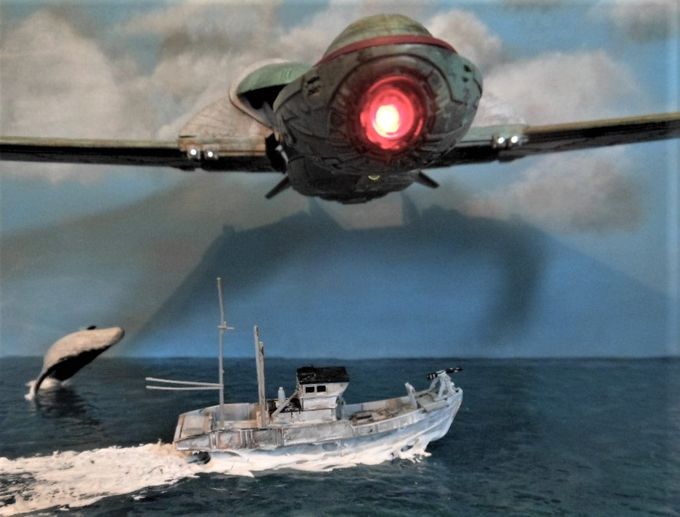 My version of the same scene. I added two whales beneath the Klingon Bird Of Prey. Pardon the the shadow on the backdrop.

My biggest problem was to find a ship of the right scale to fit into the scene with the Klingon ship hovering above. I first thought was to get my hands on the largest BOP model available which would make the whaling ship size problem a bit easier to solve but the largest I could find was an old AMT kit of a Bird of Prey that has a 16 inch wing span. As it turned out, I found an N scale fishing boat which was probably 50% bigger than I needed but I altered it enough to fool the eye (I think) into accepting the disparity.

In the interest of making the scene a bit more dynamic, I decided to light the BOP which I found was much easier to say than do. After figuring out a circuit and LED / fiber optic placement, I was ready to go. The two pairs of wing lights were fiber optics and the interior lighting was driven by four LED (this includes the engine which you really can't see that well) long with a dorsal and ventral lights which flash

The kit instructions left much to be desired since the kit was made for an international market, e.g, no English. Additionally, the wings could be placed in an attack or cruising mode which is not really explained at all which presented a number of opportunities to screw up the build if one weren't careful. If I had a positive remark to offer it would be that the painting instructions were very thorough and, with the addition of loads of weathering, one can end up with a nice looking ship. 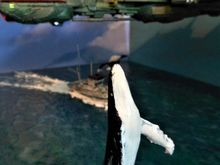 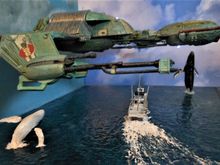 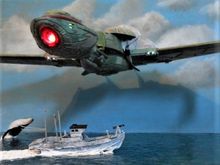 The next problem was how to suspend the model in such a way to avoid using a stand which would destroy the illusion of flight. I decided to run a pair of struts out of the back of the ship into a painted background, using the ship as a masking agent. One of the struts was a length of brass stock and the other a 1/8” diameter piece of copper tubing which also acted a conduit to the light's power supply.

I painted a sky background on a 9” x 15” piece of Masonite (a clipboard actually with the clip removed) which was stiff enough to suspend the ship from but not too bulky for the setup as a whole. I drilled holes to insert the supporting struts through and reinforced from the back with two part epoxy and metal washers. The Masonite also offered a nice foundation for my 9 volt power supply case.

Finally, came the base itself. I made a light frame 15” wide by 13” deep from ¼ ”x 1” pine into which I placed a piece of 1” foam insulation board. I coated it with a layer of Hodge Modge and filled in any seams around the perimeter with the same to seal the foam from any corrosives I might get from spray paint. (Note: When using foam board, its a good practice to seal it with something like Modge Podge or white glue if you will be using paint from a rattle can later down the road. The spray paint has solvents in it that can literally melt the foam or cause it to react in weird ways. You've been warned).

I gave the whole base a coat of gray primer from a rattle can. I then came back with my ocean colors (teal and dark blues & greens) randomly blotched over the surface, blending the colors to avoid any sharp lines. I finished it off with a couple coats of Gallery Glass Crystal Clear (#16081) which dries clear and suggests a rippled surface. (Note: Gallery Glass is a line of faux stained glass acrylic paint you can find in your craft store or online).

The two breaching humpbacks came from my 3D printer (I LOVE that thing!) and the whale ship was a N scale kit from Greenmax (Kit # 2168) which I altered to look more like a whaler than a fishing trawler. After their placement, I laid down another thick, stippled coat of the Crystal Clear Gallery Glass. Once that dried, I used white Liquitex modeling paste for splash effects around the whales and ship.

I had fun building this little display though I'm not sure if I would light it again if I gave it another go. Still, I liked the way it came out and though the purists out there might have some objections around the scale issues, I think it captures the scene from the film pretty nicely. 6/20/19 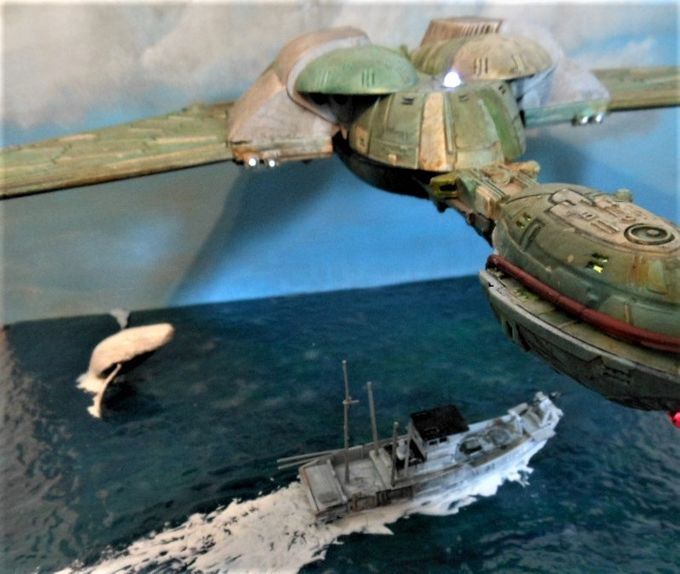 Addendum: This diorama won the Most Imaginative award at the 2019 Baycon in N. Smithfield, Rhode Island. 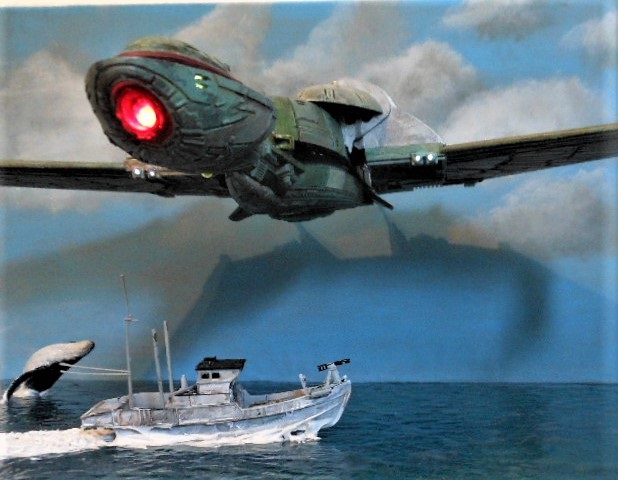 that is totally amazing i do decopage you are leagues ahead

Thank you, Matt. My apologies for the late reply. My visitor comments had an approval flag attached (it wasn't me!) before I even saw them. Computers! Sheesh.

You did an amazing job! the water is terrific!