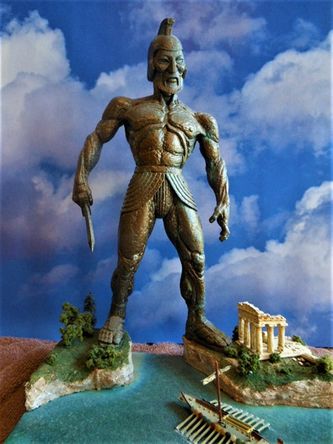 One of my favorite Ray Harry hausen films is "Jason And The Argonauts" (1963) and my favorite charecter from that film was the bronze giant, Talos. In original Greek mythology, Talos was a bit bigger than a man (still made of bronze though) and had an eternal fire burning inside. When he captured usurpers on his island, he would hug them to his chest, roasting them alive. Those Greeks! What a bunch of cut-ups!

Anyway, I currently have two Talos build ups in my collection. One has Talos kneeling on the god's jewelry box, looking down on Hercules and Hylas as they make a hasty getaway. The kit is resin and I believe sculpted by Tony McVey. The kit was pretty simple but well made. I only added a bit of vegetation to break up the lines.

The other is a vinyl kit (on the right) I picked up on eBay when I was first starting out in this hobby and its posed in a simple standing position. I added the base, miniature ship and ruins for additional interest. 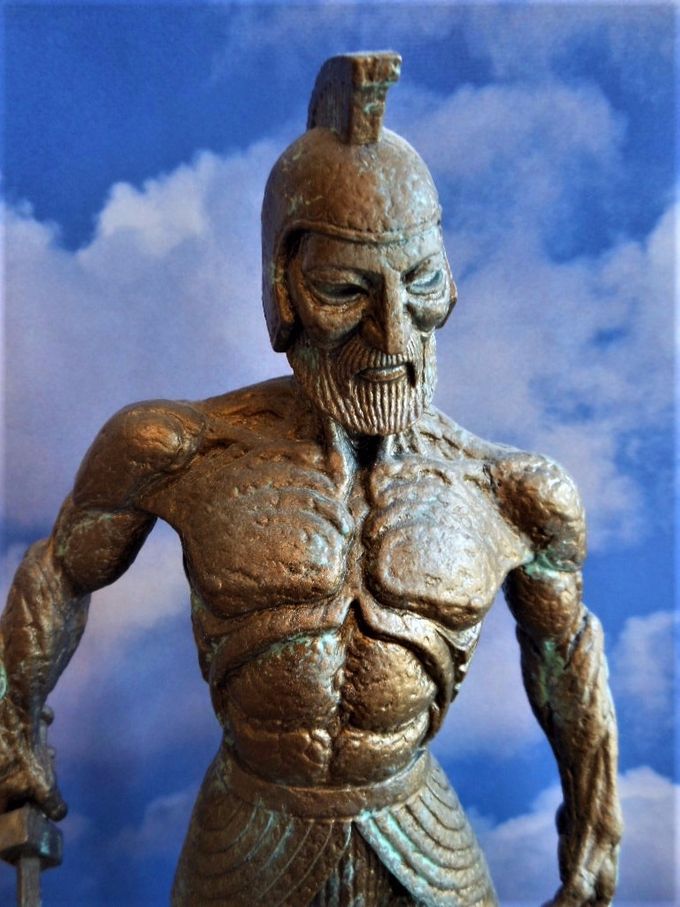 New background on both dioramas adds so much. 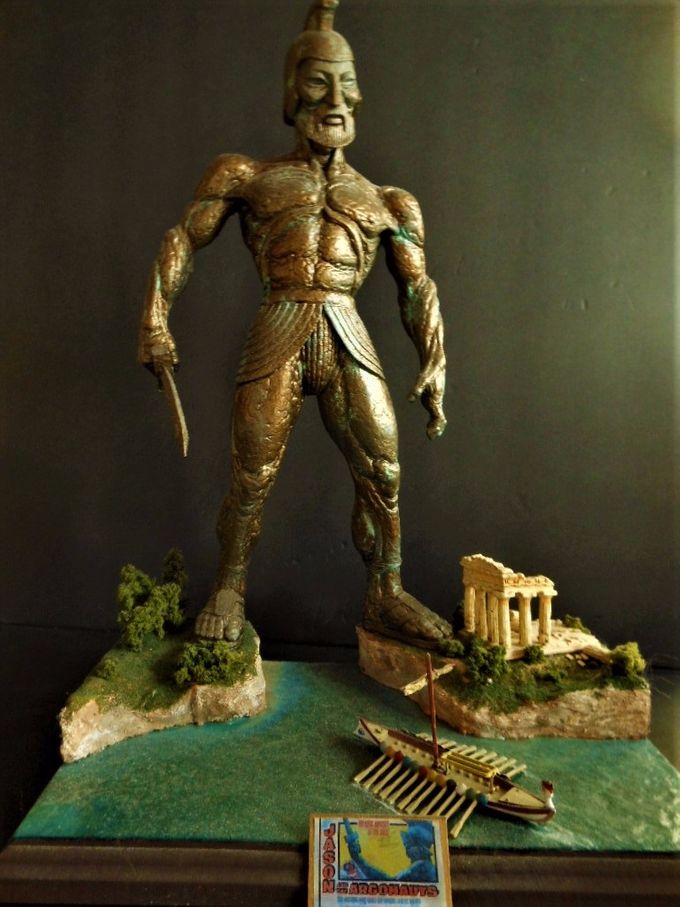 Here is a better view of this kit with a darker background. I used a photo editor and screen filters to get a better overall image. 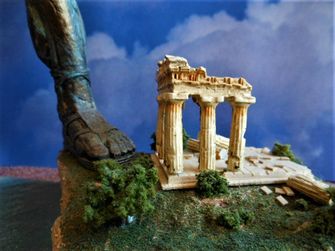 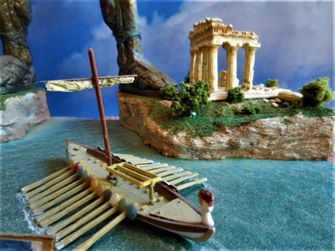 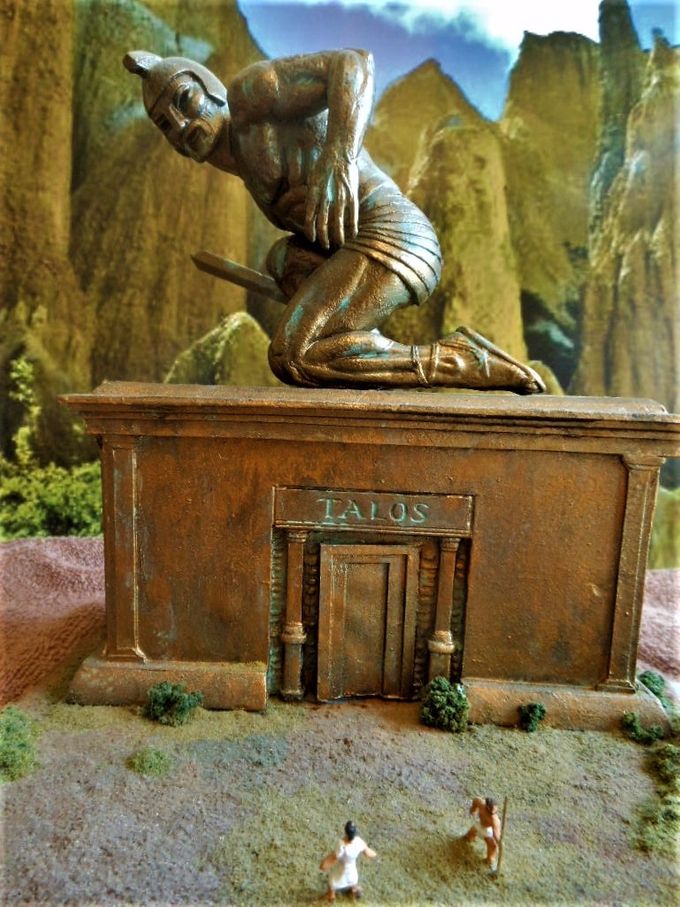 Here is the 'kneeling' version of the big guy just about to get into action. I used the same background on this shot as I did on the Battle For Colossa pictures, 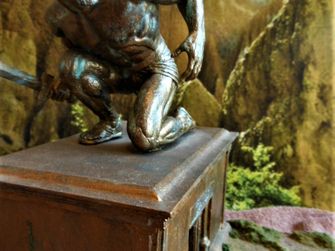 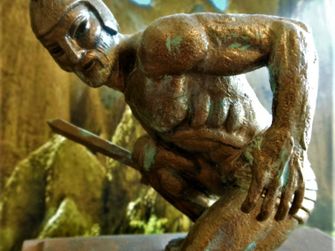 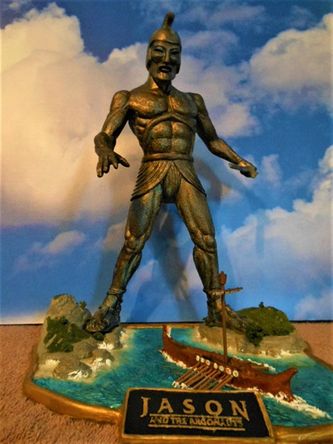 Here is yet another resin kit based on the Talos figure from the 1968 Harryhausen classic, “Jason And The Argonauts”. This is a very nice sculpt by Joe Laudati and retails for around $90.00.

This is my third Talos build up, one being of Talos posed on the god's jewel case and the other a vinyl version I picked on eBay when I was first starting out in the hobby. That kit had just of the Talos figure and I added the base which, as it turns out, was very close in design to this kit I'm reviewing here although larger.

This kit was a pretty simple affair with very little clean up needed and had about a dozen pieces (not counting the toothpick oars). If I had one complaint about this kit is that the Argo (Jason's ship) was cast into the base which made its painting and installation of the tooth pick oars a little more difficult than it had to be. The mast/sail part seemed a little clunky to me so I made a new one with small dowels and tea bag paper for the sail which I lashed to the cross arm with very thin wires.

I also built up the land areas a bit more with two part epoxy putty and added ground foam foliage and shrubs to add a little more interest to the scene. I coated the 'water' with a thick clear resin and made the breakers and boat & oar wash with Liquitex model paste.

This is a nice kit for beginners partly due its simplicity and price along with being another beautiful sculpt by Joe Laudati. You can pick one up at Monsters In Motion, an online store that I frequent regularly. Here's their link: https://www.monstersinmotion.com/cart/index.php?main_page=advanced_search_result&search_in_description=0&x=0&y=0&keyword=talos 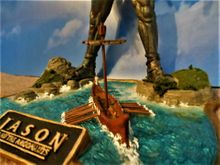 Right side detail shot of the base. Click once to enlarge. 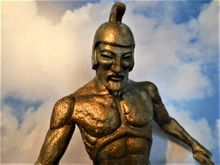 Close up of the Big Guy. 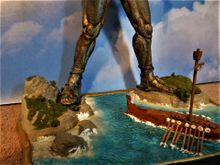 Left side detail shot of the base. Click once to enlarge. 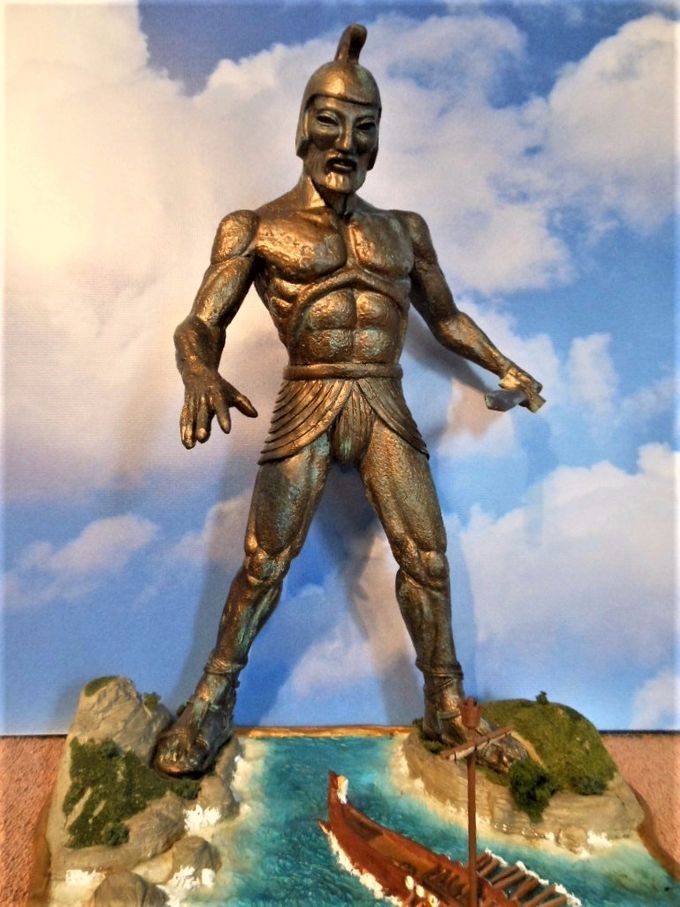 How can I buy a TALOS model kit? I need the one where he's on his pedestal, with his head facing forward.

The kit you want is pretty rare but turns up on eBay every so often. Two heads are provided, one facing forward the other looking down. Costs about $150 US

I like the additional touches with the ruins & vegetation to the kit!!!

Where can I find these kits?

Either an eBay or Internet search should turn up some from time to time. Set up a "Ray Harryhausen model kit" search in Ebay an you should get some responses in your email. Some will be 'Talos'