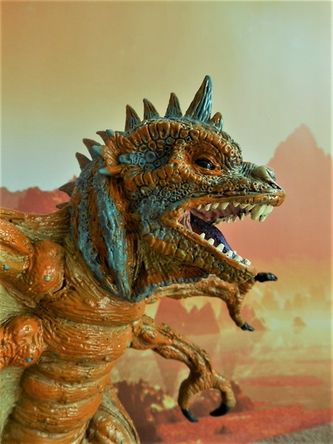 This is a very, very nice and extremely rare resin kit of Ray Harryhausen's earliest stop motion creations, “The Jupiterian”. The model is based on a very short film segment of this alien creature and presumably from the handful of sketches drawn by Harryhausen himself.

I managed to get my hands on this out of production 1993 kit from Webbhead Enterprises on eBay not too long ago and I had loads of fun building it. The very clean and super detailed sculpt is by Jim Bowman who is also responsible for the sculpt of the bronzed King Kong kit (also from Webbhead) that you can see elsewhere on this site in the 'King Kong' area.

As I said, the casting was extremely clean with very little flash and only a few seams lines to contend with. The kit has forty parts (!!!) but most are the dorsal spines. Along with the Jupiterian, the kit has a very nice base and a small Flash Gordon type of spaceship that cries out to be lit, so I did. If I had a complaint it would be that the base is tad too small to balance the creature which, being a little top heavy, has a tendency to fall over. I addressed this problem by making the base a little larger towards the back which had the added benefit of providing a place to hide the battery for the spaceship lighting.

The fins on the spaceship had some age damage (lots of splits and chips) so I ended up making my own out of styrene stock I had on hand that was the correct thickness. I drilled out the core of the ship along with it's port holes so I could insert a standard incandescent light bulb I salvaged from my model railroad scrap box. I powered it with a 9V battery which I hid in the base and installed a small SPST on/off slide switch in the rear of the base.

Painting presented something of a challenge since available images of the creature are black and white sketches and the brief film segment featuring the creature appears to have been colorized, making the monster a medium blue color. I have also seen a very nice build on Google images (who did this nice work I don't know) which has the creature as an overall reddish orange hue with a tan or white underbelly.

I ended up looking at many photographs of reptiles and lizards on Google to get some ideas for my color palette. After several false starts, I decided to go with an orange and blue stripped appearance with cream colors on the 'webbing' between the arms and in various skin folds on the underside of the body. The claws are a gloss black as are the eyes. I may, at some future date, decide to revisit the monster's color scheme but for now I'll have to be content with what I have. I'm open to any and all suggestions. 5/25/17 NFS 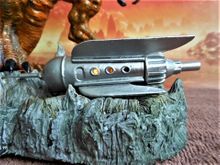 Close up of the lit spaceship 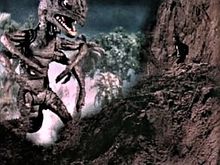 An apparent still from Ray Harryhausen's 'test' footage of the Jupiterian in action.

Conceptual drawing by Harryhausen of his Jupiterian.

NO! Alternative images productions doesn't have any rights of production/ownership of any kind. I am Jean Louis Crinon, I designed sculpted, and I produce this kit solely. You are buying recasts...

Very nice page on very cool kit. I just wanted to let you know that this model was sculpted by James G. GROMAN, not Bowman. Jim is a very prolific painter, illustrator, sculptor and toy designer.