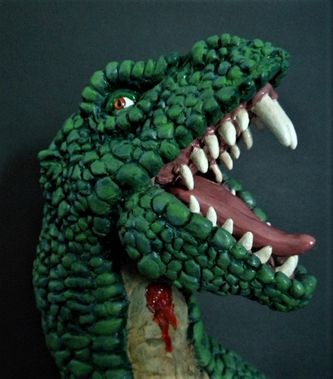 Here is a resin kit I picked up at this year's 2018 Jersey Fest that presents a scene from the 1953 sci-fi/horror Ray Harryhausen classic “The Beast From 20,000 Fathoms”. This was Ray's first solo effort in a feature film and it shows, in a fundamental way, what we can expect to see from this young animator in the years to come. Although the story is a bit plodding (in my view) until the Rhedosaurus finally makes its appearance at the docks in New York City, things pick up pretty quickly from there after a remarkably gruesome death of one of New York's finest who thinks he can take down a dinosaur with a hand gun. Oh, were it ever so easy.

It may be of interest to some that “Beast” is thought to have been the inspiration for the original 1954 Japanese Godzilla film (aka Gojira). Additionally, “Beast” has the added distinction of being the first monster being caused by some atomic use or mishap which dominated the horror/sci-fi scene in the 50's.

Anyway, the scene the kit provides is at the climax of the film where our hero scientist and a very young Lee Van Cleef as a military sharpshooter attempt to fire a radioactive isotope into the neck wound the creature had received earlier. The isotope was required to act as a sterilizing agent because the creature is infected with a prehistoric virus which threatens to kill any who come near its bodily fluids, e.g., blood. The creature has been cornered inside the Coney Island roller coaster where, after being plugged by Lee, it dies in a very dramatic and satisfying conflagration, roll credits. 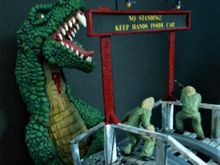 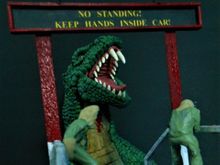 The kit is a sculpt by Rick Catizone whose resume reads like a who's who in the sci-fi/fantasy genre. Although I liked the Rhedosuarus sculpt very much, I wasn't that impressed with the coaster and figures which were a bit clunky IMHO. Mr. Catizone has several other sculpts available based on Harryhausen's earlier work which, I believe, are made to order. Click here to get a look at them and his other kits: https://www.rickcatizone.com/resin-kits

The creature's cast was very clean and didn't have many objectionable amounts of seam lines or bubbles. Thankfully, Mr. Catizone thoughtfully cast the upper and lower jaws and tongue separately so any painting could be completed apart from the creature itself which made that step MUCH easier.

The coaster framework was also cast in resin which left the rear of the structure empty of details so if you want to display this piece in a 360 degree fashion, it ain't going to look too hot. I suppose one could “stick build” the coaster section with bass wood (which I may do in the future) but I opted just to add a little more bracing to the general structure. For reasons that I already stated, I decided to use my own wood stash for the sign and the support posts at the peak of the ride. I had a couple lamps that were the right scale for the coaster so I added them to the top of the “Stay Seated” sign. If I decide to replace the coaster with my own wood construction I may install actual lights and hide the batteries inside the creature.

The figures, I felt, were a bit too small but adequate. I cut off the isotope grenade at the tip of the rifle barrel because it looked more like a harpoon than a rifle grenade and added my own which I made from a stove pipe chimney I found in my model railroad scrap pile. I ran common pins up through the bottom of each figure's foot to mount them to the top of the coaster. 10/31/18 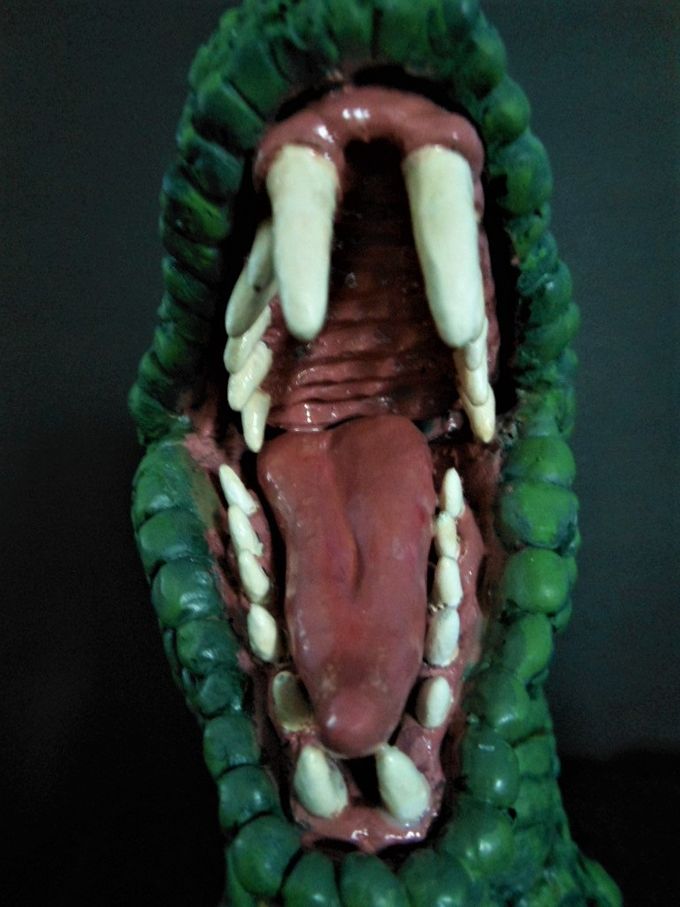 The last thing the cop saw when trying to take the Rhedosaurus down with a hand gun.