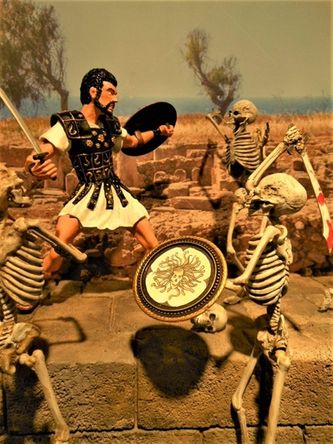 Jason and the Argonauts: The Final Battle

As the title suggests, this a very nice (and rare) metal and resin kit showing the climatic scene in what some considers Ray Harryhausen's masterpiece “Jason and the Argonauts” (1963). I first saw this film at my local drive-in when I was mere lad of thirteen and though the venue detracted somewhat from the experience, I still was transfixed by just about every animated element of this film. Although I didn't know it at the time, I had been a huge fan of Harryhausen since I saw “The 7th Voyage of Sinbad” (still my all time favorite on so many levels) at the tender age of eight. Though I hadn't a clue about the mechanics of stop motion animation, I could always recognize the mastery of Ray's technique compared to other less skilled animators of the Fifties and early Sixties, the only exceptions being David Allen and/or Jim Danforth. But I digress.

This kit is from Hogan's Bones (distributed by Monsters In Motion) and released way back in 1994 which explains its scarcity. I was lucky enough to come across this kit on eBay and managed to win the kit for a rather hefty price.

The piece has two two artists associated with it. The 1/8 scale figures are by Bob Bagy and the two piece highly detailed resin base by Mike Heinntzelman. Jason is cast in solid resin and comes in five pieces whereas the skeletons are metal, some form of Zamac (zinc & aluminum). In my view this is the biggest problem with this kit. The skeletons each have twelve parts not counting the battle gear so you have one skull, two ribs cages, spine/hip combo, two arms, two hands, two legs and two feet. 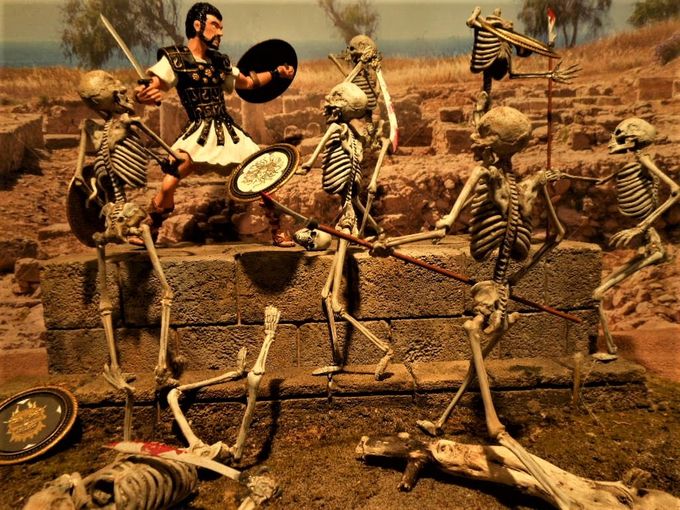 The body parts MUST be pinned and glued with AC or two part epoxy so there was a lot of drilling involved. I ended up using common pins to attach the pieces to one another which worked out fairly well. The main problem was that the parts were so heavy that they frequently became loose or detached particularly during the painting step.

Another problem I kept running into was attaching the swords to the skeleton hands that had the pummel already attached. There just wasn't enough surface area to get a good AC bond so the blades frequently broke off which proved to be VERY aggravating.

Because Zamac is quite brittle it is very difficult to bend thus affecing the number of poses you can put the skeletons in. I carefully back cut some of the knee and elbow joints so I could very slowly bend the limbs into different positions to add more variety to the scene. If this kit is every re-released, I hope they cast the skeletons in resin which would solve a lot of construction issues in my opinion. Although the castings for all elements of this kit were very clean, I'd be willing to put up with some resin flash to make the assembly less cumbersome.

As I have encountered in the past (and I don't know why this is), the shields for Jason and the skeletons were kinda clunky and not quite round. I ran into this issue when building the very nice Joe Laudati's Jason fighting the Hydra kit which you can check out in the Harryhausen tribute section on the site. That had a clunky shield as well but found an acceptable brooch replacement on eBay (where else?). Anyway, I went to Etsy and found some bronze brooches that were exactly the correct diameter for the skeletons. They also were slightly recessed so it was easy to mount the shield decoration decals that were included with the kit. I scanned the shield art decals on my printer and then printed them out on full sheet label paper which, after I cut them out, were stuck to the front of the shields.

I am fortunate to own a 3D printer which has come in very handy in fabricating replacement parts for kits like this. I ran a search in a site called Thingaverse where there are literally millions of object files you can download and print for FREE. If you have the cash (like $400) and make a lot of kits like I do, I highly recommend picking up one of these devices. It takes a while to get it running smoothly but once you get the hang of it, you can make some real neat stuff like my Terminator 2 bust found elsewhere on this site.

Anyway, I didn't like Jason's clunky looking shield so I went on Thingaverse and downloaded four different shields to replace the kit's version. Three hours later, I had four very nice scale shields to choose from. I ended up using one that had a three headed dragon on it which, admittedly, didn't match the film's version but I liked it all the same so that was what I went with.

Painting was pretty straight forward. I Goggled the film to get a sense of the color palette for the skeletons and Jason. I pretty much went on my own for the base although I added ground foam, real dirt and debris for ground cover. I have a blown out paint brush that I make great dried out weeds from along with real tea leaves for dead leaves. I avoided using any greens and bright colors to keep the scene somber.

Finally, I Googled images of Greek ruins to use as a background plate. Once I had what I liked, I sent it off to Vistaprint to have a vinyl banner made up which is what you see in the completed diorama.

All in all, the is a very nice looking kit but it is very difficult to build. I certainly wouldn't recommend it for a beginner but even a novice might have a little trouble with this one. I estimate I spent roughly forty hours in its construction which makes it one of my longest builds. Still, I think the final results were well worth it so if you get a chance to get a hold of one, go for it. 9/5/18 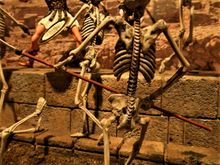 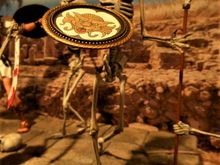 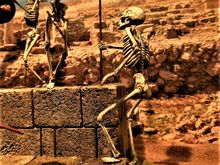 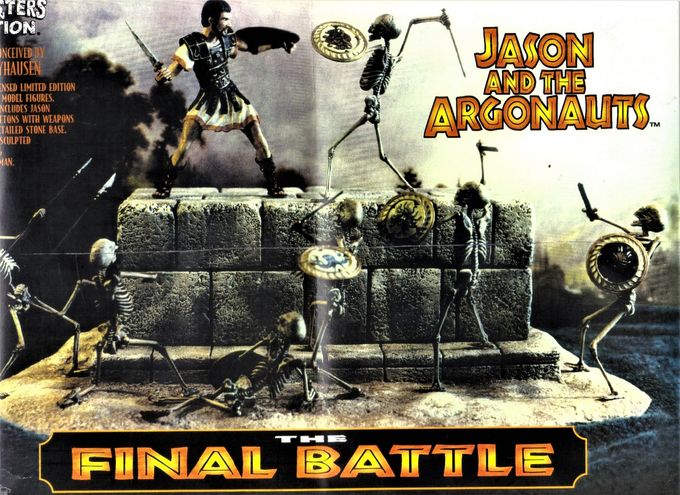 Amazing! Incredible work and skill to re create this scene! One of my favorites!