Snatched! - One Million Years BC 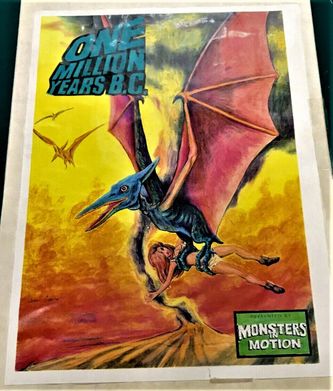 As some of you may have guessed, I'm a big Ray Harryhausen fan and I am continually adding resin kits based on his work to my collection. This is a kit I picked up on eBay from Monsters In Motion which is a sculpt by Joe Laudati and has been out of production since 1997 though my research shows it has apparently been reissued. My kit is from 1997 based on the included paperwork .

The kit is based on a scene from the film where our hapless heroine Loana (as played by Raquel Welch) is snatched by a pteradon and brought back to its nest to feed to her young. To allay your fears, our heroine manages to escape this grisly death.

The kit is pretty large with the pteradon's total wing span being thirty inches (!!!) but the wings are posed in an upswing position so it doesn't take up too much room. The Loana figure has nice detailing and actually resembles MS. Welch pretty well which shouldn't be a surprise since it was sculpted by Joe Laudati, one of the best in the business 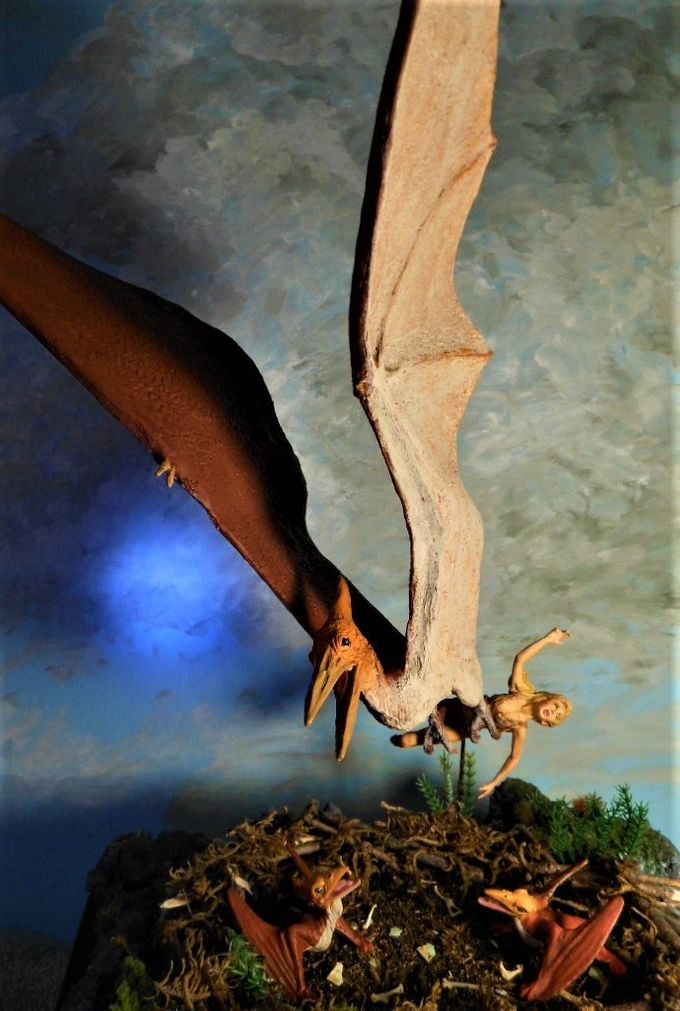 Having said that, I would regard this kit as being average in quality (the reissue MIGHT be better) since it needed quite a bit of attention to get rid of seams lines and the like. The display is simplicity itself with a undersized (in my view) base roughly five inches on a side and 3/8” thick. Because this kit is so tall, it has the tendency to tip over so I decided to make modifications to stabilize the display and make it a little more interesting. With this in mind, I came up with the idea of copying the scene where the mother pteradon is about to drop Loana into the nest to feed her young. I'm sure I'm not the first person to come up with idea and I'd like to see how others managed it.

Starting out with a 9” by 12” wooden plaque, I built up a plateau roughly four inches high with several layers of 1” thick insulation foam board. I randomly scored the foam board with a hobby knife and took away chunks to simulate eroded stone with a screwdriver. If you're not making a mess, you're not doing it right.

Once I was happy with the general appearance, I gave it a coating of Mod Podge to seal the foam board because I was coming back with a layer of gray primer from a rattle can. If you don't seal the foam, the solvents in the paint WILL dissolve the foam making a gooey mess.

I then made a roughly circular nest on top with small twigs I had gathered from my back yard and then added various in scale plant life from my foliage stash. In the nesting area, I placed some real egg shell fragments that I tinted a light blue green along with some mouse bones (really) to represent the remains of earlier pteradon brood feedings. I got the mouse bones on eBay in case you are wondering. 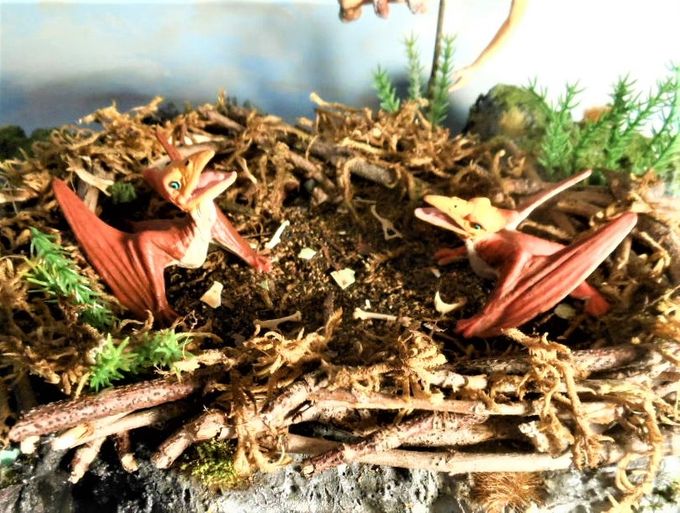 The pteradon nest I added to a.) provide a more stable base and b.) to copy the scene from the film. If you look closely you can see the rodent bones to suggest past feeding opportunities,

Though pteradon color scheme interpretations can be pretty exotic of late, I decided to stay with the simpler version as seen in the film with a raw sienna top color and a tan underside. I did the same with the two baby pteradons that I had purchased on eBay after I heated one up with a heat gun and re-positioned its head and foreleg to look like another animal.

I painted the Loana figure to resemble the fur 'bikini' in the film and placed her in the grip of the flying reptile before I mounted it with a piece of reinforced coat hanger wire inserted in its back side. I painted the mounting wire to disguise it as best as I could which came out pretty well unless you are really looking for it.

This build came out a lot better than I had expected which shows that even with an average kit like this one, you can end up with a fairly interesting scene if you give it a little thought and take your time. 4/10/20 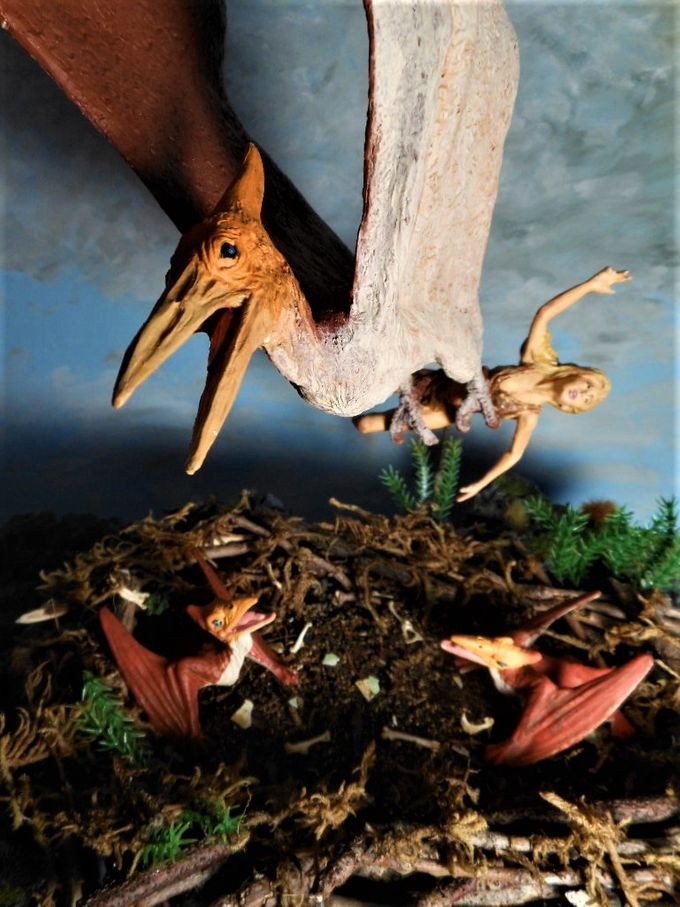