The Clash Of The Titans Medusa 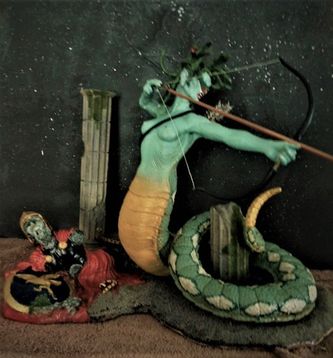 Clash Of the Titans (1981) was Ray Harryhausen's last effort in stop motion animation, and though not his best film (in my opinion), the Medusa sequence was easily the stand out in the film. Ray didn't animate the whole film with a number of the sequences “farmed out” to other animators but considering his age (he was 61 at the time) I'm sure it was the prudent thing to do.

The story of Medusa has several versions with the basic story being that the beautiful Medusa and Poseidon got randy in Athena's temple which caused the enraged Athena to curse Medusa with a head adored with snakes and a deadly gaze that would turn anyone to stone who looked upon her. Apparently Poseidon got away with the indiscretion which seemed to be SOP for the Olympian gods in those days. I always wondered if Medusa had any sort of conflict about turning people to stone. True, after her transformation, everyone seemed to be out to get her so I suppose it was self defense in a sense but I digress.

This was a roughly 1/12 scale Geometric vinyl kit I picked up on eBay. I'm not that much of a fan of vinyl kits since the detail is fair at best and mating joints can be a chore. The upside of vinyl is that you can have a degree of flexibility since the application of heat from a hair dryer or heat gun will allow a certain degree on manipulation which can come in handy.

The kit was composed of roughly twenty parts, most of which were the snakes in her hair. The two part base had a section with one of her victims cast into it with the other serving as a featureless platform for Medusa her (it) self. Medusa had eight body parts along with a seven part bow & arrow, several short arrow sections, a quiver and a nine inch long pillar that mounted next to the victim.

I'll sometimes do a web search of models I'm about to construct to see what others have done with a specific kit and this kit was no exception. Impressed with what I had seen, I decided to scrap the column that came with the kit and 3D print replacements that would be staged around the base. I was also taking with a paint scheme by someone from Hing Kong called “harto” who did a wonderful job on this kit.

I assembled the Medusa using two part epoxy as an adhesive. I drilled out the bow parts along with the Medusa's hands so I could slide them around a short piece of 1/64 brass rod which made the relatively fragile item easier to assemble and sturdier. I used white thread for the bow string that I tacked in place with AC glue. 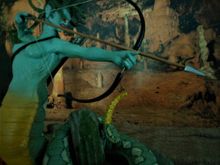 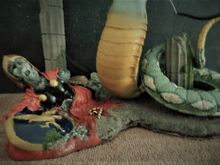 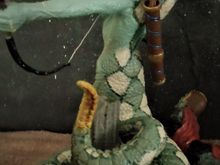 The victim side of the base was enhanced with a 3D printed Greek column that I placed where the original column was to go. After painting this section, I applied green and dark brown ground foam on the column and on the victim's shield and leg as moss to suggest that he's been here a while. I made a sword out of scrap parts and placed them in the display along with a few shields I had kicking around from other projects.

I went with a dark green/tan/olive drab palette for the Medusa in a rattle snake/cobra pattern on her back and lower snake areas. The 'human' part of the Medusa was painted a satin jade with dark green for her snake 'hair' with blue eyes.

I 3D printed a damaged column that my Medusa could wrap her tail around which also acted as an anchor for her which I secured to the base with hot glue. I drilled a couple holes beneath to give the glue something to hold onto.

So that's about it. Though not a favorite Harryhausen film, the sequence that this kit represents is still nicely done. 11/5/20 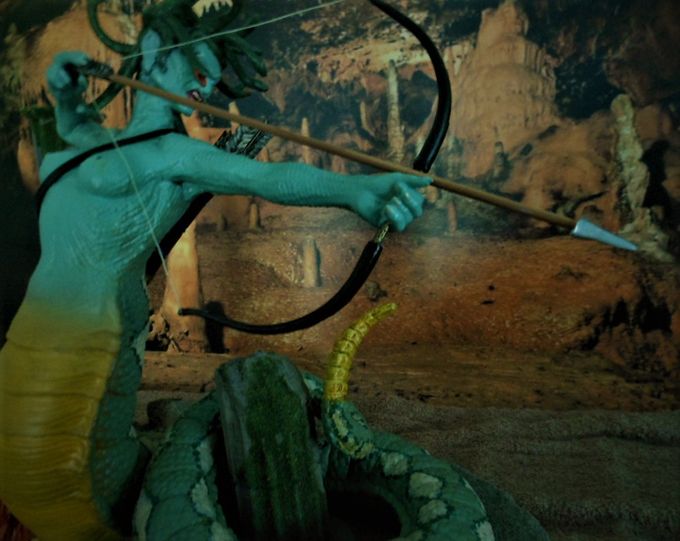