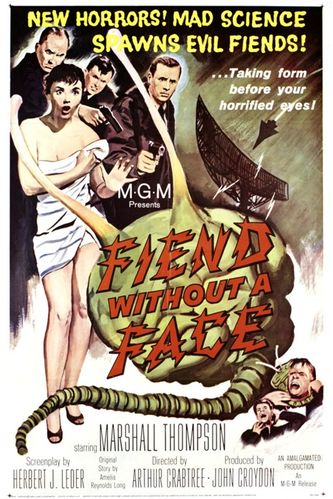 As the title above says, this is my take on the 1958 horror/science fiction film "Fiend Without A Face' starring Marshall Thompson and Kim Parker. I hesitate to call it a classic because I'm not sure that many people have even seen it. If you do get an opportunity, by all means check it out on You Tube at this link: (https://www.youtube.com/watch?v=-021Y09VK5g).

It starts out a little slow but once the action starts, it's non stop. I don't think I am exaggerating when I say I think this was the goriest film ever made up to that time. The stop motion animation is pretty good and though some of the effects fall a bit short, it is alot of fun nonetheless. The poster art for the film is at the right.

My diorama isn't based on a specific scene in the film but I think it captures the mood pretty well. It won an Honorable Mention at Resintopia III (2014) though I think EVERYONE won something at that convention.

The diorama is about 1/12 scale. Since I can't sculpt to save my life, I used the body of the Hunchback Of Notredame Aurora model as a starting point. I rotated the torso about 180 degrees and and then built up some of his pectorals with sculpting clay.. Everything else on him is pretty much left alone. The 'brains' are actually pencil erasers I found on eBay (eBay, ya gotta love it) and added spinal cords made from beads and wire tendrils in the front. I made the table & wall phone but bought doll house chairs, wall paper, wainscotting and utensils to finish out the scene (again on eBay). If you look carefully, you can even see a puppy on the lower left that wants to 'play' with a new 'friend (or should I say, fiend?). A little purple blood splashed about and viola'! the scene was complete.