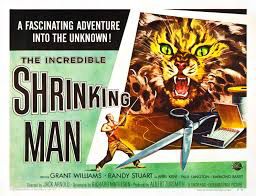 Although I would NEVER regard this film a B movie, I felt it appropraite to include it in the B Movie section since it does come from the same period and it was shot in black & white.

Having said that, as far as I know, there aren't any kits based on this movie so I decided to make a diorama of my own. As you can see, Scott Carey, the titular hero is in a battle of survival with a spider over a piece of stale cake. This Is a climatic scene in the film and very exciting to watch. The story is a sad one but it doesn't have a "cop out" ending usually associated with these types of films (It was only a dream!"). The special effects are pretty good for their day but some scenes are giggle inducing, such as Scott drinking from a coffee mug the size of a toilet bowl.

Anyway, I got the spider from a 1970 series (reissued in 2000) of monster kits called The Gigantics. They had a scorpion, spider, praying mantis & wasp which were loosely based on the giant bug movies of the 50's.  The spider was a very accurate model so it was a perfect fit for my scene. The hard part was finding a scale size man for the Scott Carey figure. I managed to find an ancient Egyptian solder figure that worked out pretty well since it was wearing a tunic that resembled Carey's hand made 'poncho' because we couldn't have him running around the movie naked, now could we?

The brick wall background are blocks of wood glued in a brick pattern and painted the appropriate colors. The piece fo cake was a piece of cake (sorry, I couldn't resist). Actually, it was a hunk of styrofoam painted yellow with Elemer's Glue frosting painted brown. A few dabs of blue & black made the mold.  I think it came out pretty good (& cheap too). 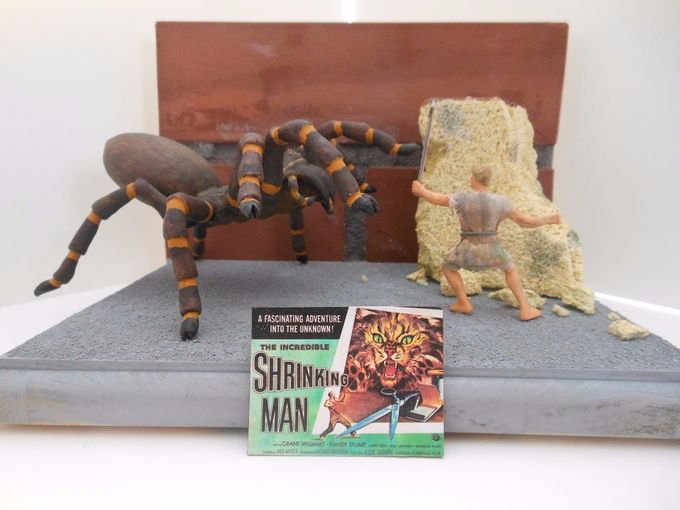 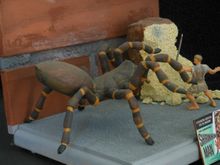 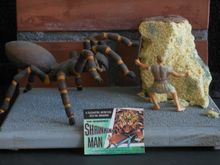 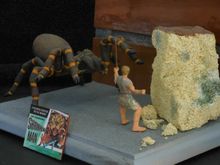 This is actually a diorama of my own. Read the text and it will explain how I did it.

Bring back wonderful memories of one of my FAVORITE movies!