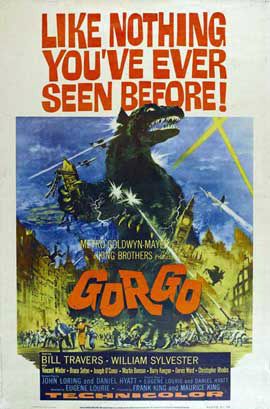 Here's an average kit based on the average British monster movie “Gorgo” released in 1961.  That's the original movie poster on the right. By my count, this was the fourth attempt by the Brits to tackle the “giant monster(s) on the loose” plot and, as it turns out, not that very good one at that. The other three fims in this category were “The Cosmic Monsters” (1958) (giant bugs), “Konga” (1961) (a giant chimp) and “The Giant Behemoth” (1959) (a giant radioactive dinosaur).

As it turns out, the director of “Gorgo” (Eugène Lourié) also directed “The Giant Behemoth” along with the far superior “The Beast From 20,000 Fathoms” (1953) which, aside from the great animation of Ray Harryhausen, is credited as being the inspiration of the seemingly endless supply of Godzilla films from Japan.

Anyway, back to the kit. From a sculpt by Phil Bracco, we get another average kit from the currently shutdown company Resin From The Grave. As I have written in the past about RFTG, they've some medical issues at their end which caused the closure but I'm told they MAY start up again at some undetermined date in the future.

The shutdown was unfortunate because they had a very nice series of resin kits from the likes of Joe Laudati and others which, despite poor production values at RFTG's end, had some of the most dynamic sculpts out there in my view. My two favorites of these kits (which can be seen elsewhere on this site) are Ray Harryhausen's Ymir vs the Elephant and Willis O'Brien's King Kong vs the T-Rex (note that this kit was advertised as Giant Gorilla vs the T-Rex presumably to avoid copyright issues)

Though there are about four kit versions of Gorgo out there, this one is a bit different in that it offers BOTH the adult monster (mom or dad) along with the baby dinosaur, Gorgo itself standing on a base of rubble and debris. The sculpt is very accurate for each of the creatures which turns out to be unfortunate (in a sense) because the screen version is probably one of the worst “guy in a giant dinosaur suit” movies around.

The kit's assembly is pretty sraightforward but I must say the finished adult creature is pretty large standing a tad under a twelve inches tall. The manufacturer's wisely made the torso hollow on this bad boy which cut down on the kit's weight considerably. As is my experience with other RFTG kits, I was forced to remove and make my own teeth for the adult Gorgo simply because the casting process resulted in missing or incomplete dentures so I ended up using toothpick replacements. I also had to make my own foot spurs for the 'baby' Gorgo which were also missing. Not a big deal but a little irritating since I had the indentical issue with another of their kits.

For both animals, I painted each with a very dark green and dry brushed an olive drab on each to bring out the surface details. Like the film, I made both of the moster's eyes a blood red color with a slash of black for their pupils. The moderately detailed satnd was base colored with a dark grey primer from a rattle can and then I went back and highlighted different features with drab browns, tans and greys with silver highlights for girders and cables.

This kit went together pretty quickly and matches the climatic scene from the film when Mom comes to trash London town to rescue baby Gorgo. Despite that clever plot element, it's too bad the film suffers from such a ridiculous looking monster. Now CGI would have fixed that, right? Right? 5/27/2017 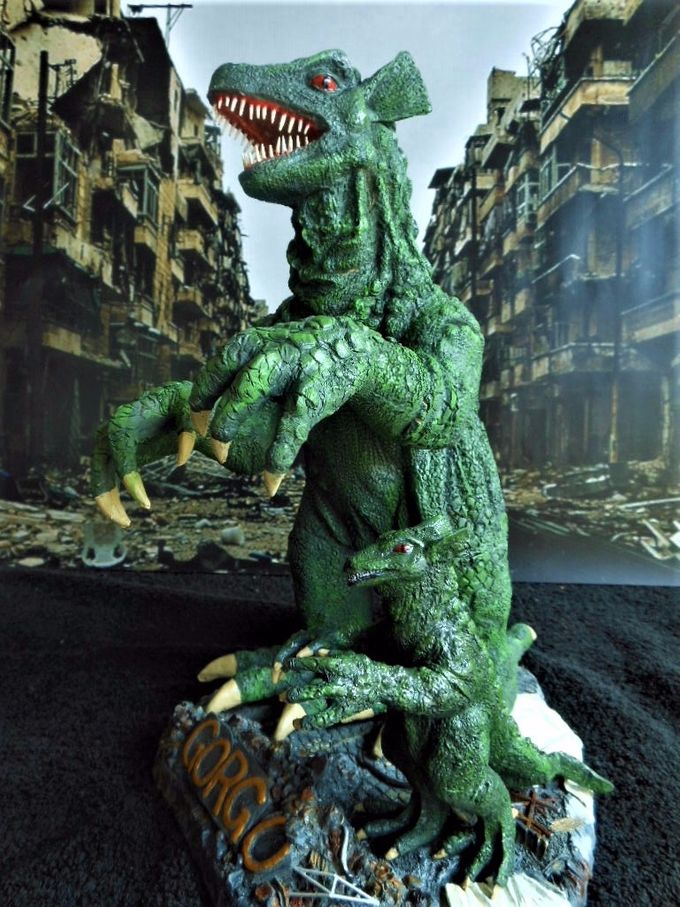 Gorgo Senior with Junior. Pardon the out of scale background but that was all I had available during the shoot. 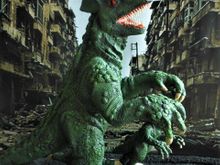 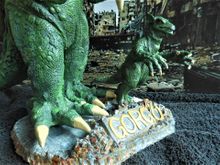 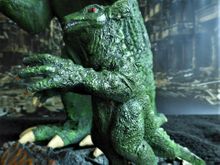