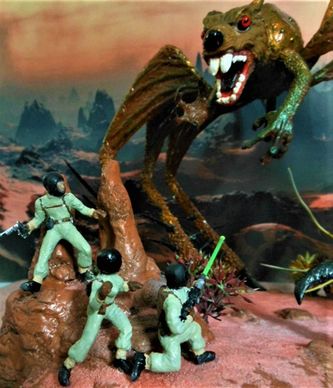 Here is a very nice kit from Alchemy Works ($189.95 for the Deluxe version) taken from a scene in a not very good film from 1959 called “The Angry Red Planet” which I saw when I was a mere lad of nine. The trailer and lobby posters did a great job in promoting this film but the final result was a pretty boring affair considering the number of Martian monsters on hand. They also were touting an effect called “Cinemagic” which was curious type of 3D effect where, whenever the characters were on the planet's surface, an irritating red hue permeated the scene giving some items (trees, rocks, etc.) the appearance of standing out from the screen. This effect was achieved without requiring the audience to wear glasses so it was kinda neat in that respect but uninteresting as the film wore on.

Anyway, as I said, the movie had a number of alien monsters to hopefully liven up the plot (it didn't work) but I'll give them and 'A' for effort. One creature was a gigantic amoeba that had a huge eyeball on top of its body that rotated around as it moved in pursuit of its prey. Another was a static three eyed Martian that just glares at the Earthmen but does little else aside from communicating telepahically

Finally is the so-called Rat Bat Crab Spider monster which looks like, well, an amalgam of a giant rat, bat, crab & spider. The producers went with a marionette to show long action shots ol the monster but went to full size claw sections in close ups as it attacks the astronauts which must have eaten up half the production's budget. As clumsy as it was on screen (not to mention how it was an antethisis to the intelligent design argument), it was still interesting looking monster in a car wreck sort of way.

Which brings us to this very nicely sculpted kit from Monsters In Motion. The sculpt was by Chris Lynch and this is the first time I have to say the kit is better than the film on which it is based! This DELUXE version of the kit is very nicely made, requiring next to no time spent on filing to clean up mold seams lines and even had preinstalled metal pins for the monster's delicate leg sections, something I had never encountered before. The base is also nice which, along with the name plate, matches the look of the film very well. The kit has 48 pieces, most of which are the leg spines. I had to use my heat gun to soften and bend the spindly legs so that they'd end up in positions that resulted in a stable display of the creature which likes to tip over because it is a little top heavy.

I happened to have a background which was a perfect fit from the scene in respect to the terrain & color palette of the scene. The photos came out pretty good I think.

The three astronaut figures were very clean requiring next to no clean up but were kinda clunky with just fair detailing. I did some filing on the weapons to make them look a little less boxy and epoxied a 1/16th rod of flourescent green plastic to suggest an energy beam of some kind that blinds the monster in the film. Painting was probably the most time consuming aspect of this build but the whole process was very enjoyable which is the whole point, isn't it? 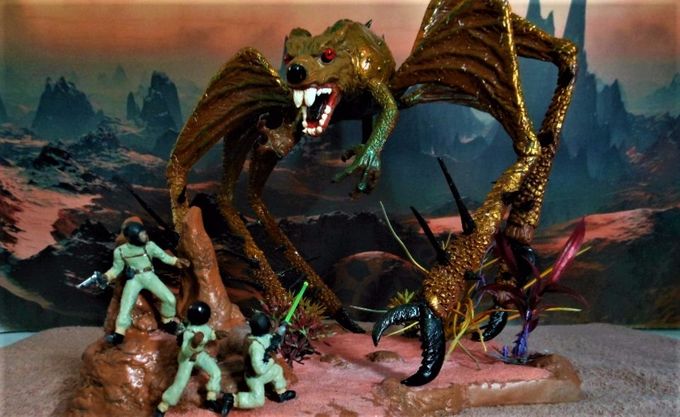 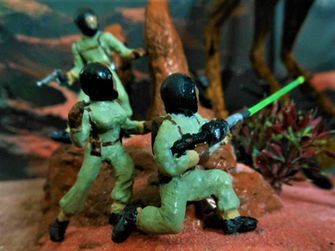 Close up of the figures. I added a short length of 1/16" flourscent green rod stock to simulate a ray being shot out of the astronaut's ray cannon. 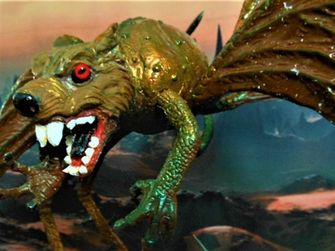 Close up of the rat, bat, crap, spider monster, a car wreck of an alien if there ever was one.