Fiend Without A Face: Attack In A Country Barn 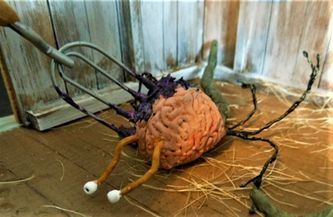 This my second go at a scene from one of my favorite 'B' horror films of the 1950's, “Fiend Without A Face”. I sold my first version of this scene on eBay (something I regret now) so I decided to make another but with a slightly different setting. This particular version actually does copy a scene from the film where a farmer is being attacked in his barn although, at this point in the film, the monsters are still invisible.

I thought by adding a fiend crashing through a window while the farmer is unsuccessfully trying to prevent another from sucking his brains out would bring more action to the scene. I also added a snarling dog facing off one of the brains. How that encounter turns out I will leave up the viewer's imagination.

As before, I went with the Aurora “Hunchback of Notre Dame” kit for the unlucky farmer and pretty much altered him the same way as I had in my original version. So as not to repeat myself, you can read how I did those changes by going to the “More” tab above and selecting the “Fiend With Out A Face” title under the “B Movies” list.

The base is a 11” x 11” scrap section of pine which I cut diagonally to make a triangular base. I scribed lines in the base to suggest floor boards of varying widths and made small holes to simulate nails. The rear walls are stick built using balsa wood stained brown and then sloppily painted with flat white paint to resemble old and worn whitewash. I purchased a dollhouse window on eBay, cutting it down to size to fit the scene and inserted into the wall. The various tools and lantern are dollhouse props and I repurposed the ropes and gear from the “Hunchback” kit.

I made the brains the same way I did in my first version although I had a pair of resin castings along with the pencil eraser kind which I used in my first try. I went with a different paint scheme this time, making them a little more fleshy looking by using coral colored craft paint. I then gave them a light wash of red to bring out the brain detail and the spindly 'arms' I made out of twisted wire and painted gloss black. The tails were made from two part epoxy clay which I segmented before it had set and then painted them a flat medium gray.

Probably the most difficult of the four brains was how I was going to make it look as though one of the creatures was crashing through the window? As it turned out, it was easier than I had thought. I first broke up the window's muntins (those narrow stick like things between the panes of glass) like they had been pushed out into the barn. I then glazed the windows with plastic panes in various degrees of breakage, again staged to look as though they were being pushed in by the creature launching itself into the room. I finally drilled a hole in the window sill and stuck one of its arm 'fingers' into the hole and positioned the rest to give it a sense of pushing itself mid flight into the room.

As the final touch, I dusted the floor with short pieces of twine to look like straw and misted the base with hair spray to adhere them in place. NFS 1/21/2018 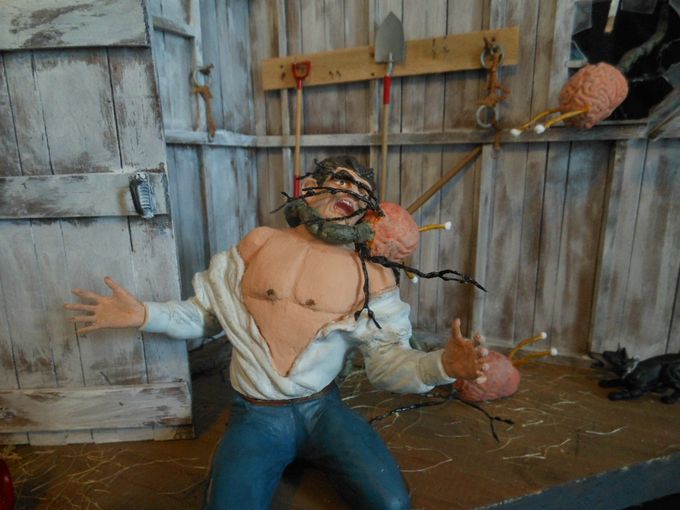 A "framing" shot to get an idea of the whole scene. Note the brain in the upper right, bursting through the window to join in all the fun. 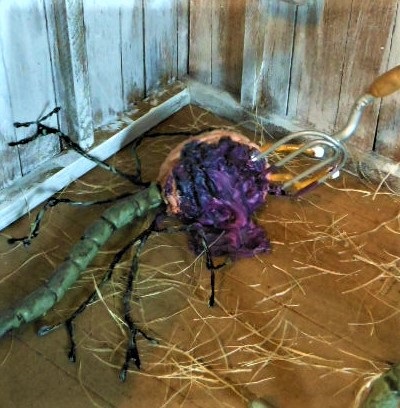 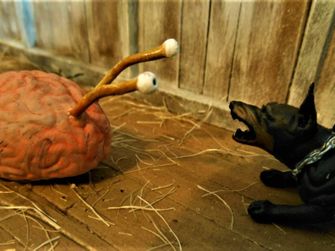 Close up of the dog confronting one of the fiends. 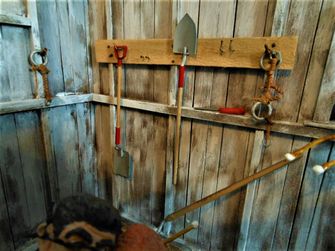 Close up showing the wall detail. 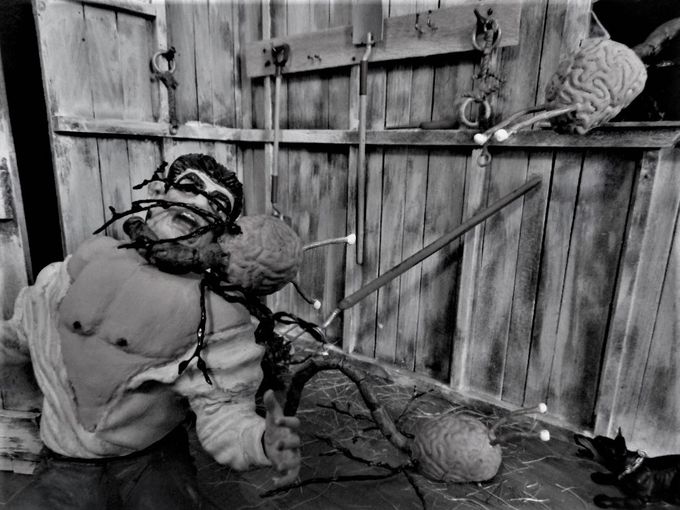 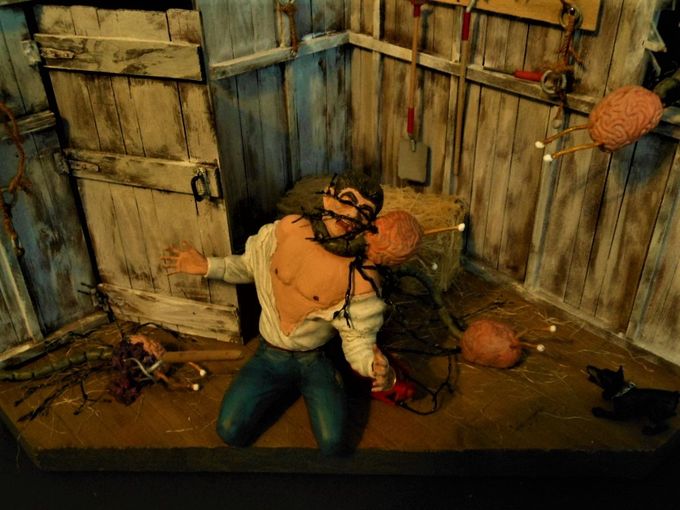 A 'God' shot showing the scene with a few items added or rearranged for an overall superior visual impact. Click once for a larger image.