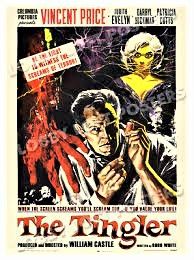 The movie poster for this film. I never saw the yellow lady in the film.

“The Tingler” was a William Castle black and white film released in 1959 starring Vincent Price. Without going into too much detail, the plot concerns a research scientist (Price) who has surmised that a tiny creature or parasite living inside our spinal column grows rapidly when its host is subjected to extreme terror or stress and causes the host's death by constricting the spinal column or some such nonsense. Why this creature hadn't ben discovered until now is never explained.

William Castle was renowned for these types of gimmick films where, in this case, some theaters had electric buzzers installed under the seats that would go off whenever the Tingler was on screen, thus illiciting a response from the theater patrons to add to the movie going experience. The fact that Vincent Price could make such a film without bursting out into laughter is a testament to his professionalism.

In any case, there are a number of kits out there based on this film but I happened to come across an “upgrade” kit for the Aurora's Dr. Jekyll and Mr. Hyde plastic model kit from the 1960's which substitutes a resin cast partial figure of Price with the Tingler on his arm. Alas, I think I am literally the LAST person to get this upgrade since I purchased it days before the company (COPProductions) had ceased production, undoubtedly due to the passing of its owner, Tom Parker, in 2017.

Anyway, the nice but pricey $45 resin kit came with Price's torso, arms, apron, two name plates and a head that is a very nice representation of Price in his day. The Jekyll and Hyde parts you would use from the Aurora kit would be mostly decorative in nature such as the floor, table, rat, spider, flasks with the exception of the Jekyll/Hyde legs. I suppose you could make your own Price legs and dispense with the Aurora kit altogether but I had a Jekyll kit kicking around from another project that didn't manifest itself so it finally found a raison d'ertre so to speak. 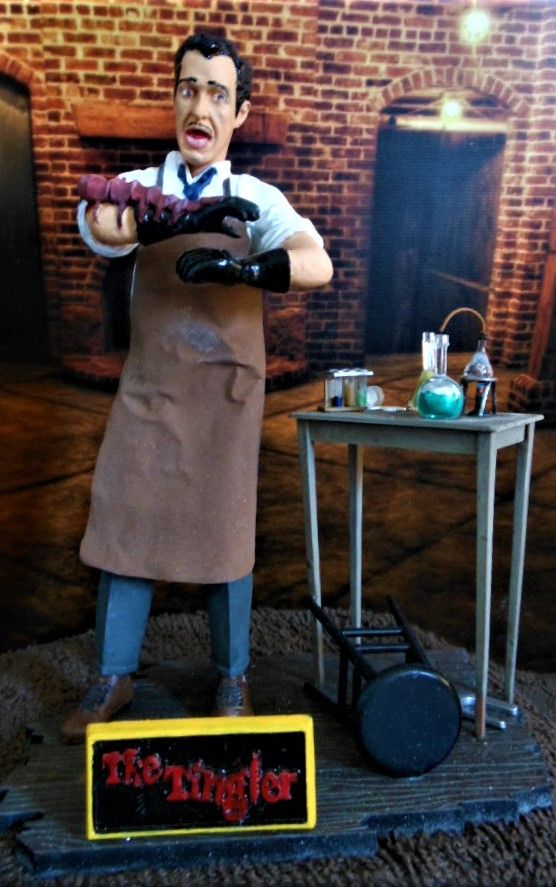 The kit was nicely cast although some clean up of casting lines was needed here and there but not too objectionable. After cleaning up the parts and washing them in soap and warm water to get rid of any mold release agents, I pinned the arms to the torso, I kept the head separate so I could paint it 'off line' so to speak which is much easier. I should mention that the head's likeness to Vincent Price is quite good.

I tried something a little different this time in that I mounted magnets in Price's shoes and on the underside of the base where he would be standing. The magnets I had were fairly strong so the Price figure was pretty stable. I had never done the magnet thing before although I had seen it done on a few resin kits. I don't know if I would use this technique that involved heavy resin parts but it worked just fine here.

As I mentioned, the kit came with two Tingler name plates. They differed in that one had a fancier font and used the Tingler creature itself for the “I” in the name plate. This was what I used.

Anyway, this is a nice addition to my collection of “B” horror movie kits. There are other conversion/ upgrade kits for other plastic Aurora kits out there like this one such as two versions of the Fly, Hunchback, Wolfman and so on. The prices are usually in the $25 price range which makes The Tingler the more expensive of the bunch but since it is no longer in production (at this writing) it is a moot point. 3/28/21 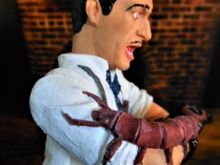 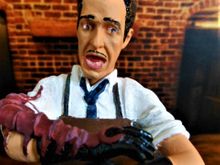 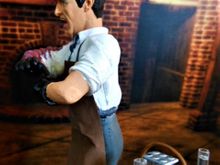 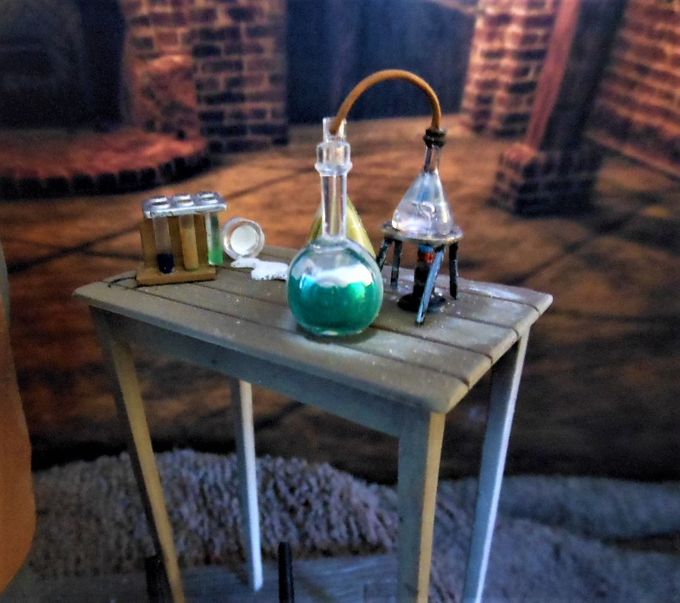 Detail shot of the laboratory table. I didn't care for the Bunsen burner stand so I made one out of a pairs of hair pins and a washer.