Monsters Of The Movies "Return Of The Fly"

Here's the box art for the kit.

This is a little inexpensive 1/12 scale resin kit from the Monsters Of The Movies line. I can't be sure but I think these kits are OOP but you might find one on eBay like I did with this one. There are about nine parts for this kit, one of which is the base. The kit is resin although the mandibles are made out of pot metal which seemed odd to me since there wasn't that much detail to require using that material.

The base is littered with debris to depict a scene near the end of the film when the Fly (played by Brett Halsey) destroys the teleportation device so as to prevent any future attempts to experiment with it. The figure is a simple affair with the main body, two arms (one normal and the other a fly appendage), a head and the aforementioned mandibles. There is also an out of scale scale clap board included with the title “The Fly” on it which is incorrect since this kit is for “The Return Of The Fly” for you purists out there. 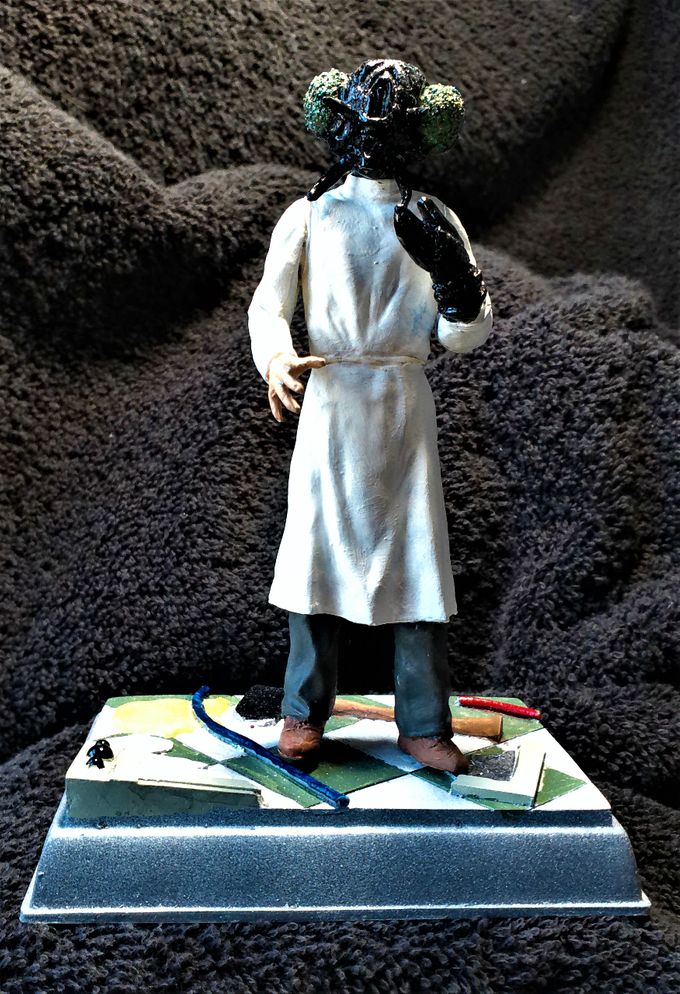 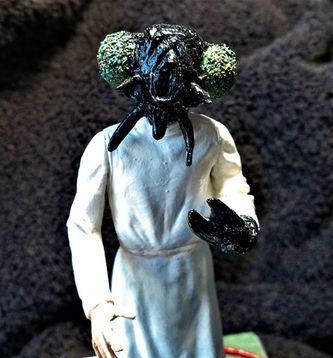 Painting was a fairly straightforward affair though I wanted to add a little more to it. In the original “Fly”, the head was somewhat larger than a human head whereas in this sequel the head is tremendous to the point where one wonders how the hapless scientist could even stand up much less walk around with it. Anyway, I wanted to present a compound eye effect like a real fly, so I coated the eyes with PVA glue and then sprinkled them with very fine sand. Once the glue had set, I dry brushed them with iridescent gold, purple and green. I think it came out pretty good.

This is a nice kit though I wondered why they went with such a small size, roughly six inches in height with the base. I would have preferred that MOTM had come out with an 1/8 scale Aurora sized monster kit which would have looked great posed with my other figures but perhaps there were financial reasons for that choice. 1/6/22 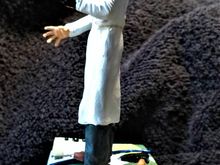 Left side view of the completed kit. Click for a larger image. 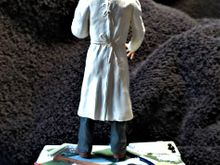 Rear view of the completed kit. Click for a larger image. 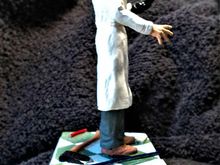 Right side view of the completed kit. Click for a larger image.