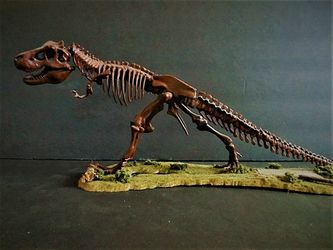 These are very old models which came out in the mid 1950's. When my father came home with the Brontosaurus (yes, I know they don't call it that anymore), I was thrilled to pieces because I was seriously into dinosaurs at that time (and still am).

This series of kits, though pretty crudely cast, were the ONLY prehistoric animaln kits you could get in those days. Marx had a nice line of solid plastic animals (ya, I had those too) but they were meant to be played with and not displayed.

Anyway, there were four kits in the series: the Brontosaurus, Tyrannosaurus Rex, Stegasaur and the Mastodon. Some years later, they came out with a Neanderthal Man which was pretty neat because you had the skeleton on one side of the stand and a 'flesh & blood" man on the other!

If you do some real digging, you can find these kits on the web and the Glencoe company is still around but they don't answer the phone (I tried).

The kits portray the skeletons posed as they were thought of at the time (T-Rex standing erect, dragging tails, etc) so purists out there may object to their appearance. The image above is the out of the box, no adjustment build of the T-Rex kit.

If you don't mind a lot of drilling & filing (the T-Rex skull is pretty much a solid chunk of plastic) you can make these models presentable but it does require some effort on your part.

Below is a slide show of three of the most popular kits I have in my collection.

Nice to see others appreciate these old kits. Minor correction: The Glencoe kits are re-issues of ITC kits which were made by the Ideal Toy Company. But, Palmer did make its own Bronto and a Mastodon.

Early-mid 1960s and I was obsessed with these kits! I had the Tyrannosaurus, and some friends, neighbors, cousins had the others. Challenging builds, emblematic of that era. Thanks for sharing!

Thanks for visiting, John. I have a section devoted to the Aurora kits from that same period you may like. Go to the 'More' tab above and look for the "Aurora Kits" area in the drop down menu.