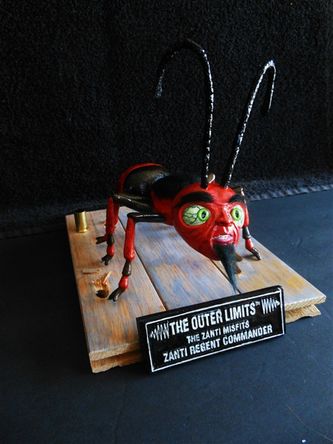 Here is an average resin model kit from Dimensional Designs of, perhaps, the best known of the Outer Limits episodes, “The Zanti Misfits”. The story, which aired on December 30, 1963, is an odd one in that the US Government is allowing a ship of creatures from the planet Zanti to establish a penal colony of sorts in the southern California desert. Although not explicitly mentioned, it is hinted that the Zantis would be willing to share their advanced technology with Earth for this 'favor'. One caveat is that all contact with the Zanti penal colony is expressly forbidden and ANY violation of which would rain destruction down on the planet Earth from the Zantis.

Of course, this all has to fall apart in some way or there wouldn't be a story. Enter Bruce Dern (very early in his career) with his curiously unappealing girlfriend, both of whom are on the lam for a bank robbery. They run down a guard stationed in what I'll call the Zanti zone, where they stumble upon the Zanti ship. Bruce decides to investigate it (bad move) and is promptly killed by one of the rat sized Zanti insect creatures. His screams can be heard over a radio that is monitoring the landing site at the US Army base nearby which is very disquieting for all those who can hear.

The Zanti ship then takes off and lands in the middle of a ghost town called Morgue (get it?) where a fierce battle breaks out between the rampaging Zantis and the soldiers. Before you can say “Oh oh”, all of the Zantis are slaughtered with a handful of soldiers either being killed or injured.

Fearing the worst, the remaining soldiers and scientists listen as the Zanti leaders (via radio) acknowledge that their threat to destroy our planet was just a ruse. It seems on the planet Zanti, they have reservations about killing their worse criminals, so being well aware of our race's perchance for violence, they decide to send the criminal element along with their corrupt guards to Earth, where they will surely meet their doom at one point or another. We are then left with the Zanti thanks for solving their moral dilemma. As I say in the Outer Limits introduction, this show routinely explored the human condition, warts and all, and “The Zanti Misfits” is probably one of the better examples of that.

This kit is one of the official Outer Limits line of model kits based on the series from Dimensional Designs. Here is their link:

The Zanti model is actually a full scale model measuring a bit under six inches in length. It went together easily although is needed quite a bit of prep work to fill air bubble holes and file off seam lines. The base was very plain to me (what else is new) so I happened to have some real oak flooring kicking around that I substituted for the original flat piece of featureless resin. I also added a few bullet holes and .45 caliber shell casings to simulate the final battle scene of the program.

Although, the Zanti beard and eye brow hair is based on the actual show, I'll be the first to admit it does look a little silly. I attached it with Elmer's glue so if I decide it is a bit much, I can remove it fairly easily if need be.

Yes, they had very odd looking aliens in the series. My favorite is the Thetan from "The Architects Of Fear" story which is considered one of the best episodes.

I'm 66 and this the weirdest thing I have ever seen

Hello I s, I'm a bit older than you but I must agree that the Zanti Commander is odd. The episode he appeared in gave many folks nightmares after seeing it, including my little sister & brother.