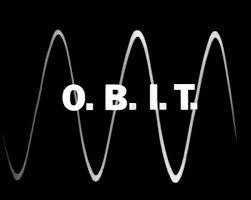 “O.B.I.T.” which was aired on 4 November 1963 is one of the more offbeat Outer Limits episodes in my opinion. The story concerns a television type of device that can remotely view and ease drop on anyone which it is focused. Its existence has been the cause of a murder on a military base that is rife with suspicion and paranoia. Although O.B.I.T. Is an acronym for Outer Band IndividuatedTeletracer , I can't help but wonder if the writer(s) really had a shortened form of 'obituary' in mind when they penned the story. Click here for a more complete plot summary:

Anyway, the monster in this story is fleetingly shown until the conclusion where it is revealed to be a cyclopsian horror captured nicely by Dimensional Designs. The resin kit is pretty straightforward having only five pieces, one of which is the rather plain base. After a little clean up and puttying the occasional seam line or hole, assembly went smoothly. Since the Outer Limits was filmed in beautiful black and white, the creature's color palette was pretty much up to me so I used a greenish gray for the skin. I then used an iridescent green as a base coat to fill all the folds and crevasses of the creature's uniform and then came back with a dry brush of iridescent blue for an alien look.

As is the case with all the Outer Limits kits, the base a flat slab of resin with a copyright name plate cast in place. I decided this just wouldn't do, so I got a hold of some black and white checked floor tile from a doll house accessories distributor on eBay. I laid the tile down in a skewed position to give a sense of something is amiss to the viewer. Then I drilled holes from the underside of the base into the soles of the figure. Then I drive either nails or screws up through the holes in the feet for a stable yet removable attachment to the base.

As I stated elsewhere in these pages, these Outer Limits kits from Dimensional Designs are limited runs and as they are sold out, that's it. The upside is that they are probably the least expensive resin kits out there ($45 plus shipping) so you may want to grab a couple, so when they are sold out, you can sell them for $100 a pop on eBay. Here is the link to Dimensional Designs web page: http://www.dimensionaldesigns.com/index.html

This is a 'posed' publicity image for the show in glorious black & white. 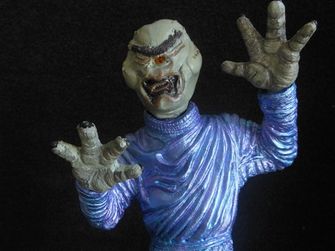 My recent build up of the OBIT creature (it had no name) in glorious blue and grey.