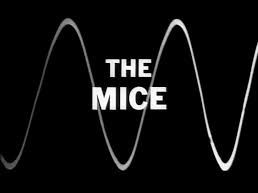 Airing on January 6, 1964, “The Mice' is probably one of the least satisfying of the series but probably has one of its creepiest aliens resembling a walking jelly fish or bipedal booger...it's your call. In brief, the plot involves an exchange program via teleportation of an alien called a Chromoite with a convict volunteer, Chino Rivera (played by Henry Silva). Once Chino gets an eyeful of the alien, he decides that teleporting to a planet filled with such monsters isn't such a great idea after all and backs out of the agreement. Oddly, the Chromoites don't seem to be concerned that much with the unfolding events and seem to be content in allowing the exchange to be one way for the time being. To check out at the rest of the plot, click here:

This resin kit, another in the Dimensional Designs' Outer Limits series is pretty standard for the collection. The five 'primary' parts are comprised of two claw-like hands, upper and lower body sections and the plain base. It also comes with about a dozen narrow resin strips that are supposed to be the long, floppy strips of flesh that hang from the Chromoite. There is also a patch of fuzzy cloth from which the spiky features protruding from the upper torso are to be made.

Neither of the last two features appealed to me so I decided to make my own flesh strips by carefully extruding beads of clear acrylic chalking compound into a sheet of stiff aluminum, the kind that disposable pans are made of. I laid out a random length of the sealer (say two inches) onto the aluminum and then doubled back along its length three of four times until I had a strip roughly two inches long and half an inch wide. I made about a dozen of these strips, anywhere from one to seven inches in length. Once the strips cured, I selected the ones that fairly matched the aforementioned rejected resin parts and attached them to their corresponding area as shown in the instructions with the clear chalk sealer.

For the spikes, I had a cheap paint brush that you can get at the dollar store that had tan bristles. I cut off random lengths, most within the ½ inch range and attached them to the appropriate locations on the creature, once again using the clear chalk as an adhesive.

For the paint job, I really departed from the norm by using something called 'Gallery Glass', a very thick acrylic paint that is used primarily to make faux stain glass windows. It comes in dozens of colors and can be found at AC Moore or other craft stores and also on line. Once it dries, it is clear and flexible.

I decided to paint the creature's main body an iridescent gold (regular craft paint) and then randomly applied one of the Gallery Glass' darker greens to cover the entire creature along with the flesh strips. This process is a bit time consuming because the Gallery Glass takes a few hours to dry completely and you should proceed slowly to see how each application looks. You may want to apply multiple layers of the Gallery Glass to get a darker effect but bear in mind that it will remain clear no matter how many coats you apply.

As with the other Dimensional Design kits, I found the plain resin base to be kinda ho hum, so I scribed parallel lines diagonally across the surface to resemble a wooden floor. Then I randomly scribed across each 'plank' to suggest different board lengths. I had some brass doll house nails kicking around so I painted them a flat gray and then drilled holes at the plank ends to insert the brass 'nails'. Next came some random pencil lines to simulated the wood grain in the floor, mount the title plate and my Chromoite was ready to display by drilling holes up through the base into the figure's feet for mounting screws or nails.

On a side note, I noticed that the kit's sculptor listed as a Greg Nicotero who, unless I am mistaken, is one the special makeup effects artists along with being a director of several episodes of the hit TV show, 'The Walking Dead''. I posted this question on his fan site if he was in fact the creator of this kit but at this writing (5/28/16) I haven't received a response either way. 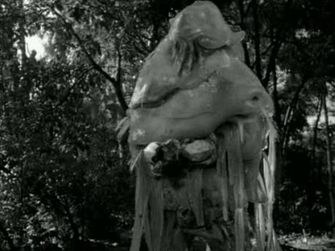 A screen shot of the teleported Chromoite. One wonders if the creature's appearance is the result of a botched transmission a la 'The Fly'. 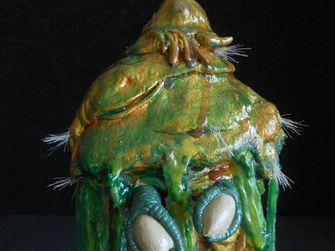 My take on the creature. I think I captured the walking booger look quite nicely, don't you?