Demon With A Glass Hand

Here's another of the resin kits from Dimensional Designs based on the original classic TV's science fiction series “The Outer Limits”.  In this case, it is of the Trent character as played by Robert Culp in what is regarded as best in the series, “Demon With A Glass Hand”.  The story, written by Harlan Ellison, is about a man (Trent) trapped inside an old office building being hunted down by aliens from the future. The Trent character has no memory up until the last few days which is only remedied by his acquiring "fingers" from his alien hunters which he inserts into his incomplete glass hand hence the title. Culp is terrific as the hunted loner only to be surpassed by his other performance in another great Outer Limits classic story “The Architects Of Fear”.

The simple resin kit is essentially of Trent posed in a defensive posture holding a gun. Unfortunately, the cast had dozens of tiny pin prick bubbles on many of its surfaces, an annoying trait of DD kits but its very low price ($59.95) makes up for it to a certain degree.

The sculpt by Curt Chiarelli is nicely done and bears a pretty good resemblance to Robert Culp. Curiously, he chose NOT to show Trent'sglass hand but went with a gloved version.  Admittedly, this does follow the story but undercuts the story's title which is about a glass hand!  Me being me, I decided to remedy the situation by providing a glass hand on my own. I ended up cutting off the gloved version (to be used later) and fabricating my own from clear resin and plastic sprue forthe fingers. I drilled out the fingers and inserted small pieces ofwire to simulate the gizmos inside.

Before painting the Trent figure, I applied several coats of carpenter's glue to fill the micro bubbles I mentioned earlier. Once I achieved a bubble free surface, I used the yellow/red/blue wash technique on the figure's face and hand. This terrific technique results in a very realistic skin tone if done correctly.  Here's a video demonstrating it: https://www.youtube.com/watch?v=zWjuwZ0oM9g 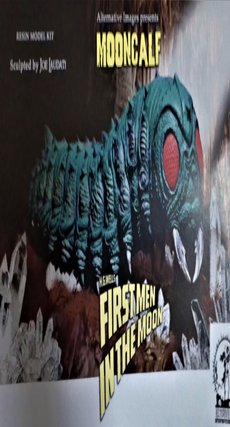 This is the box art for this kit. 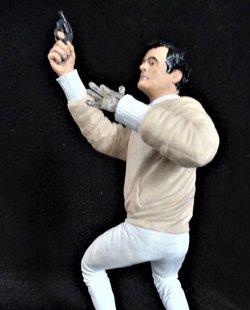 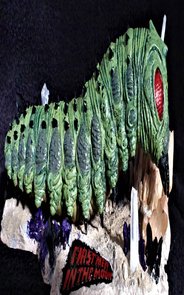 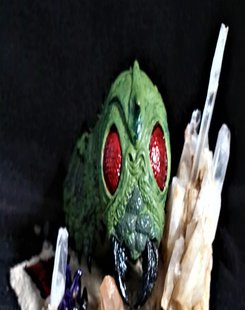 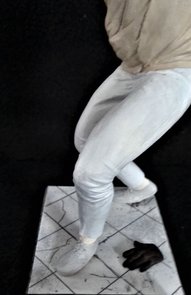 Though the series was shot in black and white, which would normally allow me a lot of latitude in choosing my color palette, in this case most of Trent's wardrobe was very light almost suggesting he wore only white.  I decided that I wanted to add something more interesting so I went with a very light tan for his jacket, sky blue for his shirt, white cuffs and socks, very light gray for his shoes and flat white for his pants. The name plate was done in gloss black with chrome lettering, probably the most time consuming part of the build.

I scribed the base with a series of parallel groves and cracks to simulate tiles and then dry brushed dark brown for dirt and crude in the mortar lines. I also salvaged the glove I had cut off earlier by painting it dark brown and glued it to the base as if Trent had just discarded it.

This kit certainly isn't best or the most interesting of the Dimensional Design series but I can appreciate that the manufacturer provided pretty good kits at very reasonable prices. The downside is that as the kits are sold off, they don't restock them so grab them while you can! 12/14/2022

Addendum: I have completed making a replica of the glass hand that has both light and sound FX. Click on "The Glass Hand" label in the Outer Limits section of this web page to check it out!