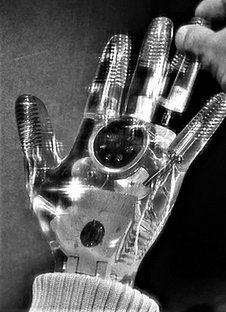 I had recently watched the classic Outer Limits episode, “Demon With A Glass Hand” perhaps for the twenty fifth time, when I decided to take a shot at creating a glass hand of my own. Others have done the same with impressive results so a high standard had already been set so I hoped that I could achieve and perhaps, surpass other's efforts.

I studied as many stills of the hand that I could get my hands on, both from the TV show and other's attempts. I decided that I didn't have the skills to copy the hand prop exactly such as the three detachable fingers but I knew I could get the talking part down with my standby source for electronics, Starling Technologies.

A side note: On reflection, the concept of detachable fingers that were essentially memory chips needed to complete the computer brain housed in Trent's hand is amazing to me, considering that this episode aired in 1964! Harlen Ellison's predictive description of a miniature computer almost 20 years before they became common place in the business world and the home is truly remarkable.

Close observation of the fingers revealed what appeared to be compression springs inside them though, as I

said, they were supposed to be computer components or memory chips. I did a lot of searches on the Google machine for springs with the only viable local source being Lowe's hardware stores. I purchased several but they were just a tad too big for the size of hand I wanted to build. I came across a company on New Jersey called Swisco (a parts supplier parts storm window & doors) which had springs in the shape and size I wanted, roughly three and four inches long.

The next step was to find “stuff” that looked like the items inside the original prop. Though I wanted to copy the internals of the hand as closely as I could, I realized that was all but impossible but I found a few that would pass. These ranged from a small block of balsa wood, coat hanger wire, a telephone speaker, a couple Dremel steel cutting wheels, small metal parts from my stash and so on.

Once I assembled all the parts, I inserted them into the vinyl glove which I had suspended from a loop of wire mounter on a sheet of plywood to hold it upright. After I had positioned everything to my satisfaction, I did a final pour, hoping for the best. Alas that was not to be. While I had inserted some of the parts, I had accidentally punctured the glove roughly 3/2 of the way up which leaked out. Fortunately, I had placed the glove apparatus in a plastic pan that caught all of the spill. I was now forced to wait 72 hours for the partially filled glove to cure at which point, I plugged the leak with hot glue and topped off the glove with resin up into the wrist area.

Photo of the actual film prop

An early stage of construction showing initial pour which became a serious leak. 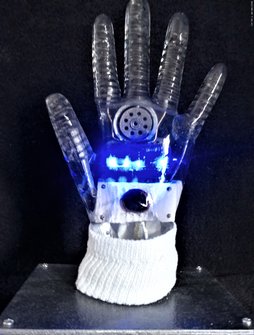 Completed hand which strobes during monologue. Note burned out LED.

First attempt at the fingers with wire wrapped around 3D printed insulators.

While the glove was curing, I got started on the base. I wanted something that I could access the batteries needed to power the hand along with hiding the associated wiring. I found a small jewelry box at Hobby Lobby which had a drawer in the bottom that I could use as a storage area for the battery pack. I spray painted the box with a hammered bronze paint from a rattle can. I drilled mounting holes in the box's lid from which I could use drywall screws to pin the hand to the box top. I also drilled a slightly larger hole in the lid to allow me to feed the hand's power line to the electronic mounted in the box.     To match the story, I used a white sock's ankle section on the wrist to resemble Trent's jacket cuff. Once I was happy with everything, I epoxy glued the lid shut thus sealing everything off.

This build was probably one of more complicated projects I have attempted and a bit disappointing since one of the five LEDs wouldn't work. Bummer. Anyway, I still had fun researching images for the project along with tracking down the parts needed to complete the display. 12/15/2022

VIDEO OF THE COMPLETED HAND ALONG WITH A SHORT CLIP FROM THE ACTUAL OUTER LIMITS EPISODE!