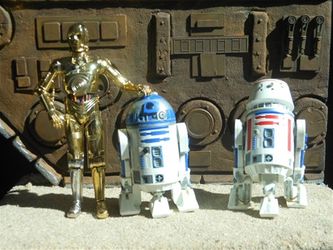 Perhaps the most iconic pair of robots in the world are the George Lucas creations, C3-PO and R2D2. Their companionship through all of the seven (currently at least) episodes of the Star Wars saga have warmed the hearts of millions the world over.

There are a number of kits out there based on these two metal heroes but I happened to choose the models offered by Bandai which they produced in 1/12 scale, and since I was going to pose the two characters together in a diorama, this was an easy decision to make. An added bonus was that the R2D2 kit also included a model of R5D4 which, if not for a “bad motivator”, the Star Wars story would have taken a very different turn indeed.

I had never built a kit by Bandai before and though I was a bit intimidated by the fact that the instructions were entirely in Japanese, the step by step drawings helped minimize some of my confusion. I have to say these kits are easily the most FLAWLESS kits I have ever made. No glue, I repeat, NO glue is needed for assembly nor is any painting required since every interlocking piece is cast in its authentic movie color. There are MANY parts since EACH R2/R5 driod leg has over 20 pieces!!! Providing that you carefully remove any traces of the sprue attachment points, the seams are literally invisible. There are several versions of each you can make displaying R2's hardware that makes him the Swiss Army knife of robots. C3-PO has fewer options and R5D4 is pretty straight forward, partly because his screen time was less than three minutes and we didn't get to know him that well.

All three kits are fully articulated which, proved to be something of a problem for me since I had decided to light all three figures. R2D2 & R5D4 didn't require that much chopping to install my LEDs but I was forced to run the power wires down inside the middle 'tripod' leg of each figure to the power supply under the diorama base. Each droid had four LEDs installed in the head, two of which are random flashers and others fixed.

As I said, C3-PO is FULLY articulated which allows him a remarkable range of poses and could possibly lend itself to stop motion animation possibilities after some minor adjustments. Unfortunately, this proved to be a real headache when trying to run the wiring that powered the LEDs I installed in his head for his 'eyes'. I had to carefully drill out the joints which were the primary attachment points for the neck, waist, knee & ankle joints. After a certain amount of cursing, I managed to run a wire down each of the legs, my thinking being that one wire needs less room to place and thus being less destructive to the figure as a whole.

Since I wanted to display all three of the driods in a setting together, I opted to recreate the scene when we see all three which is when they're being sold by the Jawas to Luke's Uncle Owen in “A New Hope”. I found a few movie stills showing the gigantic sandcrawler that the Jawas used for transportation and ended up carving what I hoped is a passable reproduction of part of this huge machine out of balsa foam. The huge gears and other dodads on its surface are soda bottle tops and assorted flat pieces of plastic and whatever I scrounged out of my scrap parts supply. After sealing the foam with a spray on acrylic, I hit it with a coat of gray primer from a rattle can and then used an assortment of brown craft paints and black washes to simulate the cruddiness of the huge machine.

The base is a simple 9” x 12” wooden plaque you can pick up at most craft stores. I raised it up a bit with wooden trim so I could hide the wiring and 9 volt battery power supply beneath. Once I figure out the placement of the driods and sandcrawler, I laid down a few layers of plaster cloth to roughen up the wood surface and then came back with a coating of real live Cape Cod beach sand to simulate the desert terrain of the planet Tantooine. The sand was affixed to the cured (e.g., hard AND dry) plaster cloth with a 50/50 mix of water and Elmer's glue and a splash of rubbing alcohol to act as a surfactant or wetting agent. If you don't add the alcohol solution FIRST, the sand will just bead up as you add the 50/50 glue solution and make a huge mess.

I have to say that I am very pleased with the way this diorama came out and even more pleased that I got a chance to build these two great fine kits by Bandai.

I photographed the diorama in direct sunlight to simulate the harsh desert conditions on Tantooine. Though this looks cool, the brightness of the scene unfortunately washed out the LEDS effects in all three driods. Still, even if you don't want to go to trouble of making a diorama as I did, these kits would look great in any collection. On the Geof Scale 0f 1 – 5, I give each of the C3-PO and R2D2 kits a solid A+.