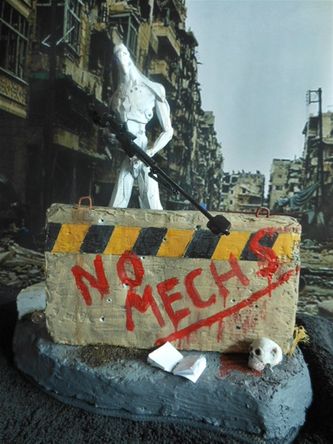 I've just added a new diorama to the 'Robot' section of the site you might enjoy. Similar to the theme of the “New Horizons” kit from Resin Realities is a very nice resin kit from Industria Mechanika called “Drone Sniper” designed & sculpted by Mike Jensen. This 1/8 scale figure stands 9” tall is is comprised of 15 well fitting pieces, one of which is the base.

The kit is made of a denser type of resin that I'm not that familiar but seems (to me at least) to render parts that are practically free of any seam lines. If I had a complaint it would be that the castings are generated from flat sprue design which can be a little difficult to determine where the part begins and the sprue ends. This particular kit didn't have this issue as I just described but some other Industria kits kits I'm currently working on are sorta confusing at times. Or, maybe I'm just dumb.

In any case, the parts fit extremely well and requires next to no prep work, a welcome change to be sure. The kit's base resembled a hexagonal tiled floor which was fine but I decided to spice it up a bit after seeing photos of what other modelers had done. And, inspired by a photograph of the completed kit, I also decided to light the head.

I initially was going to run a piece of fiber optic for each 'eye' (there are six of those bad boys) but the narrow features of the figure overall would have made this fairly difficult I felt. So, as an alternate approach, I ended up drilling out the eye holes along with the head's interior and AC'd a flickering blue LED into the void. The purpose of the flicker effect was to suggest that either the drone was actually thinking about its next move OR that it was defective in some way.

Anyway, the tricky part was drilling a hole large enough to run the LED wires down through the various sections of the body and have it emerge at the base from one of its feet. Fortunately, the way the kit was broken down into its various components made this a little easier than it sounds. I also used magnet wire which kept my drill hole size down to around a 1/16” or so. For power, I hid a three pack of 1.5 V wafer batteries in the base and used a magnetic reed switch to turn the drone eye lights on and off.

The rest of the diorama was a simple affair of various shapes of florist's green foam and odds and ends I cobbled together. One piece I cut to resemble an old beat up section of Jersey barrier and after giving it a coat of Liquitex (See Tip #22 in the 'Hints & Tips section of this site for a description of this product) and painted caution markings along the top section, a few bullet holes here and there along with a splash of protest graffiti in red. Weathered with a wash of India ink, water and rubbing alcohol gave it a nice grungy appearance.

I reinforced the bottom of the base with a piece of Masonite since the florist foam isn't really that durable. I installed the mounting pins for the drones feet in the Masonite and ran them up through the foam. I added a section of sidewalk and coated the entire base assembly with Liquitex, texturing it as needed, Finally, I added the stump of a street light (part of a mini flashlight actually), weeds (old paint brush bristles), dead leaves (tea), broken bottles, books and the obligatory human skull with a bullet hole in it to complete the scene..

This is a very nice kit which goes together very easily. It costs $99.00 US plus shipping and can be ordered directly from Industria Mechanika. Click here to get to the page: (https://industriamechanika.com/shop/1-8-scale/23-mike-jensen-s-drone-sniper.html) 4/18/17 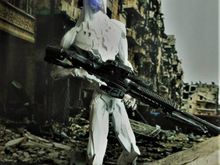 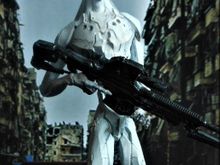 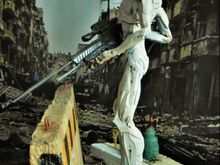 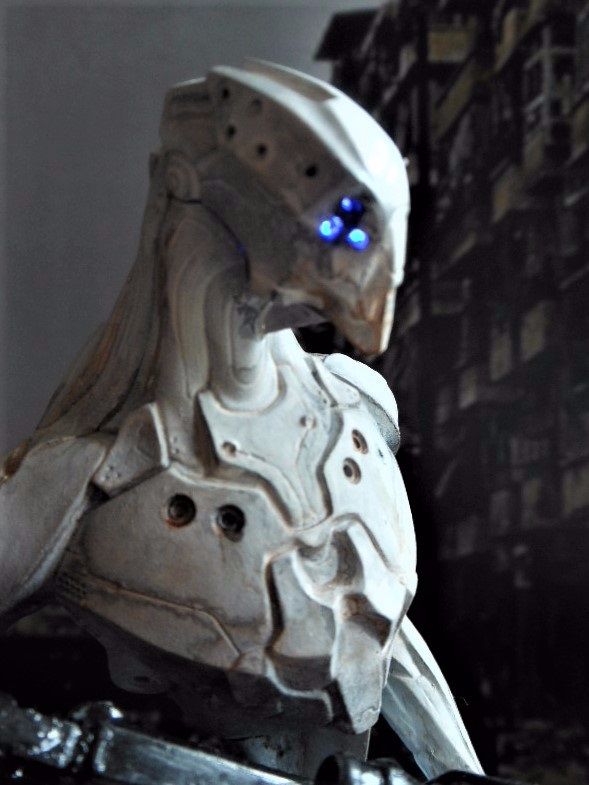 Close up of the head showing the flickering blue LED inside. I was going to go with fiber optics but running six fibers (one for each 'eye') was more complicated than I was willing to tackle for this kit.