The Mutant From Metaluna 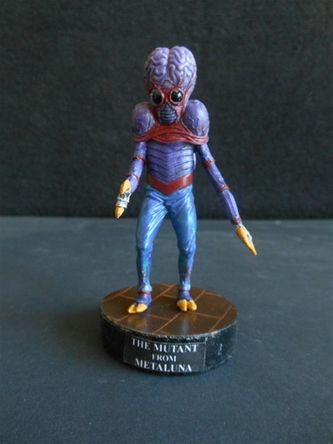 The film on which this kit is based, “This Island Earth”, has been described as the “Star Wars” of the 1950's. I wouldn't go that far but the technical effects and plot are well above the norm and are truly impressive. The plot and acting are plodding at best which is why I think the Mutant of Metaluna was thrown in to sorta prevent the theater audience from dozing off. At first blush, the creature is pretty neat in appearance but closer examination reveals how impracticable it is for heavy lifting or any other mundane chores the Metalunans can come up with. In the film, it just lumbers about (much like the Frankenstein monster) so getting away from it isn't too difficult unless you're in a confined situation which the heroine is, as it turns out. Still, the film is a visual treat and is worth seeing if you missed it. Click here to read a brief plot description: https://en.wikipedia.org/wiki/This_Island_Earth

This kit has a lot of nice detail which makes it something of a bear to paint if you don't have a steady hand. The kit has four parts: the resin body and base with a pair of pot metal arms. Very little clean up was needed with this kit which seems to be SOP for the Micro line. Again, I had to use Google as a source for my color palette which I wanted to match to the film as much as possible. Unfortunately, most of the prints of the film are washed out so I went a little brighter than what I was seeing. For the base, I hit my scrap pile and found a nice sheet of vinyl concrete block pattern from N Scale Architect. After gluing the sheet to the resin base, I hit with a couple coats of brass paint to simulate the metal flooring in the Metalunan spaceship. Once dry, I 'grouted' the seams with copper paint to give the scene a nice “other worldly' look.

1955 poster for the release of "This Island Earth" which is a pretty good movie title when you come right down to it.