Gort from "The Day The Earth Stood Still" 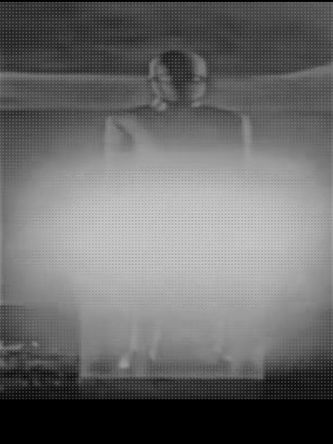 Here is another of the Micro Mania line of monster movie miniature creatures, the ominous robot, Gort, from “The Day The Earth Stood Still”.  The photo to the right is an actual screenshot from the film, a scene that I'm trying to copy with this kit.

As is the case with most of these kits, it is fairly simple (only four parts, one of which is the base), short (roughly 3 1/2” tall) and easy to assemble. The sculpt is by John Larson who has done a number of these kits and manages to capture the look of the robot pretty well with very little clean up required before assembly.

I like to add to these kits if I can to make them a little more interesting by changing the base a little or maybe adding an object for them to hold. In this case, I decided to copy the scene where Gort, upon learning that Klaatu (the alien emissary played by Micheal Renny) has been shot and killed, begins to melt his way out of the plastic 'prison' in which he's been encased.

It took me a while but I managed to find a clear plastic shell (a salt shaker as it turns out) in which to pour a clear resin to simulate the plastic 'prison' in the film. Once I poured the correct amount of resin into the shell, I immersed Gort into the liquid resin which ended up just about mid thigh on 'him'.

After the resin cured, I used an iridescent white as the base color and then came back with a flouresecent orange on the outer edges of the boiling plastic. I finally gave the whole surface a coat of clear yellow to copy what I thought the scene in color would look like as Gort burns or melts his way to freedom. I made the surface 'bubbling' by adding various sized beads onto the wet paint which I had applied as a very thick layer. Once the paint dried, I pried the beads loose and back filled the holes with more of the paint which resulted in a convincing burst bubble appearance.

When that application dried, I lightly coated the surface with clear Elmer's glue. After waiting a few minutes, the glue was just tacky enough to attach very small wispy pieces of cotton to resemble steam or evaporating plastic. To finish, I applied decals to the base to spell out Gort's name, sealed the decals with a clear gloss coat and the model was done.

I realize that this may seem like a lot of work for such a small kit but it was more of an experiment on making a fuming effect with as little financial risk as possible. Perhaps one day I'll buy a larger scale Gort resin kit (again) and try out this technique on a new scene. I'll keep you posted. 4/14/17 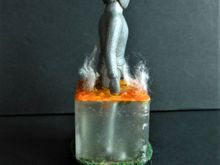 Right side view. Click once to get a larger image. 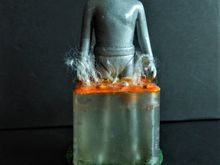 Front view. Click once to get a larger image. 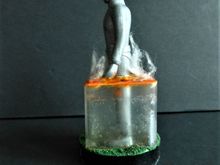 Left side view. Click once to get a larger image. 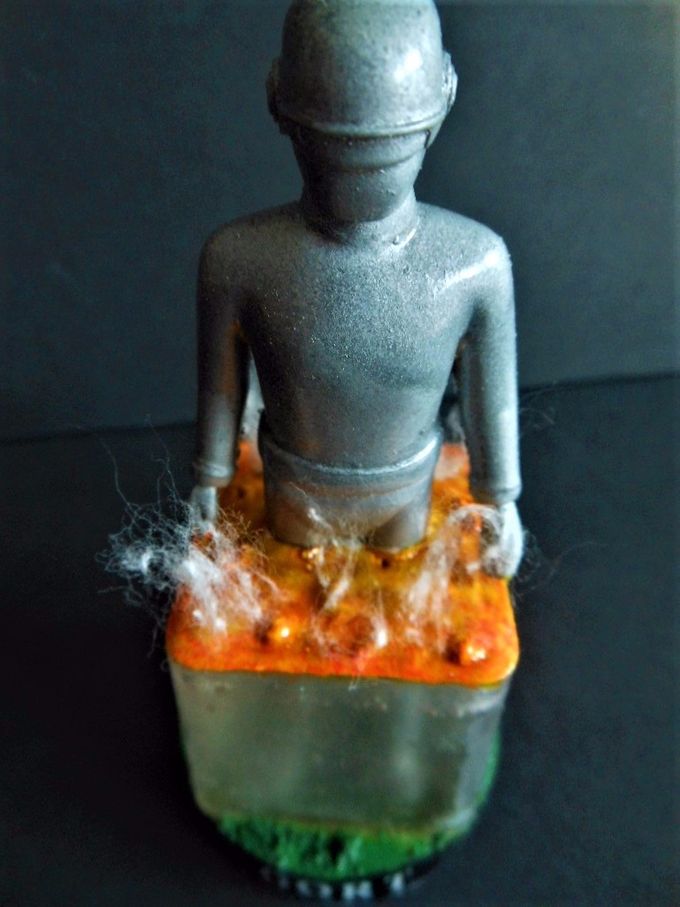 Here's a close up of the 'boiling plastic' scene I was trying to copy from the top photo. Unfortunately, the eerie glow as seen in the film isn't there at all but what are ya gonna do on a shoe string budget?

Very impressive. I do have a Gort question please contact me. Thanks