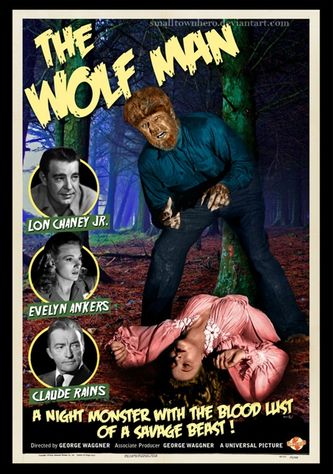 As I've stated elsewhere on this site, the Wolman is my favorite monster. I think the fact that he was just as much a victim as his, well, victims makes him so appealing to me, kind of a King Kong syndrome you might say. A poster of the film is at the right.

Anyway, this Wolfman kit is from Polar Lights and I'm sad to say it wasn't one of their better efforts. Based on the copyright info on the box, I'm guessing this kit was released in 1998 which was early in the company's history which may account for the average quality. Despite its 'age'; you can purchase this kit just about anywhere.

I also suspect that Polar Lights farm out a lot of their kits to other manufacturers which have varying levels of skill and quality control. Some of Polar Lights kits are absolutely fabulous (see my build of the 'Alien' Kane model) or their Robbie the Robot which also can be seen in the 'Robots' section of this site.

In any case, after significant filing to remove cast lines and filling seams on poorly fitting parts, I managed to make a pretty nice model. I dressed up the base a bit with a little Woodland Scenics turf and few scruffy strands of dead grass here and there which I made from paint brush bristles. I didn't come with a name plate though I may end up making my own from downloaded copies of the film's poster. It is a tad shorter that the Aurora Wolfman kit of the 1960's (see comparison photo below) and the stance resembles the Aurora kit as most of the Wolfman kits out there do today though the dead tree is a nice touch.

Included in the box was a flier advertising a larger resin version (¼ scale – 18” tall (!!!)) of this kit sculpted by Randy Bowen. Supposedly limited to 60 casting days, I have NO idea how many kits that produces but probably not many. Again, the flier was issued in 1998 so the chances of picking one of these kits may be difficult unless it pops up on eBay one day (which has been known to happen). The 1998 price was $189.00 plus $10.00 for shipping so if you do find one, I suspect the price would be significantly more. 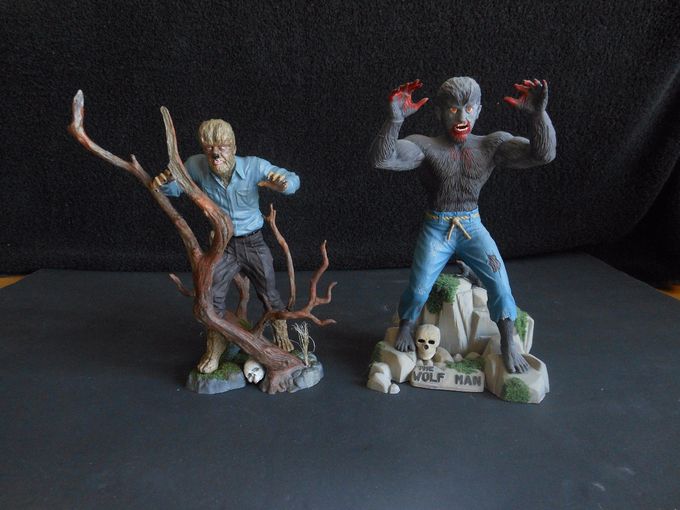