Bela Lugosi on Broadway as 'Dracula' 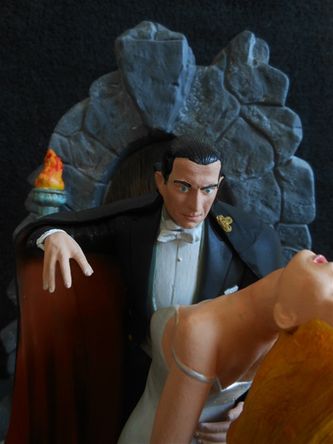 Here is a recently completed plastic kit from Moebius Models of the Universal Picture classic “Dracula” as portrayed by Bella Lugosi. The kit supposedly represents Lugosi in the role when he first appeared on Broadway in 1927, although the 1931 film is what all of us are most familiar.

Despite being considered the archetype of the infamous vampire, Lugosi only performed the role twice (!!!) in his long film career, the first being “Dracula” in 1931 and his last portrayal in “Abbott & Costello Meet Frankenstein” in 1948. I really disliked that film when I first saw it (I think I was twelve or so) because it made 'fun' off my beloved monsters but considering the multitude of horrors the world had seen in the recent world war, I suppose 'my' monsters were pretty laughable all things considered. I should mention that I have come to enjoy “Abbot & Costello Meet Frankenstein” quite a bit since my prejudiced youth and I have added it to my DVD collection.

Anyway, this kit is a bit more complicated than your 'average' plastic kit as indicated by the recommended age group of 15 to adult. Construction is pretty straightforward although cleaning up the seam lines was aggravating since their locations weren't well placed or thought out in my view. For example, the victim's arms attachment points are just below the shoulders. Why the designers didn't make the seams at the dress straps instead of an 1/8 inch farther down the arm is a mystery. Leg, arm and dress seams were also pretty obvious so if care isn't taken to fill with putty and smooth out well, the kit just won't look very good. I think this may partly explain the 15 years or older recommendation.

Still, the kit has a nicely detailed stone floor base and imposing wooden door background along with the requisite skull, bat and rat. I was thinking of lighting the torch with flickering LEDs by recasting the flame in clear plastic but decided against it although it probably would have looked cool if I had. I may end up doing it at a later date. I'll keep you posted. At any rate, only real addition to the base that I made was to place tea (yes, real tea from a tea bag) here and there to resemble dried leaves that tend to collect in crevasses and corners. I used Elmer's glue for the adhesive.

The painting instructions were pretty broad brush (pardon the pun) so you can do just about anything you choose. The model cover art provides a pretty generic paint scheme though I elected to use an iridescent pearl white for the victim's gown to give it a silk or satin look. Her hair was base coated with a yellow from a rattle can and then dry brushed with clear orange to add highlights. I also tried out my real make up concept on the victim to give her more life like flesh tones. I discuss this process in more detail in my 'Helpful Hints & Tips' section elsewhere on the site.

In a way, I suppose this kit is a companion piece with Moebius' Models other classic horror kits based on “The Bride Of Frankenstein” & "The Creature From The Black Lagoon".  Each has a guy and gal in it (sorta) and the scale is the same so they would look nice displayed on the same shelf with one another. All in all, this kit is pretty good once you get by the seam issue so, on the Geof Scale of 1 - 5, I give Moebius Models “Dracula” a B -. SOLD! 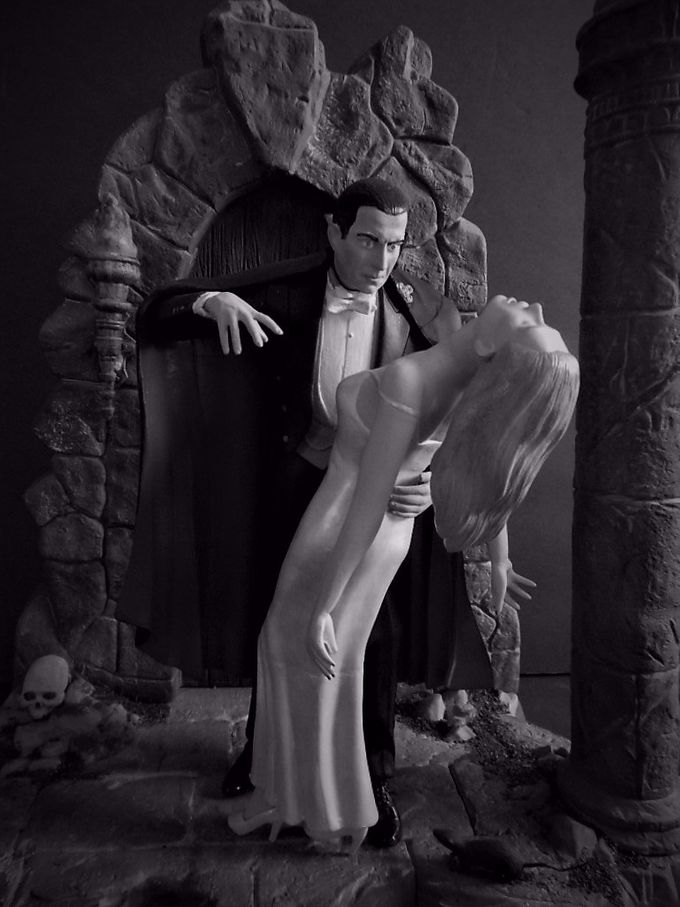