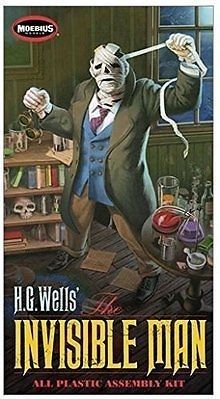 The 'box art' for this very nice kit.

Here is another very nice plastic kit from Moebius Models collection (now owned by Pegasus Hobbies) featuring another of the classic Universal monster films of the 30's and 40's. This time out it is 'The Invisible Man' (1933) starring Claude Rains as the crazed Dr. Jack Griffith who, as it turns out, we never really see until the last few moments of the film

Although I have never considered the Invisible Man as 'monster' per se along with the story being hindered by a ponderous plot, one still has to be impressed with the technical achievement that is probably the best telling of H.G. Wells' 1897 novel which, to be fair, is also pretty ponderous itself.

In any case, this kit is loaded with tons of back ground 'stuff' that easily worth the price of the kit with dozens of books, glass works, furniture and the like. I'd by the kit again just for the stuff!.

The kit goes together well with very little prep work which is typical of the Moebius brand so even the beginner can end up with a very nice display piece. The instructions are a little clunky but the many illustrations along with helpful suggestions for painting add a lot to the model.

I added a few miscellaneous items like a real glass bottle full of mouse bones (honest), another with baking powder and a display sign I had a friend make up for me on a piece of Plexi-glas into which he laser etched “The Invisible Man”. I managed to lose the make-up nose that came with the kit so I fashioned another out of a spare T- Rex tooth I had kicking around.

One thing I should mention is that there is available online from an outfit called TSDS (http://www.tsdsinc.com/index_files/INVISIBLEMAN.htm) is a nice but pricey (in my view) decal set specifically designed for this kit. With it you get book details, various labels for the lab equipment and the like. My only caution about these decals is that they are printed on CLEAR stock which makes them disappear into the surface on which they are applied UNLESS you lay down a white or gray painted subsurface first to fully appreciate them. This means, for example, that EVERY label you want to apply to a piece of glassware must have painted 'label' pre-applied by you to the piece before the decal is laid down. To be fair, the manufacturer mentions this in the decal instructions but I wish he had just printed the whole sheet on white stock and saved old shaky hands here a lot of trouble and aggravation but that's just me.

Still, I think this the BEST of Moebius Models Classic Universal Monster series in terms of what you get for your money. I'm only wondering is what's the freakin' hold up is on the Moebius 'The Wolf Man' kit? 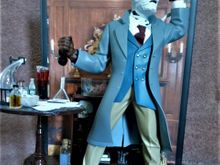 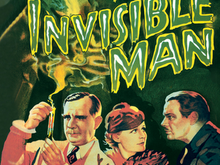 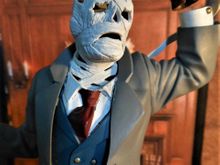 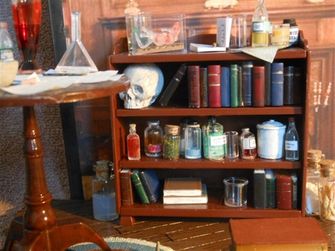 Detail shot of the bookcase. Notice all the kewl STUFF you get with this kit!. Click once for a larger image. 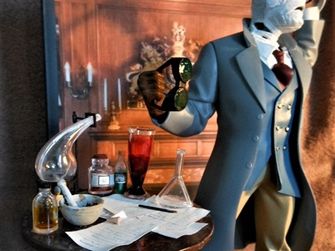 Another detail shot showing the side table. Click once for a larger version. 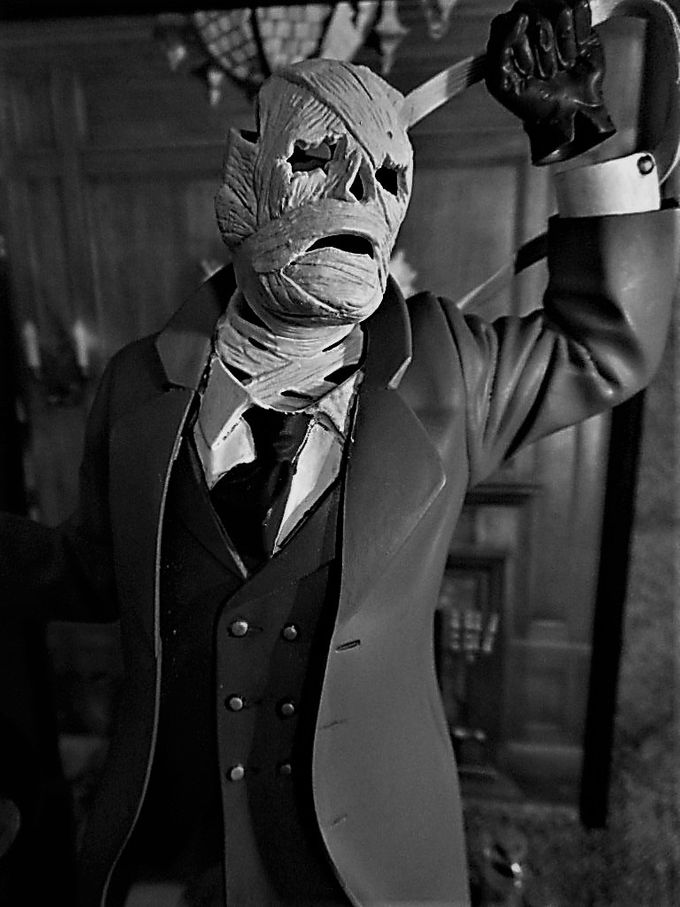 As I often due with films that were originally shot in black and white, I'll include a black & white version of the kit, courtesy of my photo editor. Notice how the left hand is 'detached' from the fore arm, a very clever effect in modeling.