King Kong versus the Tyrannosaurus Rex 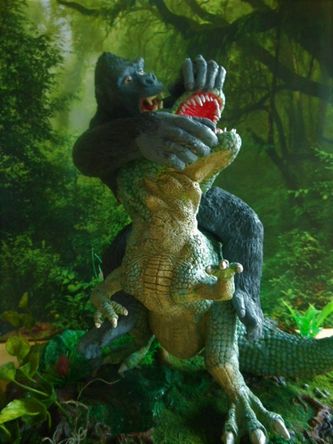 Here is a recent build (3/2017) of an average kit from Resin From The Grave. It took me forever to get my hands on this kit, over eight months in fact. The company is going through some hard times, mostly medical in nature, which was the main reason for the delay. Their web page site has since been pulled from the Internet but I'm told they may be back in business at some undetermined time in the future.

The kit was sculpted by Joe Laudati who has the ability to inject lots of 'action' into many of his scenes, a number of which are on display in the pages of this site. This scene is undoubtedly the best from the 1933 classic as Kong defends his new love from the ravenous jaws of the Tyrannosaurus Rex.

Alas, the quality of the kit is fair at best. A number of the pieces had large voids (Kong's lower jaw was just a paper thin shell) and some parts were missing, namely the Ann Darrow figure and one of the T-Rex's foot spurs. The teeth in both figures were either half formed or nonexistent, so I ended up literally rolling my own and inserting them into the monster's jaws after I filed out the partial dentures.

Both animals needed a lot of filling & filing to clean up seam lines and injection points, a process that took me at least 24 hours. I think if I saved all the resin that I filed off, I'd have enough material to make another kit...well, almost.

I happened to have another Fay Wray figure from another kit that was roughly the same scale so I made a cast of her along with a duplicate spur to replace the missing T-Rex piece.

Assembly was fairly straightforward although Kong was a little tricky since you had to carefully figure out Kong's arm and hand placement so it merged with the open jaws of the T-Rex. I ended up pinning but not gluing the arms to Kong and marking them with a pencil when I was happy with their orientation. I then glued the LEFT arm to Kong with a 5 minute epoxy (my go to adhesive) and test fit it to the T-Rex mouth to make sure everything lined up. Once the epoxy set, I used the same process with his right arm. Ideally you should be able to remove Kong from the back of the T-Rex for painting of each figure.

Once I finished with making and inserting Kong's teeth, I painted the hair on his body with a semi-gloss very dark gray, almost black. Where his skin was exposed, I went with a slightly lighter gray color. As I have done in the past with my other kits, I used 5 mm glass eyes by drilling out the cast eyes in Kong's face and gluing them in place with AC.

The T-Rex was a bit more complicated to paint partially due to the different skin textures Joe Laudati had carved into the original. I gave it an initial base coat of light green with a brush (I don't use an air brush) making sure to get paint into every nook and cranny. I used a yellow ochre for the gullet, belly and limb 'armor' followed by a light wash of dark brown to bring out the detail. The rest of the body I dry brushed with olive drab and then a wash coat of medium green which I applied here and there until I got the “look” I wanted. I then gave the T-Rex a semi-gloss coating of clear, partly to give him a little sheen and partly to protect the paint on his back where Kong will be resting.

I've been building resin kits for a few years now but I have to say, the base for this kit was probably the most complicated I have ever encountered. Plants of all kinds, stumps, roots, rocks and pebbles abound along with a stand alone tree trunk under which Fay would be laying as seen in the film. I decided to super detail the base even more that it was by adding plants of my own creation along with some aquarium plants, ground foam for bushes and moss effects. I think I spent as much time on this part of the kit as I did on any other, maybe more.

Though the kit quality leaves something to be desired, I think you can end up with a really nice scene if you are patient and willing to spend a lot of time in pre-assembly prep and careful painting. 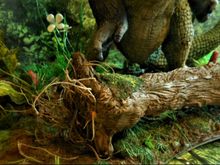 Left side of the base 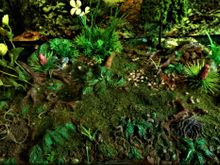 Aerial shot of the entire base 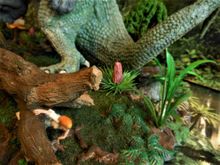 Ann Darrow struggling to get out from beneath the tree. 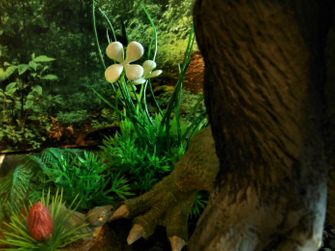 Another shot of the left side of the base. 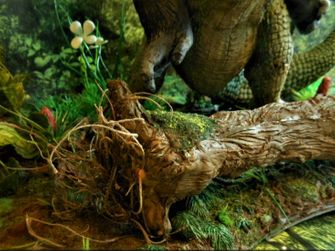 The tree that was knocked over during the titanic struggle, trapping Ann beneath at the other end. Note roots and other stuff. 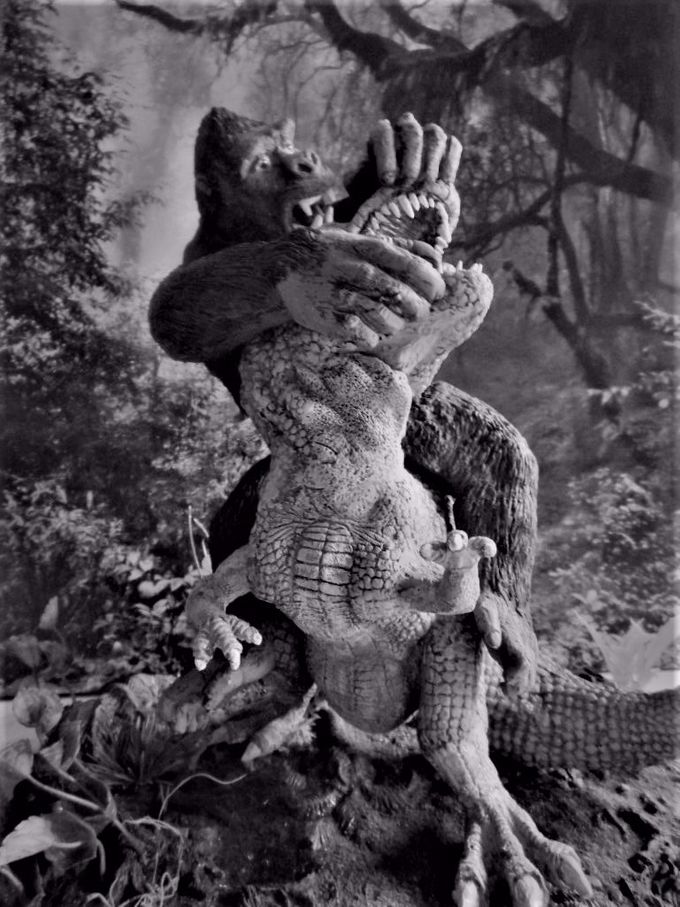 As I have done in the past for films that had originally been filmed in beautiful black and white, I used one of the filters from my photo editor to do just that with this Kong diorama. I think it looks pretty cool.

This has to be one the top ten fight scenes in the history of cinema. Click on the arrow to watch it and see if you don't agree.