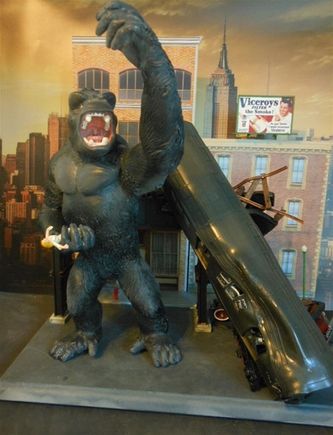 SOLD! - Here my latest creation based on a scene from the iconic 1933 stop motion film classic, “King Kong”. It takes place near the conclusion of the film when Kong has just escaped the theater where he had been put on display for all of New York to gape at in wonder. After successfully recapturing Ann Darrow, he soon comes across a subway train which, to him, probably seemed like many of the dinosaurs he had been protecting her from while on his island. With Ann in one hand, he pummeled the subway car, terrorizing and crushing its luckless occupants before dragging it to the pavement below.

Hopefully, my efforts captured some of the excitement of that scene. I incorporated elements of earlier scenes such as the smashed convertible and the man running for his life along with the torn up track and crushed subway car.

I used a 16” x 12” wooden plaque as the base which is my usual choice due to its durability and convenient size. These and other sizes like it can be found at AC Moore or other craft stores.

I made the two building 'flats' by using a handy little program called “Model Builder” from Evan Designs. Primarily used to construct inexpensive buildings for model railroads, you can chose just about any size or scale you wish and, by cutting and pasting, you can have buildings of all sizes and construction materials from the supplied templates. You can also import your own photographs of doors, windows or any detail you might desire. It costs $45.00 but considering what you would pay for a plastic kit of comparable size, you're still way ahead of the game. Here is the link to that site check it out (http://www.modeltrainsoftware.com/modeling-software.html).

After I designed my building flats, I printed them out on full page label paper and trimmed as needed before applying them to a Masonite backing board. To prevent bowing, I reinforced the back of the panels with short sections of 1” x 1/2” bead stock that you can pick up at Home Depot or other lumber sources. When I installed the flats, I used finishing nails spaced in such a way that I could interchange their positions if I wanted. 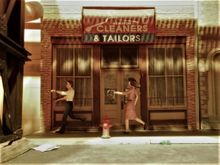 Left side detail shot of the base showing the man & woman figures. If you look closely, you can see a Coke bottle I made out a piece of clear plastic sprue. Click once to enlarge. 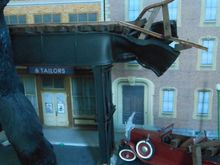 Detail shot of center section of the base. Click once to enlarge 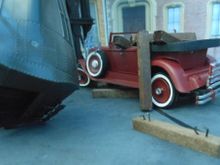 Left side detail shot showing wrecked car and debris. Click once to enlarge. 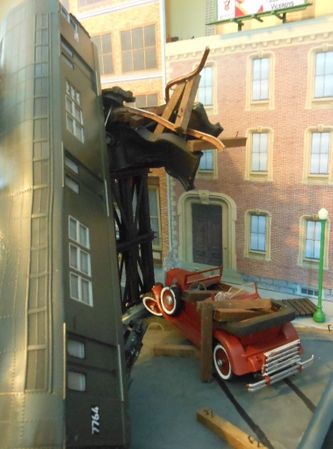 Another detail shot of the right side of the scene. The auto and subway car are movable so I can position them for different camera angles.

The trestle is made from a Lionel O gauge kit of a railroad bridge (Kit # 841K) which I found on eBay. After I assembled the kit, I used a heat gun to soften and distort the plastic 'steel' girders and side panels until I got close to the look I was trying to achieve. After some flat black washes to dirty it up and rust streaks here and there to age the structure, it was ready for the track

I purchased some solid O gauge rail stock for the subway track online and made the ties from 1/4” square sections of balsa wood strips . The track is hand laid and held in place with scale rail spikes which I also picked up on eBay. Because the solid track was pretty sturdy, I had to bend each length of rail beforehand to simulate Kong's wrath. Once I got the level of destruction I was happy with, I hand spiked the rails to the ties and then attached the final assembly to the bridge.

Next, I got my hands on an old Lindberg model (Kit # 6009:100) of a 1930 Packard convertible from eBay (where else?) that resembles a car that crashes early on in the scene. This is the part that is crazy. I tend to make the model as good as I can knowing full well I'm going to trash it later on down the line. This kit was no exception. After it was complete, I let it sit for about a day to make sure the glue had set and then, like the girder bridge, I attacked it with my trusty heat gun. I distorted most of the driver's front side to model the damage the car would have suffered if it had run into the bridge support. I painted up some wisps of steel wool with white paint to copy steam coming out of the radiator and randomly spread some gloss clear paint on the road beneath to suggest water pouring from a split radiator.

The subway car is an O gauge car from an MTH flat car load. It was a little expensive but I resold the flat car and made a little over half my initial cost back on that sale. As in the case of the other plastic objects in the diorama, I used the heat gun to soften and distort the car's roof and side walls to copy the pummeling the car took in the film. I secured the subway truck's positions in place with an epoxy putty so, once cured, they would be locked them in place. The subway car just rests against the bridge and the diorama base. 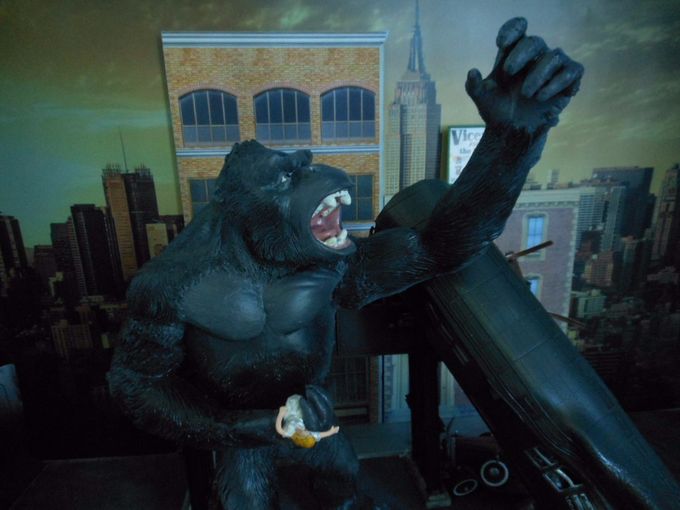 Because he can rotate a bit, I posed the Kong model in such a way that it is easier to see his defiant stance with his fist raised and the Empire State Building looming in the background.

Finally, a word or two about the model Kong. I got this vinyl kit on eBay for around twenty bucks as I recall. It is an import but to the best of my knowledge it is NOT a knock off. The Ann Darrow figure was cast into his hand which really didn't look that great so I cut her free and re-sculpted her a little bit. I positioned his left arm in an upward gesture to suggest Kong's defiance and used my heat gun to soften his fingers to give the hand a more fist like appearance. Painting was pretty typical with very dark grays for his fur and a bit lighter for his skin. As I have done in the past, I used 3mm clear glass doll eyes that I back painted with a medium brown paint for the iris' color.

For mini-details, I found a G scale man & woman figure which, after I chopped them up a bit, made them look like they were running for their lives. I had to make my own street light and I added some trash in the gutter, namely some newspaper, trash and even a Coke bottle. The bill board on the top of the short flat was a refrigerator magnet that I framed in scrap wood and painted dark green for the frame. Though the advertisement isn't chronologically correct (filtered cigarettes didn't come out in the main stream until 1952), I think the ad is kinda goofy. In the detail photo of the man running, you may see a bottle of Coke in the gutter. I made that with a clear piece of plastic sprue that I carved into the correct shape and then painted with clear green paint.

The background is a skyline shot of New York I found on Google that I had made as a banner from Vistaprint, an outfit I've used quite often for that purpose.

Well, there you have it. This diorama took me a bit longer than some of my others since I kept going back and forth on the layout and trying to determine the scene's elements. One problem that may not be evident is that of scale. I had to mix various 'sizes' of kits. Kong was technically 1/48 scale but the Ann Darrow figure was I/35 scale. The subway car is O gauge or 1/48 scale. If I had used an 1/35 scale subway car, Kong would have been dwarfed by it yet the Lindburg kit was of a 1/32 scale automobile and seems right for the scene. In any case, I think it came out pretty well and as far as I know, this particular scene has never been constructed before. If any of you know of someone else that has modeled this scene, please let me know. I'd love to see what they did with it. 7/10/17 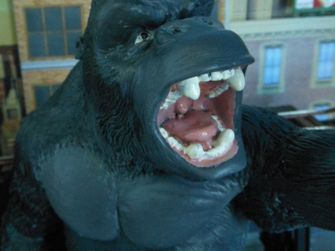 Medium shot of the head. For a vinyl kit, it had pretty good detail. 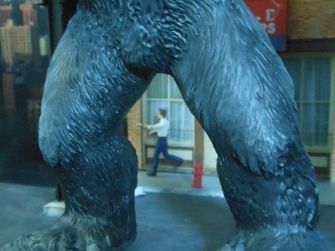 Looking between Kong's legs at a guy running for his life. 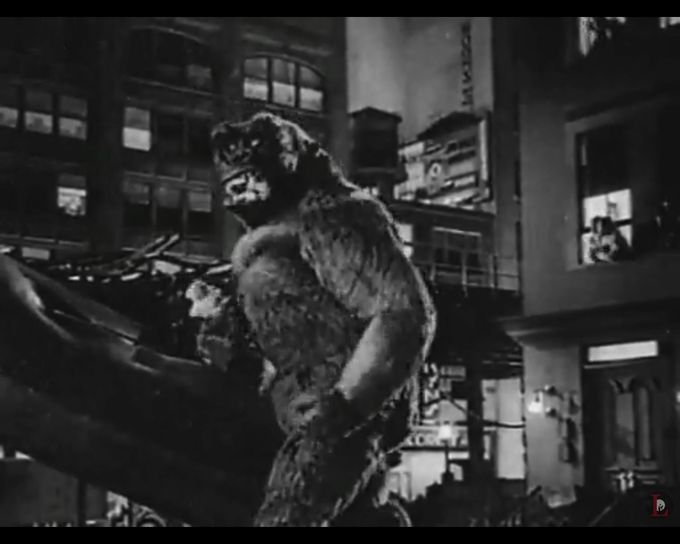 A screenshot from the original film of the scene that I attempted to capture in my diorama. 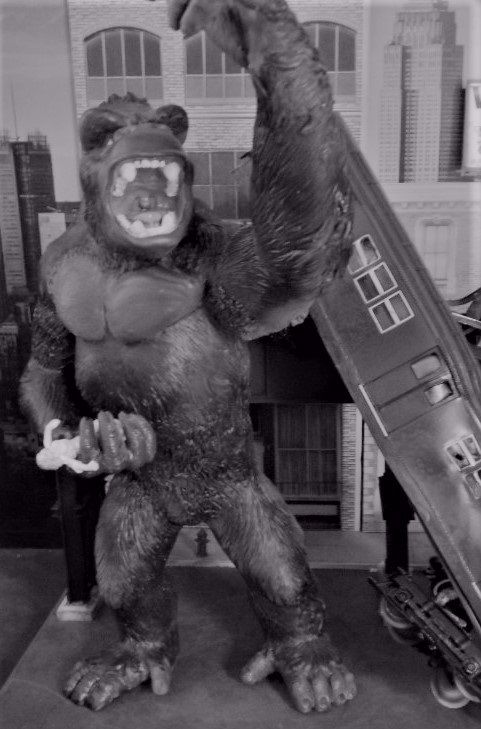 As I have done in the past, I used a photo editor to show my diorama in black & white to emulate the 1933 film classic.

I found this page while researching sources for my own Kong diorama, and am totally impressed! In the 1933 film, Kong's scale changes from scene to scene anyway. Artistically, you nailed it!

Thank you, Don. I'm currently working on the King Kong "log roll" scene sculpted by Joe Laudati. I hope to have it posted by the end of this week.