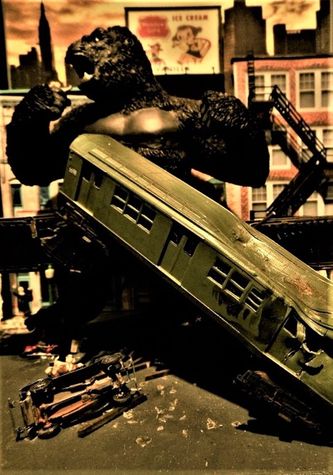 Yet another go at the scene in the 1933 classic 'King Kong' where the titular character is venting his rage on a subway car and its hapless occupants. This time around, I decided to go with a little smaller scale, roughly a cross between 1/87 (HO scale) and 1/72.

I got the Kong figure from from the 1/72 scale Polar Lights kit which has Kong standing triumphantly over the slain T-Rex. This kit is a pretty simple affair with only 5 parts or so counting the base. The casting is very detailed and extremely clean without any seam lines and/or bubbles. The downside (for my purposes at least) is that Kong's feet are cast into the T-Rex which forced me to make castings of them. This proved to be difficult due to their orientation on the T-Rex corpse. I managed to make an acceptable pair by making molds using something called Composi-Mold (see my review of this product in Tip #32 in the Hints section) . After the molding compound set which I accelerated by putting the whole mess in my freezer, I made castings with 5 minute two part epoxy. A little carving and filing later, my new Kong feet were ready to attach to the main figure. His right foot had a pronounced arch which was hard to hide so I decided that he could be stomping on a 1930's automobile to provide a reason for the arch. I used a 1/100 scale female figure (see text) I had for the Ann Darrow character. She is a tad too small but not too objectionable for the most part.

As luck would have it, I managed to find an HO scale subway to match up with my Kong. As I had done with the subway car in 'The Unexpected Stop' (which can be seen elsewhere on this site in the King Kong area), I heated up the plastic shell with a heat gun so I could easily distort the car's body to look as if it had been pummeled by the giant ape. I used two part epoxy to position & fix the car's trucks in place and chopped up some clear plastic 'bubble' from a toothbrush pack to simulate broken glass on the pavement below and in some of the subway car's windows. As a finishing touch to the car (and a last minute change to be honest), I decided to light its interior. I used a flickering blue LED in the front end of the car to suggest something electrically wrong going on inside and a regular white LED to the less damaged rear section. The power supply (three 1.5 volt batteries) and circuitry are all self contained within the car's shell and I hid the micro on/off slide switch on the back side of the car which is easily accessible for operation.

The wrecked elevated track was made from two HO scale Micro-Engineering open truss bridges and the supports were from some N gauge Micro-Engineering elevated track supports I had kicking around (never throw ANYTHING away!). I sandwiched a pair of supports together for each of the truss sections (four for each side) to give them a bit more heft and visual 'balance' to match the larger scale of the scenes various elements.

To add further detail to the scene, I purchased a number of metal & resin automobile kits that were chronologically correct for the scene.. The metal kits (from The Wheel Works) were very detailed so I put them in the foreground whereas the resin kits were less detailed (and cheaper) so so I kept them in the background. I partially flattened one of the metal kits for two reasons. One, it looks really neat and was easier to do to than smashing a solid resin car. And two, I needed something to put under Kong's right foot to account for its odd cupped appearance, a result of the cast I had pulled from the Polar Light Kong kit I described earlier.

Probably the toughest part of the whole build was the running people. I managed to find a mess of supposedly 1/100 scale sports figures from some outfit in China. Note that the Ann Darrow figure in Kong's grasp came from this set. In reality, they are a bit too large for 1/87 scale (HO scale) items I have them staged with but no too objectionable (to me anyway). Anyway, I chose sports figures because they all in some state of motion which fit the action of the scene. For almost all of them, I cut off legs and arms and re positioned them to suggest vigorous flight from the hairy beast and the mayhem it is causing. I cut the legs off one of the men and positioned him in the overturned foreground car to look as though he is crawling out to safety.

The street scene backdrop was created using a product I've mentioned in the past, 'Model Builder' software from Evan Designs (see Tip # 32 in the Hints section for the write up). After I printed out my flats on full page label paper, I attached them to foam board which I then backed with Masonite to give it more strength. I went with three structures this time and added a Walther's HO scale fire escape. The billboard is actually a refrigerator magnet I framed with wood & stuff to keep with that 1930's look. The billboard lights are actually small brass nails I bent to make them look like flood lights. I also made added a ruptured fire hydrant (rear left side of the diorama) with a fountain of water erupting into sky with a horrified woman looking on. The 'fountain' effect was just some Liquitex molding paste applied to a clear piece of plastic sprue about three inches long or so.

The background is an image that I grabbed from Google. I printed it out on full sheet label paper and after a coat of UV protection spray, I stuck it to a piece of foam board I framed it with some Plastruct vinyl channel stock to give it a nice finished look. The base is just a regular 12” x 9” wood plaque you can get at any crafts store for a reasonable price IF you use the weekly coupons. I like using these as bases for my dioramas because they're cheap (with a coupon), sturdy and the various sizes just about fit any of my applications.

I really enjoyed making this build. There is a slide show below showing a number of detail shots of the diorama you may find interesting. This build is probably one of my more detailed build ups and took me quite a while to construct, perhaps a six weeks or so although some of that time was spent waiting for parts to come from far off places, not unlike Kong.  12/22/17 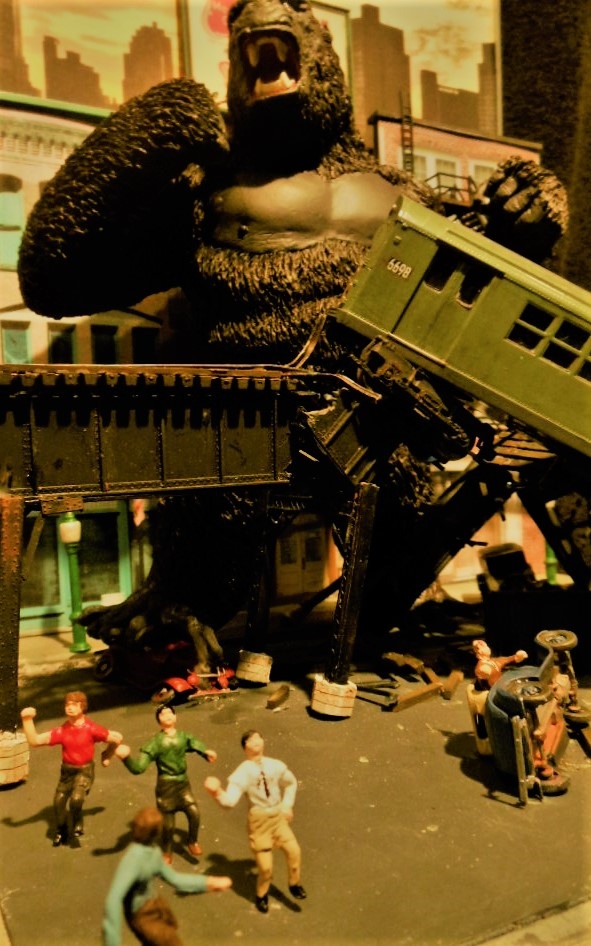 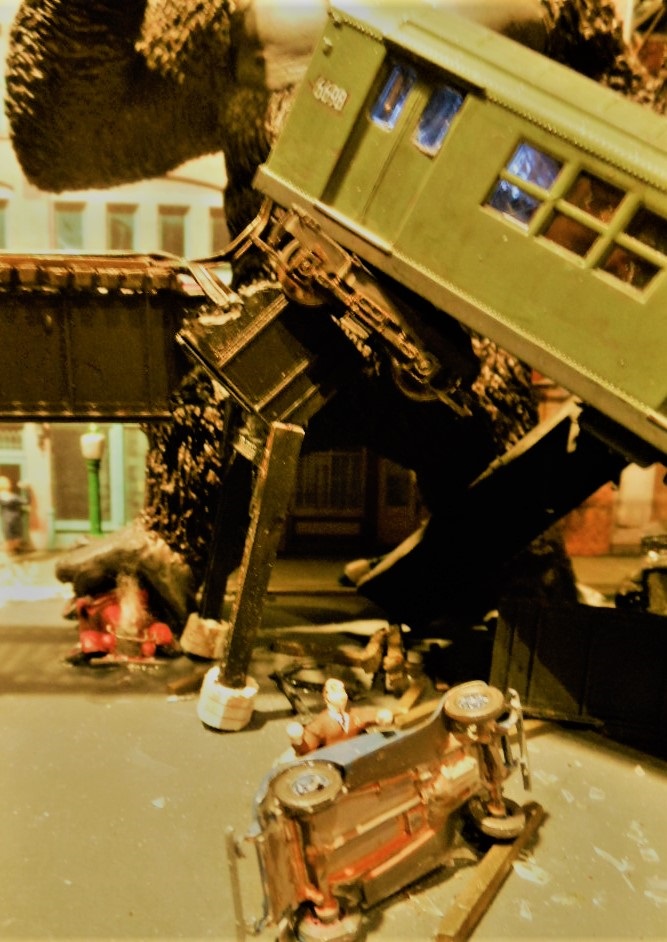 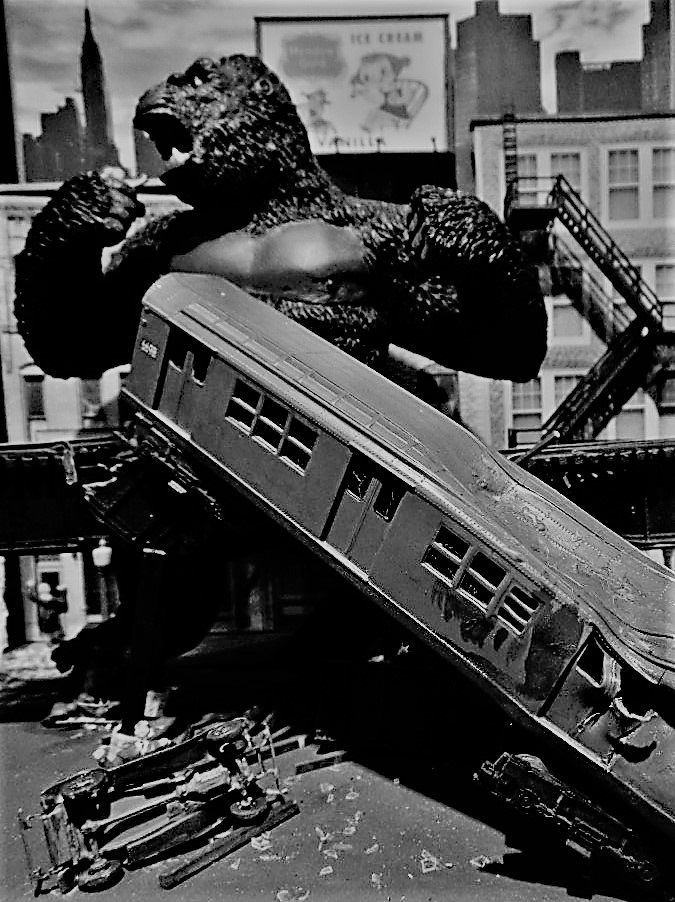 As I have done in the past, I made a black and white version of the scene with a photo editor to replicate the look of the 1933 classic.