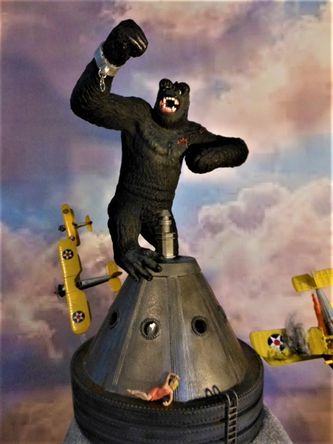 Here's a nice kit from Resin In Motion designed & sculpted by Mike Maddi based on the conclusion of one of the most influential films of all time, “King Kong”. I particularity liked the way Mike staged the three biplanes in the scene as they torment Kong.

Unfortunately, I wasn't that taken with the casting of the planes which had a lot of flash and looked kinda clunky in my opinion. I ended up raiding my spare model kits stash and found two biplanes that I had won in a raffle several years ago. One was 1/72 scale and the other was 1/48 scale which matched the resin versions pretty well. I ended up keeping the smaller of the three castings that came with the kit since it was in the background so detail wasn't an issue. I built the two kits per their instructions and wrecked the larger of the three to model what occurred in the film after the enraged Kong got his hands on it.

The wrecked plane's flames were made from short bursts of insulating foam onto a flat surface coated with silicone spray to prevent it from sticking. This takes a little practice but if you very gently press the trigger on the can WITHOUT the straw extension, you can tease out pieces that are just an inch in length if need be. In this application, I went with three to four inches and then layer spray painted them clear yellow & red and flat black for an oily smoke appearance. When you're done, be sure to clean the can's nozzle & inner tube with acetone so it doesn't get plugged. 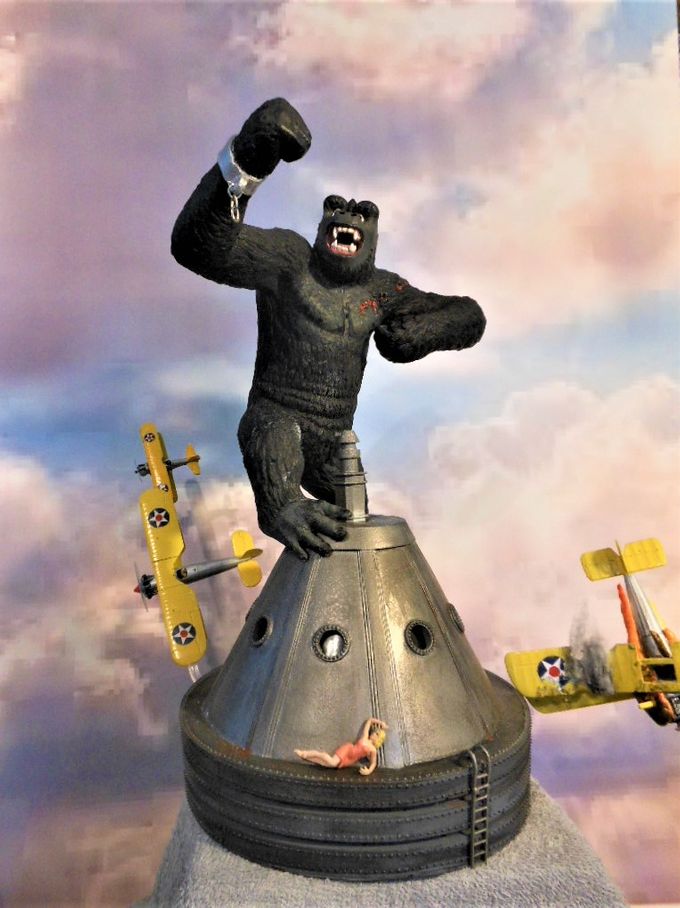 I should mention that Mike thoughtfully included the biplane markings (stickers actually) in color and black and white should one decide to paint up the scene in black and white to emulate the film. If done correctly, the “black & white” effect can really provide an unusual and interesting color palette variation. I've only attempted it once about a year ago with a kit based on “Twenty Million Miles To Earth” which has a similar story line to Kong when you think about it. This link will take you to that model to see the black & white painting effect: https://www.oneeffgeof.com/426554015

Anyway, Kong had only four parts, two of which were his upper & lower jaw, his left arm and rest of the body. These casts were nice and clean and only required minimal clean up before assembly. Since the designer kept the jaw sections separate, painting them before placing them in Kong's mouth made sense and made it much easier. I painted Kong's fur flat black from a rattle can and used a very dark gray for the skin. I happened to have a short length of chain from an old key chain that I inserted into the shackle on his right wrist. His eyes are 3mm glass eyes used dolls that I back coated a medium brown. 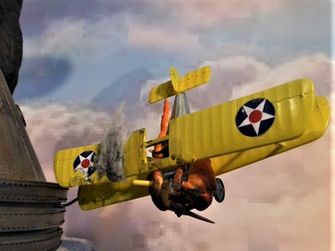 The one that didn't get away. Click for a larger image.. 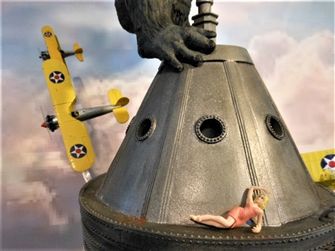 Detail shot of the base. The small plane in the far background is attached to the under wing of the larger biplane. Mike Maddi's clever idea of forced perspective really makes the scene. Click for a larger image.

The conical tower was next. The bottom was very uneven so I had to grind it down with a sand paper drum on my Dremel tool and finished it off with a flat sanding block to get it to lay flat. I drilled out the port holes on the cone and applied pieces of clear acetate on the inside to act as windows. You really don't notice it unless you're looking for it but I think it adds a lot of realism to the scene with little effort.

I used Rub n' Buff pewter on the entire surface after I primed it with flat black. I then came back with a solvent wash of black to get a streaky, weathered appearance which I accented here and there with rust running down the surface in random locations.

I ended up using a 3D printed ladder I had in my stash since I wasn't that happy with ladder supplied in the kit. I also replaced the Ann Darrow figure with a somewhat smaller one in my people stash (where else?) to match the scale of the burning bi-plane that was staged nearby.

So there you have it. This is a nice kit that couldn't have been simpler in terms of its construction and painting. Though I substituted a few of the components due to my own tastes, I think you can still have a very nice display piece using what is provided. 8/2/20 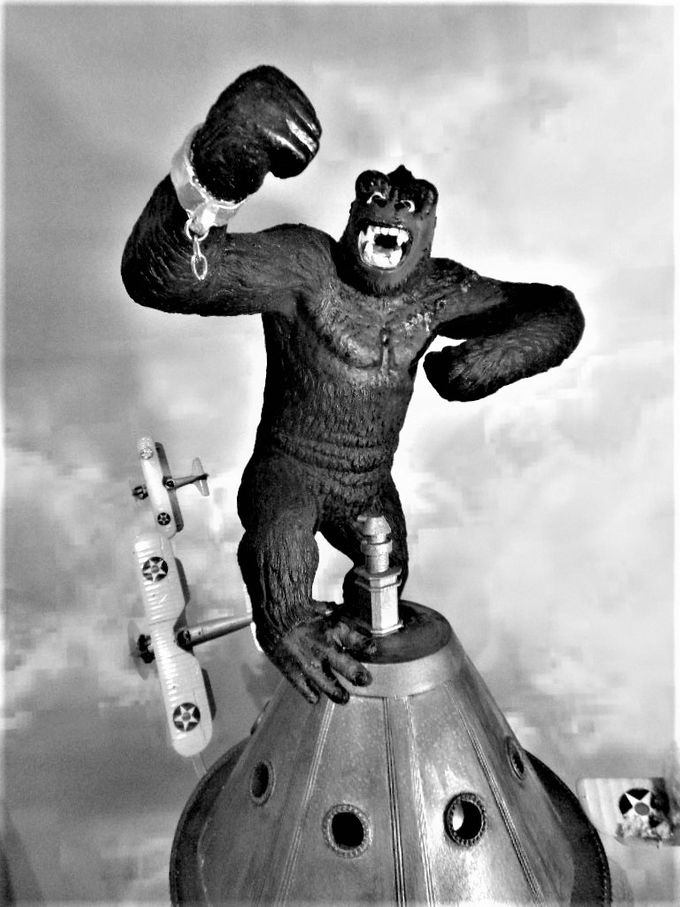 A black & white version of the kit courtesy of my Windows photo editor to match the 1933 film classic.