Battle of the Kings - An Alternate Images Resin Kit 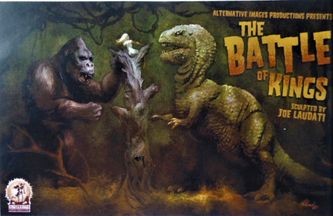 Box art for this kit.

A recent build of one of my favorite movie monsters, King Kong. This time out it is a resin kit put out by Alternate Realities Productions sculpted by Joe Laudati. The kit can be purchased as a whole (as seen here) or as a set with Kong as one half and the T-Rex on the other. Why anyone would want to purchase one and not the other is beyond me, monetary considerations aside. The setting is a similar one (also sculpted by Joe Laudati) from the now out of business Resin From Grave with the two titans duking it out over the fair Ann Darrow. I have to admit, I was a bit disappointed with the kit's lackluster “look” having been a HUGE fan of Joe's as attested to the number of my kits in my collection that he's sculpted. I may be wrong here but this probably the sixth or seventh sculpt of the great ape by Joe and I suspect he may be tiring of the subject matter.

The overall quality is good with minimal clean up required. The mouth parts of Kong and the T-Rex are cast separately so painting is pretty straightforward with a total parts for each figure numbering six or seven 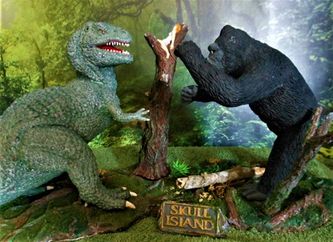 The base is fairly detailed with dozens of roots and a large tree in the foreground with Ann Darrow cast into it, a feature I didn't care for. There are also a pair of dead trees that go with the scene but I'm going to add my own stock for more interest. The over all base comes in four parts, a separate base each for Kong (with a cast in “Skull Island” plaque) and the T-Rex with a transition piece that mates the two along with a free standing “Skull Island” plaque. I connected all three using a few short sections of coat hanger wire which I disguised as tree roots. After filling any gaps with molding paste, I base coated the entire base a dark brown with random blasts of camo green and tan from rattle cans.

I pretty much stuck with the color scheme I have been using for Kong which is a semi-gloss or flat black for his fur and very dark gray for any exposed skin. I used 3mm glass eyes for the face, a source of eye that I have used many times in the past since I can't paint eyes to save my life.

For the T-Rex, I went with a gloss medium gray with several washes of olive drab to bring out the skin detail. I highlighted random scales with a purple brown color typically used in German WW2 camouflage paint schemes. 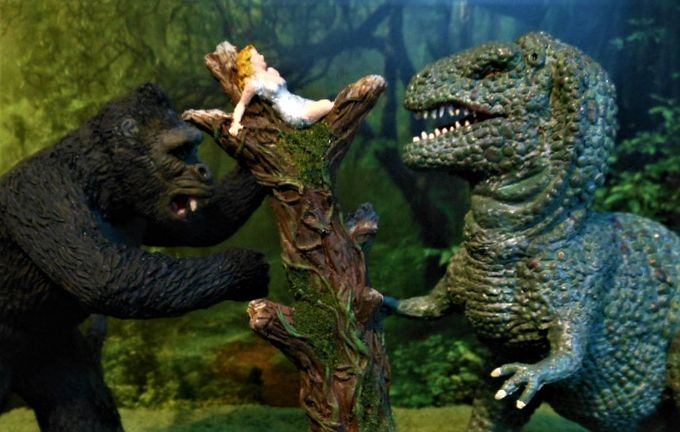 The tree with Ann Darrow perched in it was base coated a medium brown and I highlighted some of the numerous vines entwined with different green coloration. I added some moss and other stuff to add interest.

Ann, who's cast into the tree (why?), is in a skimpy dress that I painted a pearl white to look like satin. I used several flesh tones until I got to one that I was happy with. Her hair started as a dull grayish yellow (some might call it sand) which I finished off with a clear orange, a technique I often use on my blonde subjects.

One thing that is a little different about this kit is that you can display it to match the box art or you can rotate it 1800 add still have a nice scene. I'm prone to the orientation where the tree with Ann is in is in the back ground. Because the two “Skull Island” plaques are on either side of the base, this orientation option is available.

So there you have it. This will be the tenth Kong in my collection and possibly my last although I still have my eyes peeled for Joe Laudati's “Log Roll” (unless I make one myself). 9/28/20 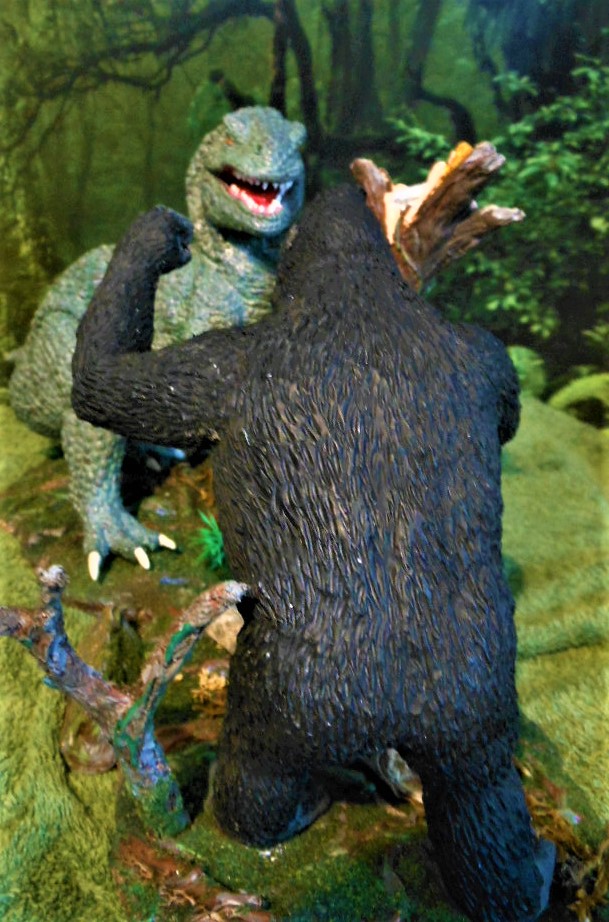 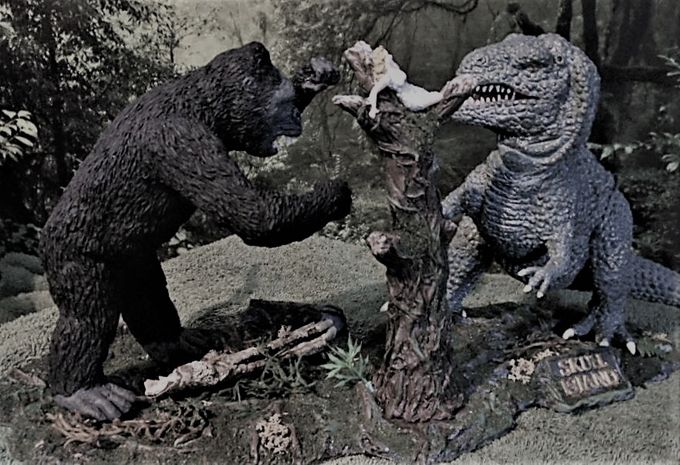 As I have done in the past, I present a black and white version of this kit to match the original film.