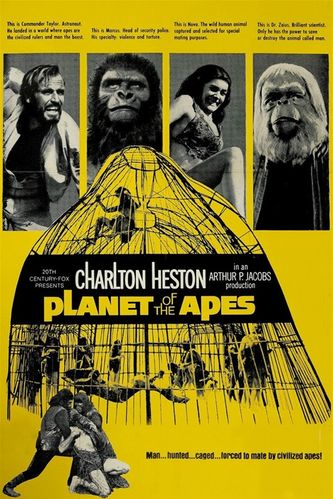 * SOLD! * This recent diorama was inspired by an off hand remark made by a friend of mine regarding the current (2017) political climate. It is the climatic scene in the 1968 film 'Planet Of The Apes' starring Charlton Heston and a host of others buried under piles of primate makeup. I never really thought much of the film and figured out the 'surprise' location of the story about 15 minutes into the film. That's one of the actual movie posters to the right.

The film was really a satire more than science fiction (in my opinion) with Charlton chewing up the scenery. I was surprised by its success and scratched my head in wonder how such a mediocre plot would be the source of four (!!!) more sequels, a TV series and a host of comic books. Since then, the franchise has been rebooted twice, once in 2001 (directed by Tim Burton) and again in 2011 with 'Rise Of The Planet Of The Apes' and its two sequels.

Anyway, I have to admit I always loved that final shot in the original film where Charlton comes across the Statue Of Liberty buried up to her chest in sand, providing the big “reveal” that he's been on a future Earth the whole time and not of another planet light years away as originally thought.

So, with this image in mind, I had to find a nice Liberty statue that large enough for a pretty good size diorama but not so small that finding scale figures would be a problem. After doing a Google search for Liberty statues, I came across one that was roughly HO scale which solved my figure problem nicely for the Heston character, Nova (Chucks' squeeze) and a horse.

I cut the Liberty figure in half and drilled and gouged her in various locations to depict her falling apart as seen in the film. I recast the torch and made a wrecked version which is a little hard to see in the pictures but it came out pretty good I think. I gave her several washes of very dark brown acrylic paint until I was happy with the aged look. Finally, I added very light streaks of gold on the torch to simulate gold leaf along with very faint streaks here and there of flat white for pidgeon droppings.

An interesting (sort of) side note is that when I cut Liberty in half, I found two mini-Empire State building models inside, presumably to add weight the figure. I tried prying them out but they were fused to the interior and impossible to extract (see photo).

Using a screen capture from the film of the scene for size reference and figure placement, I decided on a wooden plaque base measuring 11” x 14”. I used a thin sheet (1/2”) of building foam for the beach area which I carefully sanded to a beveled edge to simulate the seashore. The part of the plaque that was to be under water was painted with an iridescent blue and green acrylic paint to suggest different depths of water with traces of khaki for the shallows. The rock cliffs and debris in the water are plaster castings as are the ruins of Liberty's pedestal which I stained with brown and gray washes.

Once the paint had dried, I came back with several coats of Gallery Glass which is actually used as a faux stained glass medium. It is a fairly thick liquid which will dry clear, regardless of the color you happen to use. I used the Crystal Clear version which gives a nice ripple effect and came back with some Liquitex to make my waves and crashing surf. The trace seaweed lines on the beach were either very thin lines of dark brown paint and/or a dark green ground foam glued in place. * SOLD * 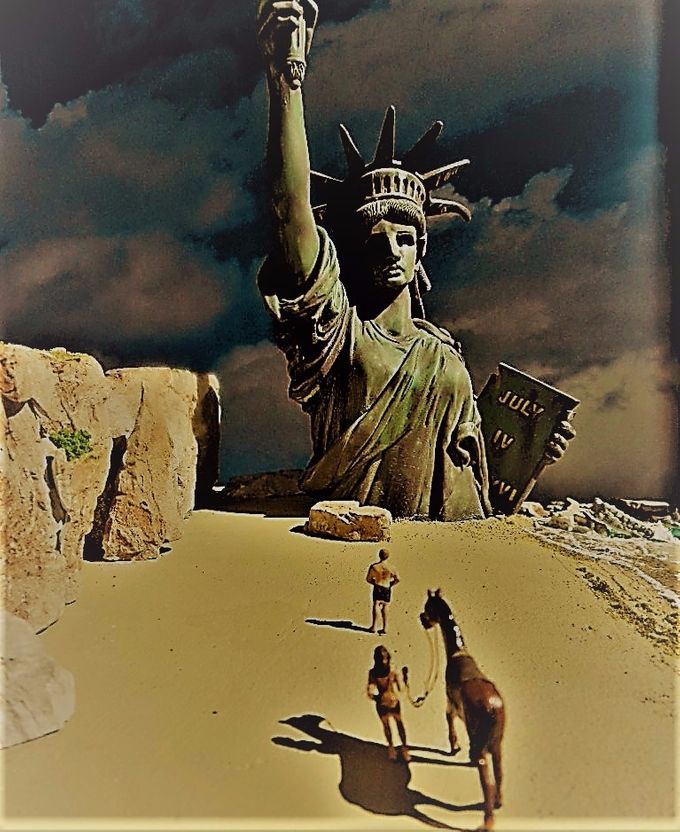 I used some photo filters in Windows 10 that allowed me to get this paperback book (remember those?) cover look. I think it looks kinda neat. 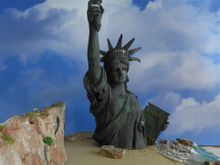 One shot of the finished diorama. Click once for a larger image. 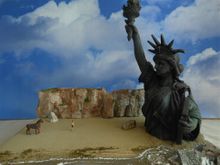 Another shot at a slightly different angle, Click once for a larger image. 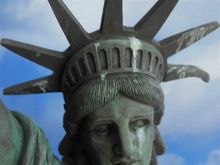 Close up of Liberty's pigeon turd tears. Click once for a larger image. 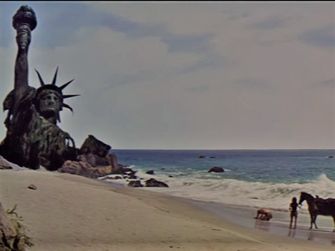 Here's an actual screen capture from the film. It was shot in Cinemascope which explains the length on the image. Click once to get a larger version. 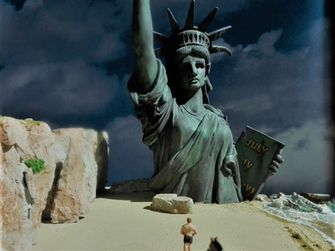 Here is my attempt to copy that same scene. Due to size limitations of the diorama I really couldn't achieve the aspect ratio of the movie but I think the staging is pretty close. Click once to get a larger version.

The photos below are a rough step by step pictorial of the actual diorama build up. Click once on any pictute to get a larger image. 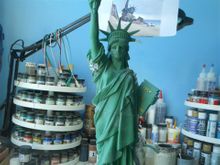 Liberty fresh out of the box 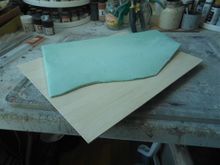 Builders foam on wood base 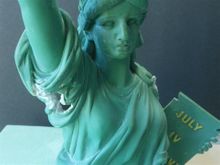 Final statue placement. Liberty's arm pit is gouged out with a motor tool to match damage as seen in the film. I did this in a few other places on the statute to copy the film. Also note the bent spike on her 'crown', again to match the film. 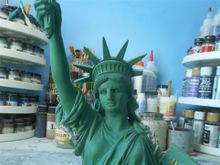 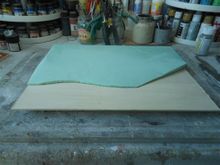 Note foam board 'feathered' to make a raised beach effect 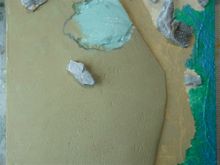 'Ariel' shot of the base. The pale green area at the top is where Liberty will eventually rest. The blue green color on the right side of the base will be the ocean's base color. 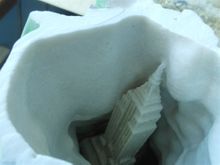 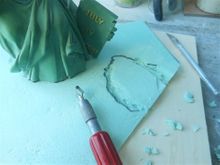 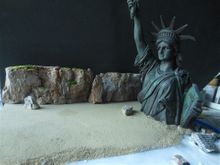 The plaster cast cliffs are stained and installed. The Gallery Glass 'water' will be the finishing step along with placing the three HO scale figures to complete the scene.