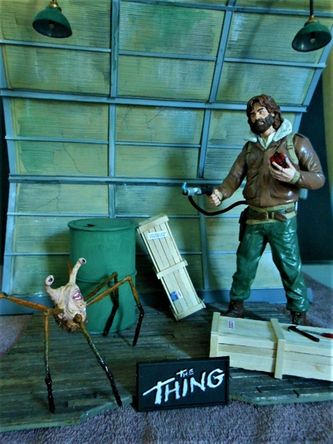 Here's another very nice, bubble free (!!!) resin kit from The Alchemy Works based on the 1982 John Carpenter film, “The Thing”. At the time, the film wasn't all that successful because the oozing, morphing alien was a serious departure from Spielberg's cuddly ET alien which was released into theaters a few months before. However, it is still considered to be a ground breaking pre-CGI film with astounding make up and mechanical effects.

At any rate, the detailed sculpt by Chris Elizardo of the Kurt Russel character, R.J. McReady, is dead on in its likeness to the actor. The 'Thing' spider head fragment is also true to the film however I didn't care for the base that much. I ended up making my own floor out of individual pieces of  'planking' with nail holes added for a little more detail. I also decide to add some wooden crates and tools to the clutter it up a bit more as was the case in the film. I left everything free standing so I could move stuff around if I liked. Just for this photo shoot, I used the background from the "Desparate Measures In A Nazi Lab" diorama which can be seen elsewhere on this site.

Perhaps the most difficult part of the build was the flamethrower apparatus mounted on McReady's back. Thankfully, the manufacturer included a nice blown up photocopy of what it should look like once it was assembled

There are several other 'scenes' you can add to the kit which are from the 2011 prequel which tells the story of what happened at the Norwegian outpost who were the unfortunate original discoverers of the Thing. The kit I built goes for $179.95 (a little steep if you ask me) and the others can be purchased as a group or individually for $99.95 or so depending on its complexity. These kits were also nicely sculpted by Chris Elizardo and are bubble free resin castings. 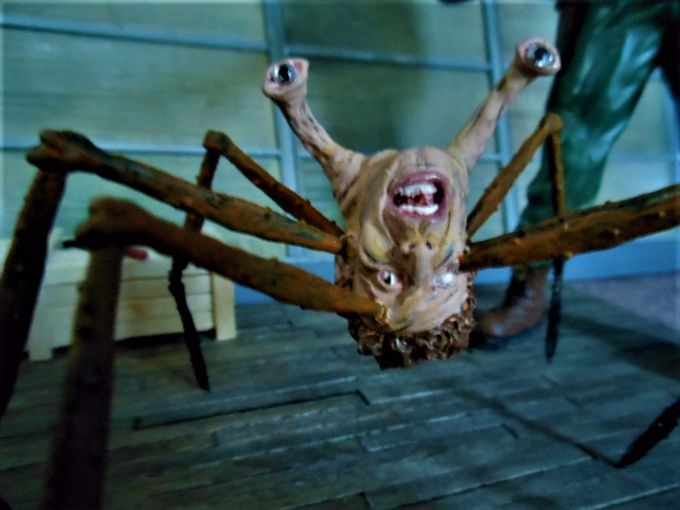 Here's the unaltered spider head. You can see the drill hole in its mouth where I mount my optional tongue. 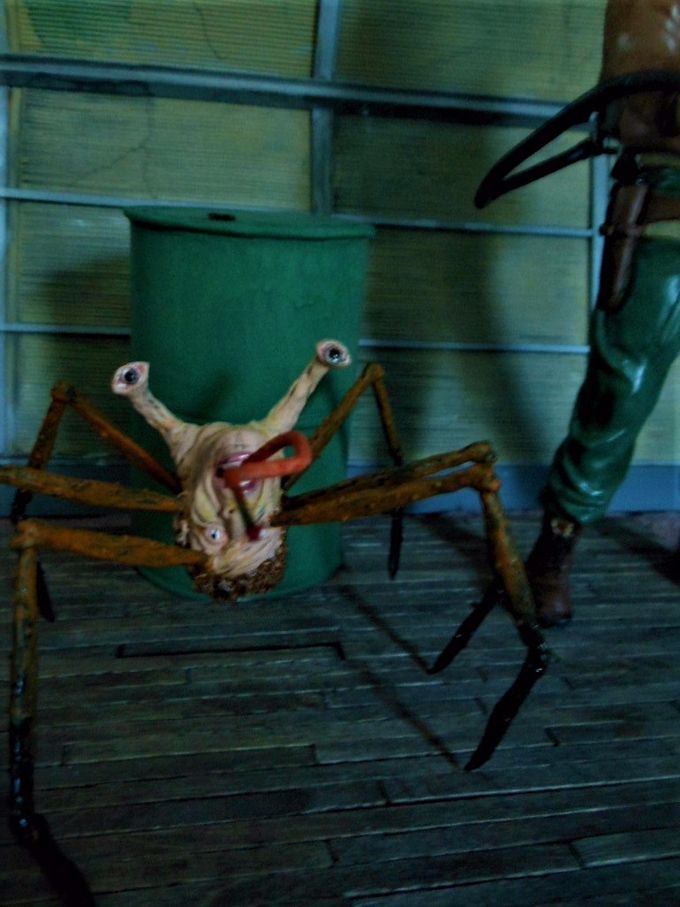 I thought I try adding a tongue to this one, as was the case in the film, just to get an idea how it would look. I'm not sure if I like it that much but it is removable so I can make changes if I like. 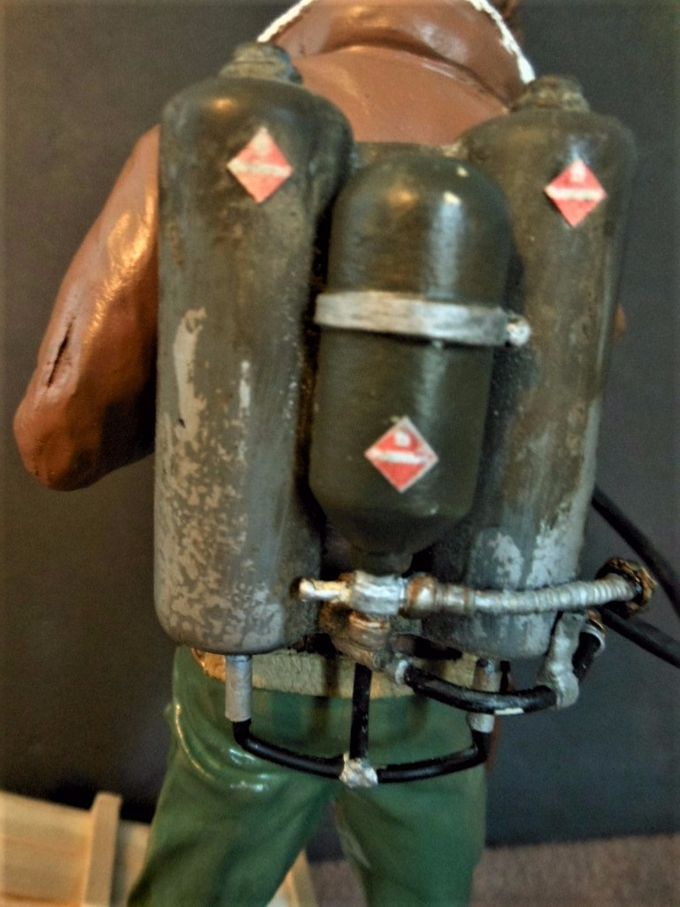 Here is a nice detail shot of a painting technique that I've recently come across that gives a nice worn look to metal surfaces. It is a pretty simple process and I will be adding it to my Hints & Tips section. 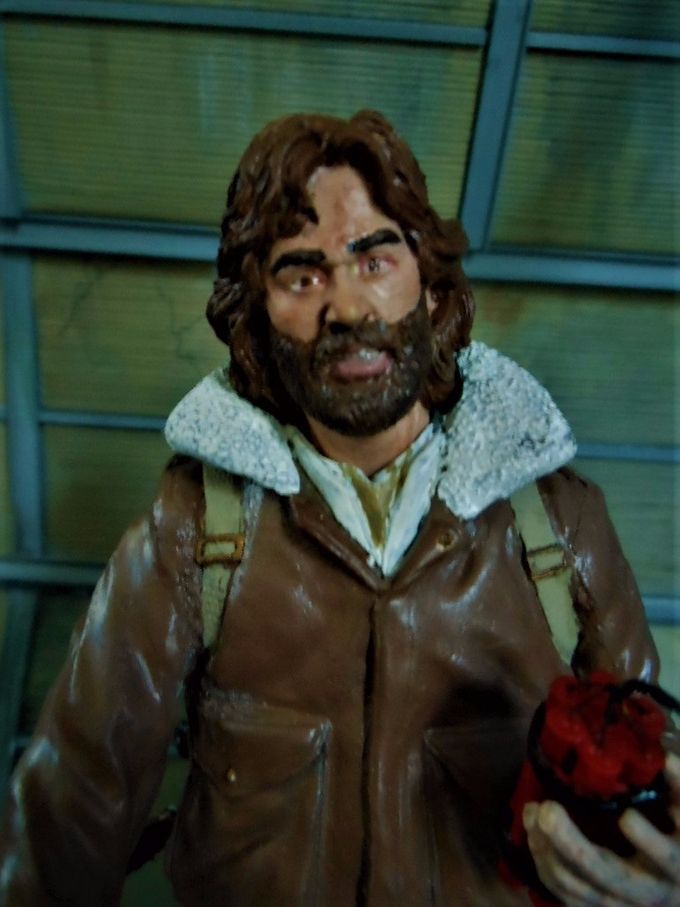 A close up of McReady. Unfortunately, this picture doesn't do just to the fine detail of the face, a great sculpt by Chris Elizardoo. 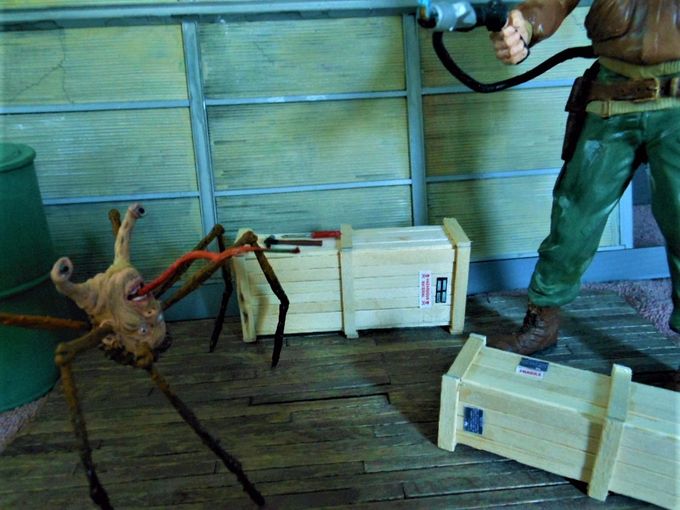 Something of a detail shot, showing the crates, tools & flooring. This diorama won a "Science Fiction Achievement" award at the Rhode Island Baycon Show in 2018. Thanx Baycon!!!