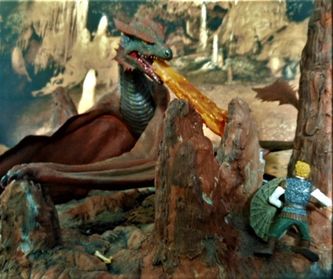 Here is fairly good kit from the good folks at Pegasus Hobbies showing a scene from the Paramount/Walt Disney 1981 film “Dragonslayer”. I won't go into the plot here but I have to say it is probably one of the best (if not THE best) depictions of a fire breathing dragon ever to appear in cinema up to that time.

I say fairly good because Pegasus, I believe, farms out its projects to different manufacturers which can result in an uneven product line. In the case of this kit which, I think, could have looked just as good if cast in standerd styrene, they chose to go with the denser vinyl material as they did with “The Relic” Kothoga figure seen elsewhere on this site. Though the kit has a nice heavy feel to it, some of the seams are pretty obvious and fitting parts together with their 'peg & hole' method needs an occasional assist from a good heat gun or hair dryer. I ended cutting off ALL of the pegs on one wing because I just couldn't get the parts to mesh very well.

The overall detail is very good but the kit does require a bit of clean up here and there. This is be expected but trying to file vinyl and leave a clean surface behind is almost impossible (for this modeler at least).

The base is a very thin vacu-formed plastic simulating the cave in which the monster resides, posed as though he is about to incinerate the young hero, Galen. I wanted to add a little more interest to the scene so I added a half a dozen stalagtites, two of which Galen would be hiding behind since I intended to have a blast of fire emerging from Vermithax's mouth.

There was a narrow, contorted groove that ran front to back on the base which I decided to make into a polluted, oily looking stream of black water. In addition, I scattered a dozen or so mouse bones (yes, MOUSE bones) about the cavern to represent past meals. I went with acrylic earth tone paints watered down and randomly applied about the base, primarily khaki, burnt umber, yello ochre and medium browns and finished it all off with a light wash of black to bring out the rock details.

The Galen figure was pretty straight forward in painting though I Googled the charecter's images to get his coloring right, particularly his clothing.

With Vermithax herself, I went with the box art and made her wing surfaces flat but semi-glossed the 'hard' parts such as the front & back along with the legs, fingers and back spines. The fire breath was made by applying course strips of hot glue over a clear plastic sprue 'armature' to form an elongated cone. Once cool, I sprayed the whole thing with a base coat of flat white followed by a layer of clear yellow then a clear orange 'mist' from a rattle can until I got the look I was aiming for. I didn't wait for each layer to fully dry before applying the next color which gave it a nice blended appearance. The upside of this technique is that if you don't like your first try, hit it another coat of white and try again. I think this flame effect took me three tries as I recall. I drilled out a small hole iton the pointed end of the sprue and inside her mouth so I could insert a stiff mounting wire to hold the effect in place.

This is a nice kit although there is not really that much to it so construction should go fairly quickly aside from the issues I've described. I would have liked to see a couple slain baby dragons somewhere to copy the film but you can't have everything. 11/18/2017 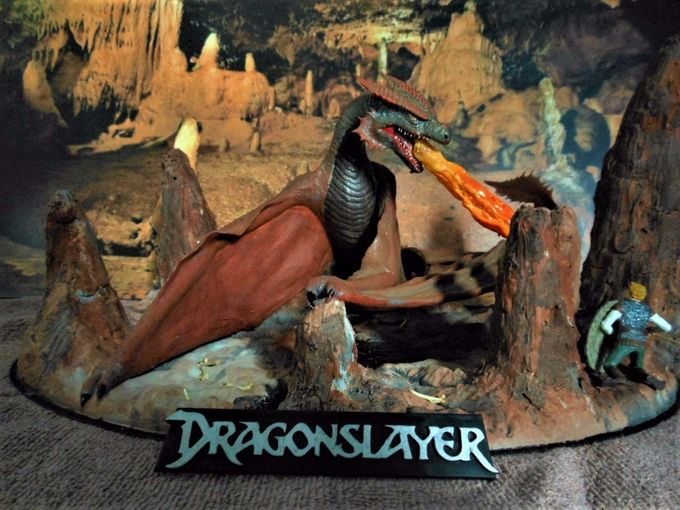 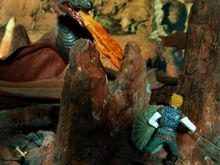 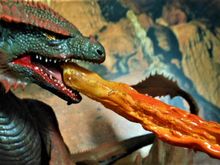 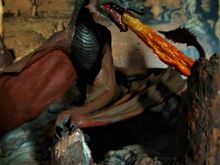