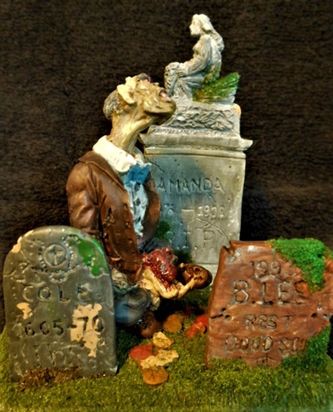 Here is a nice little resin kit I picked up at the 2017 Baycon Model Show in November. I cost me a whopping eighteen bucks and, despite its low price, makes for an interesting mini-diorama. At the risk of reading too much into the scene, I see a creature of some kind, perhaps and elf or goblin due to its pointed ears (or maybe even a Vulcan) pining away in an old graveyard. He has a fairly long neck, the result of a hanging (?) but the most disturbing part of his visage is that he's holding a human heart in his lap. Is he about to re-animate an ancient lost love somewhere beneath his feet? Is he celebrating Valentine's Day? Who knows?

This crude but fairly detailed kit measures about four inches on a side and perhaps as tall. The sculpt is by a John Allard who apparently worked for (or ran) an outfit called Soldat in the 1990's. I did a Google search on each name but came up empty although I did come across another kit from that company on eBay.

Anyway, the kit has six pieces counting the base. There is no real assembly per se since you are just gluing the four gravestones and figure in place. The 'hardest' part is determining your color palette for the paint job so I went with 'standard' cemetery colors. I decide to texture the base with medium green ground foam and also added some moss & lichen here and there on the stones. The base had a number of leaves cast into the base so I went with a Autumn color scheme, painting them randomly in yellow, orange and red.

The little guy himself has medium tan skin tone to give him a mummified appearance and his clothes and wing tip shoes(!) were rendered in a drab color scheme of browns and dark gray. I went with a brick red color for the heart to give it a exposed to the elements kind of look. I then applied a thin black wash over most of the parts to bring out the finer detailing such as cracks and lettering on the gravestones.

I sealed all the pieces (except the base) with a clear latex coat from a rattle can and came back with clear gloss for his mouth and eyes. I clear flat coated his wardrobe for a cloth like appearance.

The kit took me a few hours to paint, most of which was from waiting for the various areas to dry and assembly took all of five minutes. I'll be keeping my eyes open for more of these kits because they gave me a nice little break from the two and three week projects that I usually build. 12/8/2017