One of the Prawn from 'District 9' 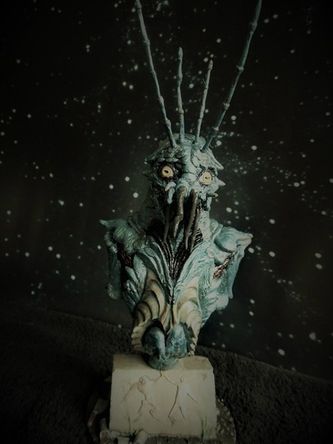 Here is another nice resin kit I purchased from Resin Realities (http://www.resinrealities.net/catalog.htm) recently. It is a bust of one of the Prawn aliens from the 2009 film ”District 9”.

The film is quite good (nominated for four Academy Awards including Best Picture) in its telling the story on an alternate Earth where an alien spaceship has suddenly appeared, hovering over Johannesburg, South Africa in that world's later 1980's. On aboard are the alien Prawn who may or may not be slaves of another race of aliens (not shown) but are having a difficult time of it, suffering from starvation and disease.

Through news reel footage and interviews, we see the subsequent relocation of the Prawn to the surface where they inhabit what becomes essentially an over crowded and filthy slum with the Prawn becoming the victim to all sorts low lifes and clumsy government bureaucracies. The plot is fairly complicated and I am not going to reveal it here but I highly recommend seeing this film. Here is the Wikipedia link about the film you may enjoy reading: https://en.wikipedia.org/wiki/District_9

As I said, this is a very nice kit you can purchase for $100 (includes shipping if in the continental US). The sculpt is by Wayne Hansen who also sculpted “The Beast Of Busco” that you can view elsewhere on this site. The casting is quite clean with very few seam lines to deal with. Unless I an mistaken, it appears that the manufacturer went back and filled up any of the voids and bubbles although there were very few of these. I had to do very minor work rebuilding part of a facial mandible but this was easily corrected.

The kit has fourteen parts, twelve of which are the creature's antenna and other facial features. The remaining two parts are the bust itself along with a nice base to display the creature. When completed, the model stands a tad under 12” tall.

Probably the hardest part of this build was the paint job. The casting is very detailed so it lends itself well to the 'dry' brush technique. The color palette leans towards dark blues and purples to match the film but I went with an iridescent look to give it a more beetle like appearance. Once I was happy with the final result, I gave the bust about four coats of clear gloss to protect the paint job but to primarily make it more insectivorous (is that a word? In appearance.

The base was pretty straightforward but does have fairly good detail. There are a couple cat food cans (the Prawn LOVE cat food) littering the base so I Googled cat food and downloaded a couple pictures of cat food labels which I reduced in size to fit over the 'cans' in the base. I added a few blades of plastic grass from my aquarium stash here and there to make the base a little more interesting.

All in all, the kit assembly takes about 30 minutes not counting the roughly forty-five I spent on cleaning up the seems and the like. Painting was probably about two hours not counting dry times between different color applications. On the Geof Scale of 1 -5, I'd give this kit a solid A. Assemby is a snap and, if you take your time in painting, you'll have a very nice display piece for your collection. 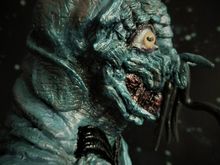 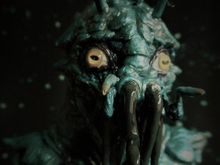 Three different head shots showing the nice detail of this kit. Click on each image once to get a close up view 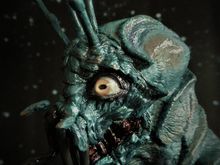 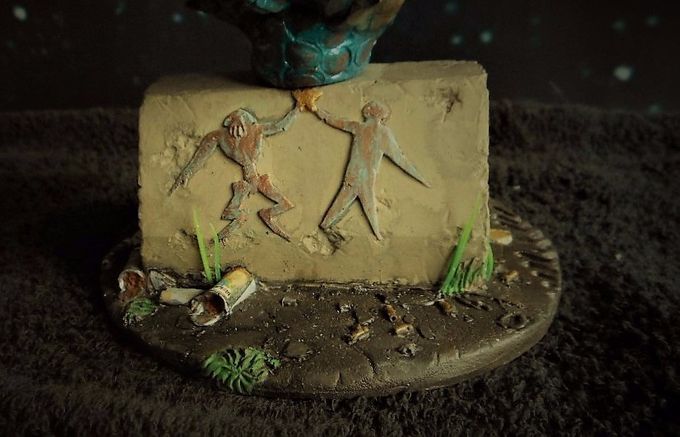 Close up showing the base detail. The Prawn loved cat food and that's a couple cans on the base. I found some cat food labels on the Web and reduced them to 'fit' the cans. Also a few blades of plastic grass here and there to liven up the base a little.