The Centurion from Industria Mechanika 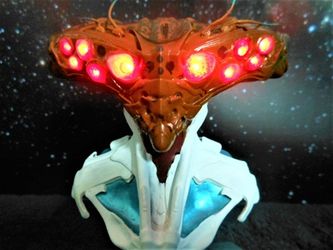 Here is another nice ¼ scale kit from Industria Mechanika called “The Centurion” from a sculpt by Fabio M. Silva. Although it isn't based on any specific character from science fiction (as far as I know), it is a nice representation of an insectiverous type of alein. In some ways it reminds me of the Formics, the alien enemy from the 2013 film “Ender's Game”.

Anyway, the kit is pretty straightword to build although I didn't have any instruction since I bought it second hand on eBay. There are 20 parts, four of which are very delicate antenea mounted on the head and ten are the eye lenses. As in other Mechanika kits, the casting is of a dense, grey resin and is very clean. If I have one complaint about IM kits is that the sprue is rectangular in shape and is sometimes very difficult to determine if I'm dealing with a part of the kit or just the sprue.

As I said, assembly is pretty simple and would have resulted in a nice piece standing about five inches tall but I decided to light eack of the ten eyes with a red LED. Once EVERYTHING had been painted, I carefully drilled out the ten eye sockest as not to damage the surrounding detail. I continued to drill until I had made channels down through the body and stand pieces through which the LED leads would be snaked to the power supply in the base. Note that I provided all my own electronics. There are NO LEDs included with this kit!

After that step, I had the somewhat frustrating task of feeding the LED wires down through the head, chest, stand and base assemblies. I was forced to cobble together a sub-base to hold the LED wires and their power supply, a 3 volt wafer battery. I first ran the ten pairs of wires from the head down into the chest piece which I then glued to the head with two part 5 minute epoxy. Once the epoxy had set, I again fed the wires down through the stand and then epoxied that piece to the bottom of the chest piece.

For the sub-base which will hold the battery, I was lucky enough to have found a plastic cap from a jar of nuts that was exactly the same diameter as the kit's base. I drove a couple metal screws from the undersided of the plastic cap into the kit base along with some epoxy to make the connection more secure. I installed an on/off toggle switch in the rear of the sub-base from which I ran wires to the battery and a pair of bus lines that I would be soldering the LED wires to complete the wiring. Once I ran the LED wires into the sub-base, I epoxied the kit base to the bottom of the stand.

Without any lighting, the kit could be assembled in about an hour with more time from painting. The figure has numerous panels which you can color at your own digression. I chose to keep it simple with the main color being a flat white and an iridescent blue for the shoulder areas. I base coated the satnd & base with an antique bronze from a rattle can and then, before it totally dried, I hit it with a light coat of clear blue, also from a rattle can. By applying the blue on the still wet bronze, you get an interesting swirl of the two colors that would be impossible with a brush.

This is a nice little kit that looks great and doesn't take up too much room on your display shelf. It's too bad it is out of production but, based on my own experience, then do turn up from time to time. 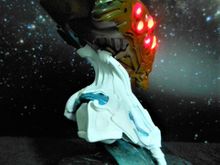 Right side photo of the bust with the LEDS on. Click photo once for a larger image. 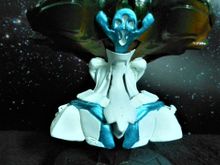 Rear of the bust. Note that the bust has many panels of what might be considered as armor so it lends itself to many possible paint schemes. 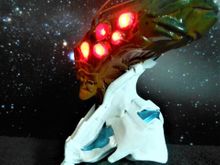 Left side photo of the bust with the LEDS on. Click photo once for a larger image. 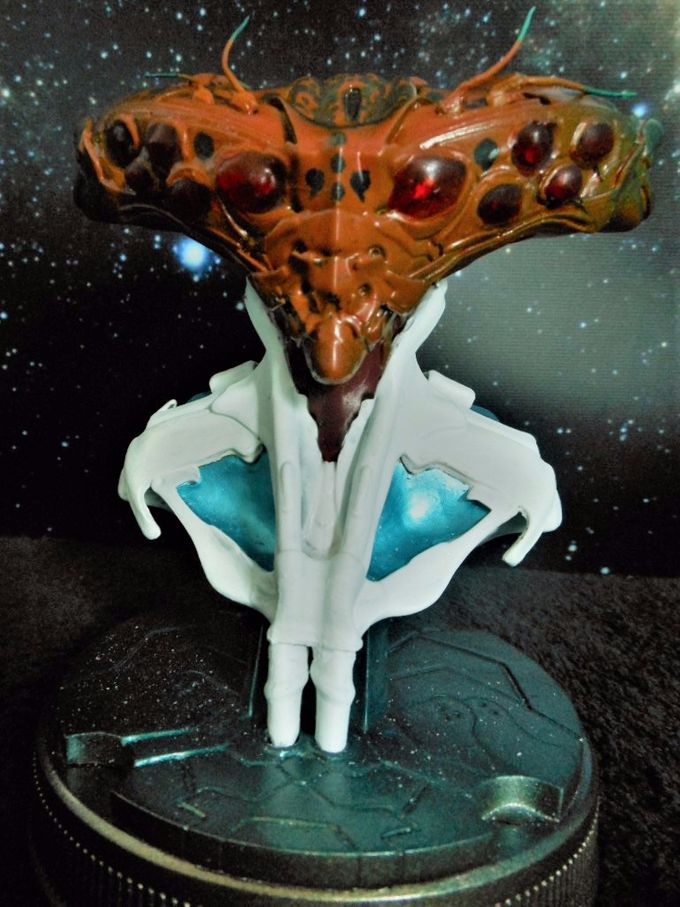 Front shot of the bust with the LEDS turned off. Due to the limitations of my camera, the LEDs "ON" photos are much brighter than actual. Still, t is a nice looking kit with or without lighting. 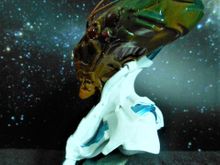 Left side with the turned LEDS off. Click once for a larger image. 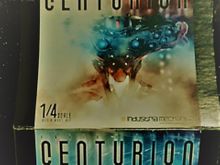 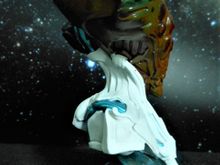 Right side with the LEDS turned off. Click once for a larger image.