Major Toht from "Raiders Of The Lost Ark" 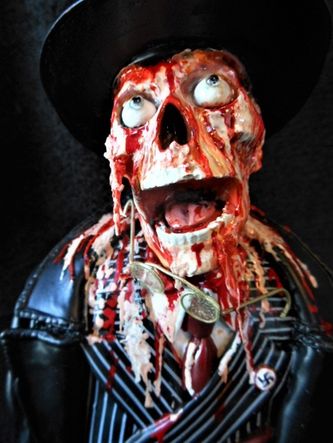 I stumbled across this unusual bust on eBay about a month ago and really liked it's 'look' so I managed to win it in an auction although, as I think back, I may have been the only bidder. It cost me about $50 with $25 for shipping from Spain.

In any case, it is a nice bust standing roughly nine inches high (including the base). It has only six parts, the base, Toht's melting head, the hat brim, glasses and some ooze. I don't know who sculpted it but it was a nice clean cast although the hat brim needed some clean up.

For those of you who don't know or recall who Major Toht was, he was one of the Nazis in hot pursuit of the Ark of the Covenant, the same prize that Indiana Jones was seeking in the 1981 (!!!) classic adventure film “Raiders Of The Lost Ark”. I have read that the screenwriters for this particular scene simply put 'and all Hell breaks loose' as a vague direction for the special effects crew to pull out all the stops and, boy, did they ever! I saw this film on the first day of its release so I was lucky in that I no idea what was about to transpire in this climatic scene and I completely blown away by the surprise and imagery that unfolded. I watched this film again a week or so ago and it still holds up despite repeated viewings of, I dunno, maybe twenty for me?

Anyway, due to its simplicity, the build is pretty straight forward with most of the final appearance relying primarily on the quality (or lack there of) of the paint job. I referenced a few stills from the film (seen here) to give me a jumping off point and I went from there. I decided to pin stripe Toht's suit since it was what he wore throughout the movie. This presented something of a problem since I lack a steady hand until I came across a fingernail detailing (I guess that is a thing) site online which offers vinyl or plastic strips of varying widths and colors. I went with the 1/32” white and hand laid each on Toht's suit which I later sealed with a few layers of flat clear.

The wire rim glasses were very delicate (the kit came with two sets) since they were cast out of resin, not the most sturdy of materials when it comes to fine or delicate details. After breaking both in a futile attempt to make them thinner and not so 'clunky', I ended up soldering up a pair of my own out of 1/64” brass rod stock. The lenses were made from 5 minute epoxy I poured into each frame that was resting on a piece of poly so it wouldn't stick to my work surface. They're a little bubbly but look fine from a normal viewing distance.

The nameplate was layed out on 4” x 6” photo paper using movie titles I downloaded from Google and I got some Germanic fonts for Toth's name which I then merged into one image using a paint program. I gave it a quick shot of UV clear protective coat and secured to the base for display.

This is a nice little kit that is very easy to build and fun to paint. It took me about tens hours for this little guy, primarily due to the pin striping but if you don't go that route expect to spend about four hours or so not counting drying times. Enjoy. 4/23/2018 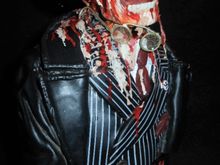 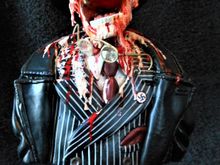 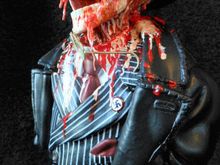 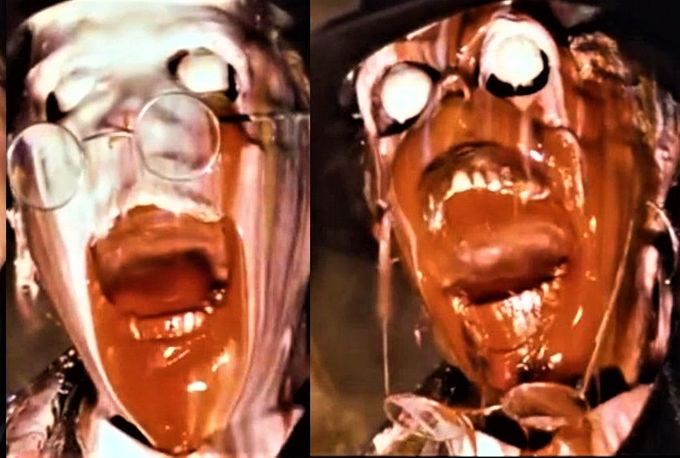 A composite of Toth's melt down as the scene progresses. For this reason, one has some latitude in the amount of melting and color palette for the bust,