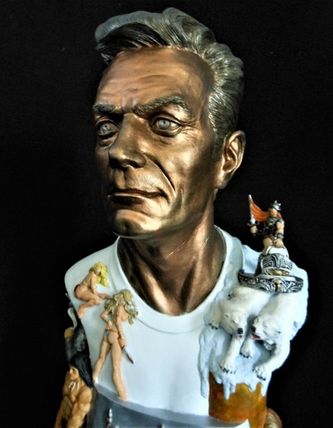 I have been a Frank Frazetta fan ever since I saw his work grace the covers of my favorite horror comics of the mid 1960's, Creepy and Eerie magazines from Warren Publishing. Though he didn't do the artwork for every issue, those that he did had an undeniable aura of the horrific, fantastic and, in some cases, erotic themes for the teen that was me in those days. In a sense, he made Arnold Schwarzenegger's career possible for his paintings from which I will call the “Conan look” which was pretty much copied by the two Conan films in which Arnold starred very early in his career.

Though his easily recognizable style which has been copied by many, there aren't many model kits out there that reflect his prodigious imagination and vision in the world of the fantastic. I can only think of the more common manifestations in the model kit format, that being several versions of his Death Dealer character along with a few of Conan. I have been fortunate to have gotten my hands on a version of his “Swamp Demon” painting in a resin kit form from Resin In Motion which can be seen at this link elsewhere on this site: https://www.oneeffgeof.com/446887418

Anyway, the dearth of Frazetta based kits has been a thorn in my side since I have started in THIS hobby until I saw this terrific bust from Earthbound Studios and lo and behold, my prays were answered. The bust has roughly a dozen scenes based on his work placed about a half scale representation of Mr. Frazetta himself. 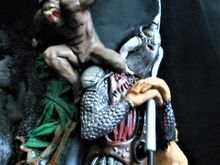 The "Death Dealer", perhaps the most reproduced in kit form of any off Frazetta's creations. Click for a larger image. 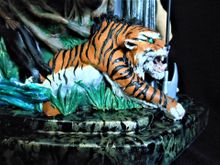 The tiger from his "Escape On Venus" painting. Click for a larger image. 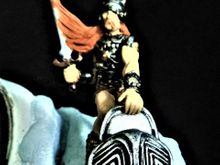 The "Silver Knight", one of Frazetta's more interesting concepts, e.g., polar bears as chariot beasts of burden. Click for a larger image. 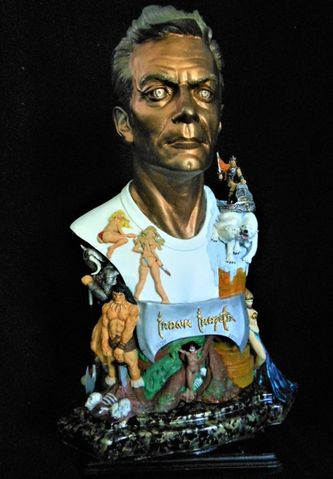 This terrific 19 inch tall sculpt is by Jeff Yagher and weighs about ten pounds! The detail is phenomenal and despite a tiny defect in the cast (one of the girls on Frank's right shoulder had an air bubble on her face), the cast was perfect with nary a seam line to be seen, a feat in itself. There were four pieces that had to be added to complete the bust (an Ann Darrow type figure on a branch, a Death Dealer battle ax and a Viking riding the sleigh being pulled by polar bears) but they fit so well, no adhesives were needed to secure them to the bust.

I decided to go with a basic paint scheme that I had used on another kit (King Kong as it turns out - https://www.oneeffgeof.com/436111746 ) where I used a bronzing technique intermixed with regular paint coloration. I used a material called Rub-N-Buff which provides a very nice metallic finish that enamel or acrylic paint can't seem to duplicate. I went with a two tone effect using a copper hue to the bust's skin and an antique gold for the hair. That was the easy part.

The rest of the bust was a bear to paint, primarily because of the dozen plus mini-scenes scattered about the perimeter of the bust. Each had it's own setting and color scheme so I had to give a lot of thought in avoiding similar colors near one another to allow each scene to stand out on its own. I was fortunate that I had about ten different skin tones in my paint box so each human figure could have a relatively unique appearance. 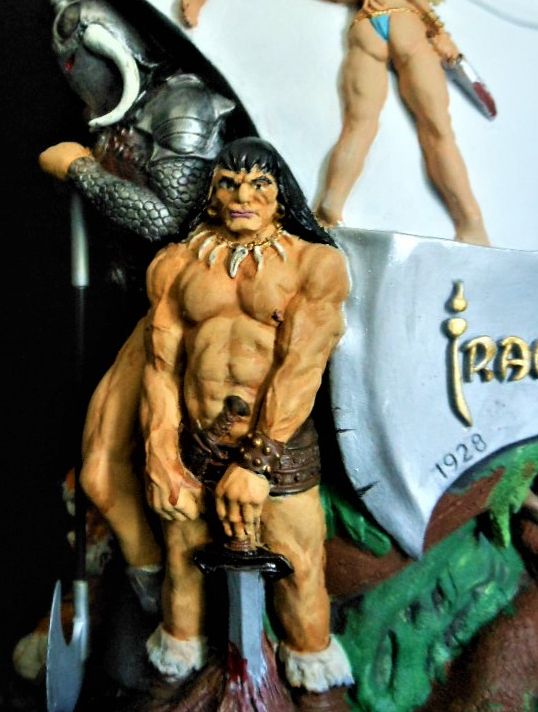 Who else but Conan the Barbarian?

Additionally, I used Frazetta's paintings as a general guide in determining my color palette without being a slave to it. For example, the long haired charioteer being pulled by polar bears was mostly done in grays, silvers and browns in his painting entitled “Silver Warrior”. I decided to go with a bronze based armor and orange red hair depicted in his “Snow Giants” print as an alternate coloration. I also used face painting on a few of the characters to break up the monotony.

Finally, I decided to decorate the based in a black marble veined in gold effect, Also, since the bust, due to its layout, was to to be viewed from several angles, I made a rotating base from a 6” turntable assembly on which it rests.

Though I am very pleased with how this bust came out. I have to give a sigh of relief at the same time. I estimate that there are approximately 50 hours of paint time “invested” in it, easily my most complex rendition to date. I have a similar style of bust waiting in the wings of H.P. Lovecraft but I think I'm going to shelve that bad boy for a month or two before I tackle it. 5/25/21

A brief video showing the bust enhanced with the rousing title soundtrack by Basil Poledouris of the 1982 film "Conan the Barbarian". Special thanks to Robert LaFluer in assisting with this video.