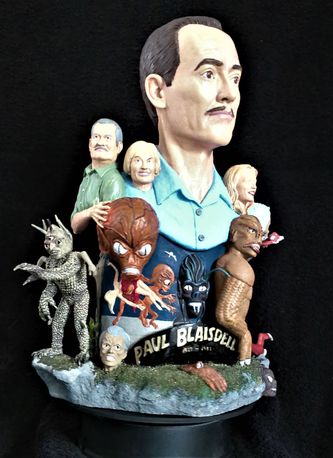 Besides Paul, we have Bob Burns and his wife, Kathy, perched on his right shoulder. Bob worked with Paul on many of his film projects.

Paul Blaisdell was a prolific monster maker and special effects creator during the so-called Golden Age of Science Fiction film (1951-1959) tallying thirteen films to his credit. He also acted in a number of these films with him wearing or operating the monster he had created along with several minor background roles. Although no one can question his creativity & resourcefulness, this viewer found most of his creatures quite ridiculous and unbelievable much like the scripts on which they are based.

This very nice sculpt by Jesse Rubin is from Earthbound Studios' line of tribute busts of famous creative artists and writers such as Ray Harryhausen, Frank Frazetta and H.P. Lovecraft to name a few. The Blaisdell bust is surrounded by just about every one of his creations and props. Some are in relief and a few others are free standing such as the three eyed mutant from “Day The World Ended” (1955).

The quality of the bust cast is excellent and required minimal clean up. The dozen or so pieces cast in resin & pot metal needed a little file action which is to be expected.

After washing the bust and its parts in warm soap and water to remove any residual mold release, I gave everything a coat of gray primer from a rattle can. I let this cure over night and then painted the four human faces (including Paul's) with Tamiya flesh colored paint as a base coat. Using the excellent method developed by others, I applied washes of yellow, red and blue to bring out realistic flesh tones a single coat of flesh colored paint simply can't deliver. 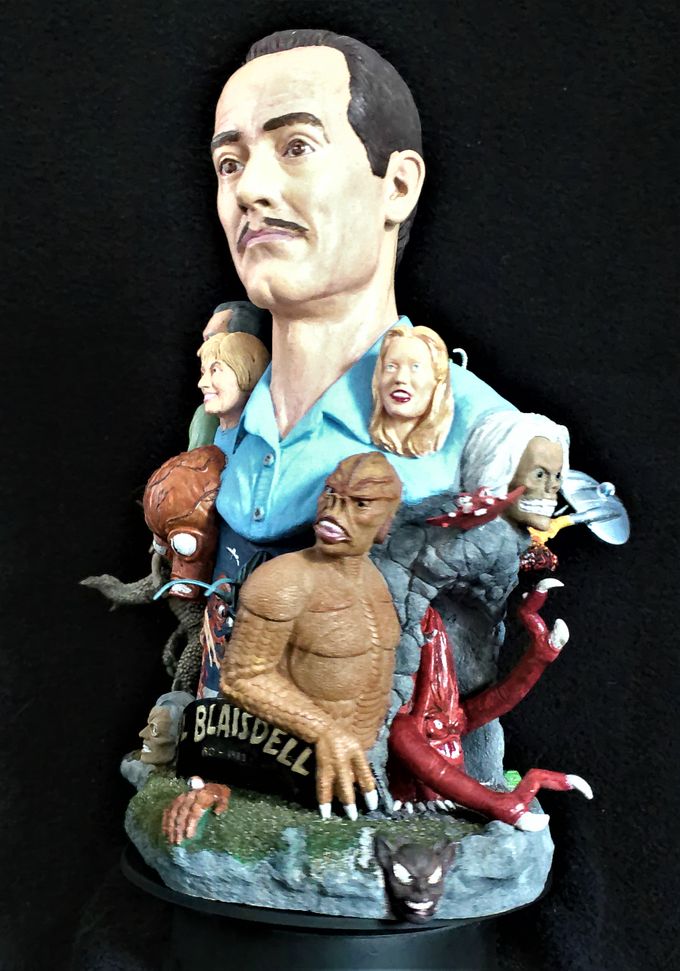 A slightly different angle on this nicely sculpted bust showing Paul's wife, Jackie, who helped him with many of his creative efforts.

The numerous creatures that adorn this sculpt proved to be something of a puzzle to paint since all (I think) were in black and white films. There are a few color photos of these monsters which I used as a guide in their coloration but others were a best guess on my part. Additionally, the proximity of them introduced another issue in that I didn't want one's coloration to be too close to its neighbor(s) so I would have distinct displays of each as it were.

For the background colors. I went with mostly different shades of gray after which I applied a black wash to enhance their textures. On the base, I applied sand and ground foams to represent grass or dirt that I afixed with diluted PVA (Elmer's) glue. I also added some plastic foliage near the Tabanga monster to hide the unconvincing fern leaf cast into the background.

Once I deemed the painting step complete, I attached the dozens of parts such as four arms, a flying saucer, the mind control parasite, a blank magazine, She Creature's head and so on with two part epoxy.

The blank magazine/book cover was detailed with me Googling some Famous Monsters Of Filmland cover images that had Blaisdell's creatures featured on the cover. I downloaded the image(s) into my word processor, resized the image to fit the blank piece of resin and printed it out. This took a couple tries but I finally got the size I needed. I sprayed painted the cover with a UV protection coat followed by half a dozen coats of clear flat paint from a rattle can. 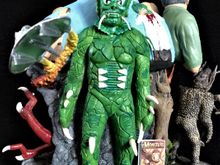 One of Blaisdell's more iconic creatures, the titular She-Creature as improbable as one could possibly hope for as a prehistoric monster the result of hypnotic regression. 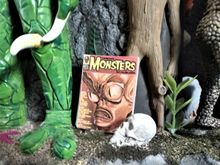 Close up of the Famous Monsters of Filmland with Paul's "Invasion Of The Saucermen" cover.

Probably the best creature in Blaisdell's menagerie from a pretty good film, "It! The Terror From Beyond Space".

Finally, as I had done with my other tribute busts, I mounted the whole business on a small turntable so one could observe the numerous monsters without picking it up thus reducing the chance breakage event.

I did a little digging and I found a collection of science fiction movies themes on the Internet of this period including some that Blaisdell worked on. I made a brief video of the bust with this music playing in the background which actually sound pretty good. The downside is that the limitations of my digital camera resulted in most of it in soft focus but it at least gives the viewer an idea of the layout of the bust and its attendant creatures.

A brief video with actual music from some of Blaisdell's films. Sorry for the soft focus but limitations of my digital camera leave much to be desired.

To wrap this up, I can't say I had that much fun with this build up which soon became a chore for the amount of painting it required. Though it wasn't much different in complexity than the other tribure busts I've done, I wasn't that enthused with the general subject matter.  If I were to do it again, I think I'd just go with a bronzed finish for the whole shebang and knock it off in a couple hours. 5/13/22