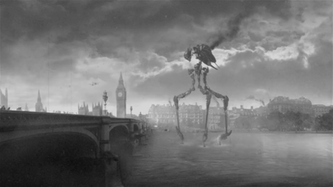 Here is a very nicely done video from the 'found footage' school of story telling. The director, Mike Slee and animators/video FX technitians, Christian Johnson & Steve Maher have cleverly combined archival footage from World War One with Martian war machines based on HG Wells classic sci-fi novel "The War Of The Worlds". I think I like this version better than Speilberg's 2005 version.