Here is a very nice resin kit based on the Id monster from the 1956 science fiction classic “Forbidden Planet”. For those unfamiliar with the film, part of the story involves an invisible creature that has been attacking the crew of the 'rescue' ship from Earth. When finally revealed, the monster looked somewhat like a gigantic bipedal lion in a disappointing (in my view) animated scene. Up until then, the special effects of the film were outstanding so the cartoon monster was big let down for me.

In any case, this sculpt is an interpretation of the creature by Tony McVey who brings a very bizarre look to the creature. Though keeping the bipedal element, Mr. McVey adds a huge grasping hand at the end of its TAIL along with two pairs of spikes or claws protruding from the belly of the beast. The cast was very clean and comprised of only four pieces so assembly went together pretty quickly.

As is my ilk, I decided to the light this build so I constructed a pair of force field towers as seen in the film. I essentially strung a number of LEDs together, one of which was a flasher, so it resembled the structures depicted in the film. I made the towers out of Plastruct angle stock and a few plastic end caps I had in my scrap box. The whole setup is powered by a 12 volt battery which is hidden in the rear of the base.

Because I decided to light this kit, the base would have to be adapted to disguise the associated wiring. The base that came with the kit resembled a small field of flat rocks on which the creature's left leg was cast. I suppose I could have cut the foot free but I liked the look of the stones so I set out to find materials I could use to mimic it. As it turned out, I came across some very thin sandstone shards which filled the bill quite nicely. The roughly one foot square base was a sandwich of Masonite on the bottom (for strength and stability), one inch builder's foam in which I 'buried' the electronics and then topped it off with a layer of sandstone to complete the scene.

The spacemen came from an old Marx play set from the sixties which I picked up on eBay. I painted them like the costumes from the film and though they weren't as detailed as I would have liked, they sufficed in this application although I'll keep my eyes open for better replacements.

Through a little computer magic, I altered a still from the film to generate a background image to match the scene I'm trying to depict. I uploaded this image to Vistaprint who, for about eight bucks, transferred it to a 17” x 36” vinyl banner. I should mention that 95% of all my background scenes you see on this site are produced in this way. 10/1/18 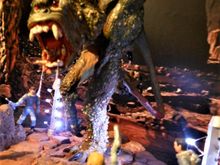 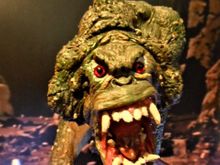 Click on the photos once for a larger version. 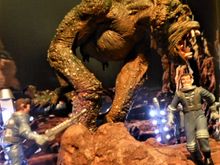 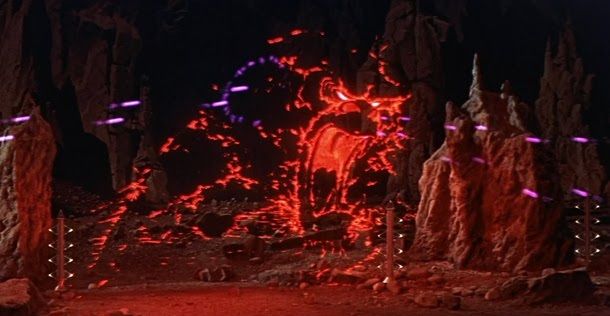 Screen shot of the original Id monster from the film. As a kid. I was VERY disappointed in seeing a 'cartoon' monster. Where is Ray Harryhausen when you need him?