Two King Kongs made with a 3D printer. 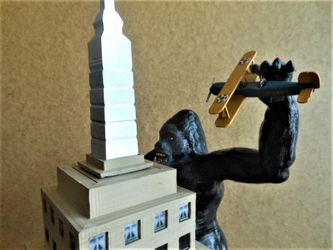 A close up of the larger Kong about to snatch a biplane from the air that flew a little bit too close.

As I have stated in an earlier post (Terminator 2) , I recently acquired a 3D printer which I have been using none stop since I worked out all the bugs. There are a plethora of FREE downloads you can get which will provide recipes to print just about anything you can imagine. Being a huge fan of the original 1933 'King Kong', I thought do a search to see what was out there and, boy, I wasn't disappointed.

Most of the Kong prints I found were busts but one that drew my attention was that of the King climbing the side of the Empire State building. It doesn't really copy the look of the 1933 version of the monster but I still liked the looks of the ape clinging to the side of the skyscraper. The recipe was written by Jason Kessler (aka Misfit410) on Thingaverse (which is where I get most of my subjects to print) comes in two parts, the main structure with Kong on the side as one and the building's spire as the other.

I decided to print out the original Kong without changing its size just so I could get a feel of how it looked. My first print failed (its complicated) but my second attempt came out just right with a whopping height of 6 ¼ inches. The needle like top piece didn't come out that well (too fine for my print settings) so I ended up using a common pin as a substitute..

I went with a lot larger version with my second attempt which resulted in a final hieght of 17 inches. Surprisingly, I have found that by increasing the scale of the print (in my limited experience at least) seems to have NO impact on the detail of the object. You will still see the striation effect I encountered with the Terminator build but it wasn't that objectionable with the this particular figure.

After I painted everything, I decided to install sticker windows on the larger version using a paper model building program that I had (called Model Builder) and just painting the windows a flat black on the smaller version. In addition to the windows, I made a small biplane out of balsa wood & plastic for the larger Kong to snare in his mighty grasp. If time permits, I MIGHT attempt this on the smaller Kong but that is way down on my priority list.

Anyway, I just put this up to give you guys (and gals) and idea of what you can do with a 3D printer. I think you'll be surprised at how much is out there and find that perhaps you may not ever have to buy an 'off the shelf' model kit ever again. (7/1/18) 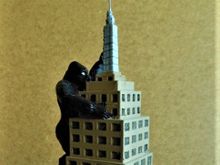 Close up of the small Kong. Click once for a larger image. 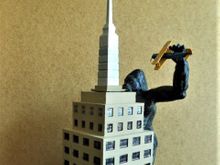 Photo of the big Kong. The only way I can tell these two guys apart is that the larger is holding the biplane. Click once for a larger image. 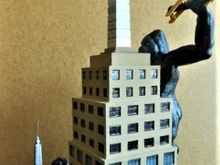 A shot comparing the two Kong models. Click once for a larger image. 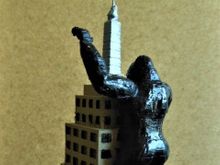 A rear shot of little Kong's rear. Click once for a larger image. 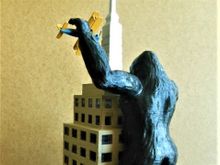 Big Kong's butt shot. Click once for a larger image. 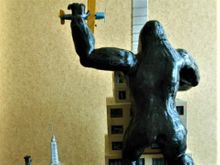 Rear shot of the rears. Click once for a larger image. 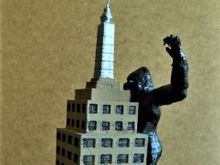 Yet another angle of the little Kong. Click once for a larger image. 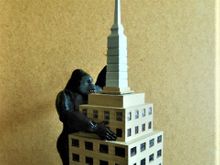 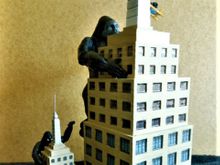 A different angle for comparison. Click once for a larger image. 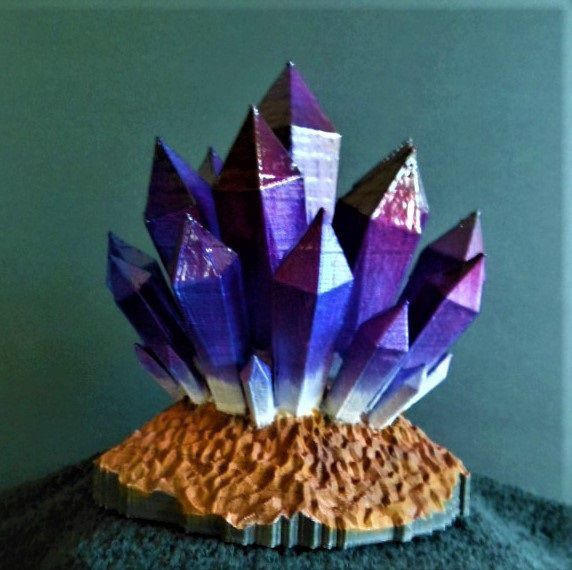 This photo obviously has nothing to do with King Kong but it is a 3D print of some crystals that I finished the other day. It was printed using white material and I did the paint job to resemble amethyst. I include here just to give folks and idea what you can do with one of these printers. This object is about 7 inches tall.

For the Striation you mention, automotive primer/filler and a lot of sanding is really your best option. Though there is a new product called 3D gloop that also does a pretty great job smoothing PLA.

Thanks for the info, Misfit. I'll keep any eye open for it.