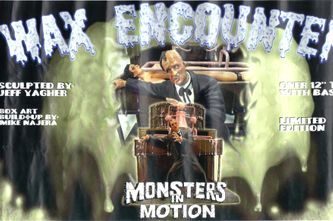 The 'box art' for this kit.

Here is a relatively intricate resin kit called 'Wax Encounter' based on the 1953 mystery horror film “House Of Wax”. The film was one of the first to be shot in color & 3D but neither did much to improve the film in any significant way. The 3D effects really had nothing to do with the plot and seemed to have been plugged into the story to prevent the audience from falling asleep. The only real plus about the film is Vincent Price who, until that time, was watching his career beginning a slow motion decline around that time. But, a man's gotta eat so he did a lot of television which, at that time, was considered by many to be below a 'real' actor's station. Fortunately for all of us, Vincent kept at it, and with his appearances in “The Fly” (1958) followed by the William Caste films, “The Tingler” and “The House On Haunted Hill” (both in 1959) which, in a sense, made him a substitute for the 'classic' horror bogey men, Karloff & Lugosi.

The kit is an OOP Monsters In Motion limited edition sculpted by Jeff Yagher. It is a little complicated for a resin kit (about the same level as Dimensional Designs “The Brain That Wouldn't Die”) so care must be taken in the assembly because the instructions are a little misleading specifically in the build up of what I call 'the infernal machine'.

In the film, most if not all of the piping that delivers the molten wax to the hapless victim is made of glass and, admittedly, looks pretty cool (see photos below). Unfortunately, all this was cast in solid gray resin, which when painted pink or flesh color just looked like a bunch of silly pink pipes which just didn't make it in my view. So, me being me, I decided to go with a more realistic construction of copper lines and cast iron fittings. 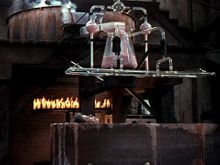 Nice shot of the glassware in the film. Impressive visually but kinda impractical. Click once for a larger image. 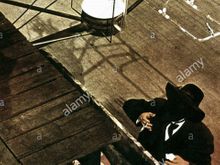 Overhead still from the film with strategically placed hardware to hide Ms. Kirk's (the victim) ah, charms.The kit has no such reluctance to show it all so to speak. Definitely 'R' rated. Click once for a larger image. 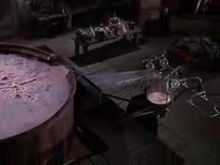 Another overhead shot of the intricate glassware. Click once for a larger image.

Starting with the base, unless I misinterpreted the instructions (which is very possible), I found was about two inches short in its depth in order to fit all the components as the box art would suggest. I ended up attaching a piece of solid oak flooring in the rear to get the extension I thought I needed.

The rear wall assembly could now proceed although since most of the pieces were hollow castings (a move to save on weight & materials, I get it) became a frequent annoyance because when I pinned the pieces for stability the pins didn't have anything to grab onto. I like to make my kits so they can be broken down easily for future transport or shipping so this was a hindrance to that end.

The massive tub holding the molter wax was hollow (which made sense) and I decided to paint it so I looked like it was sheathed it in copper with cast iron framing. I randomly ran drips and runs of wax 'flesh' down the sides and on the platform on which it rested. I highlighted this wax with a gloss clear coat along with highlights of gloss metallic white for the bubbles along with some streaks of wax down the sides.

As I said earlier, I went with a more functional look to the 'infernal machine' by going with a more metallic construction. To add a bit more interest to the device, I scrounged up some pieces of sprue from my scrap plastic drawer that looked like spray nozzles of some kind. I epoxied these on the underside of the tubular rectangle apparatus that is suspended over the victim to give it a more functional look. I painted these copper and flat aluminum with traces of flesh 'wax' to imply that they had been used recently. 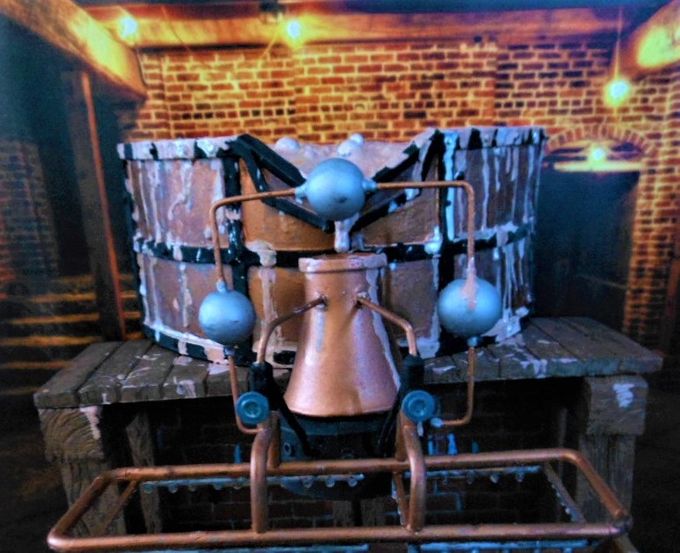 Establishing shot of the 'infernal machine' which I went with a metal look instead of glass as suggested by the box art & film. I got the background off of Google and had a poster made at Vistaprint for around nine bucks plus shipping. Click once for a larger image.

The figures were fairly simple affairs with the one piece anatomically correct woman victim being shackled in a wooden box which stands a frames with wheels. The Professor Jarrod figure (Price) had four pieces: the main body, scarred head & hands. This was a welcome change from other kits that have either the arms or legs (or both) as separate parts adding a level of assembly I can do without.

In any case, the head and hands fit the Jarrod figure very well with next to no clean up. In fact, the kit was very clean in this regard and I had to do very little filing and no bubble filling (!!!) on this kit at all.

Once the kit was completed, I felt the scene could use another touch of the macabre so I made a mask to recreate the smashed mask that Price had worn throughout much of the film. I made a cast from another figure's face with five minute epoxy which I painted it black and flesh color for the skin and hair. You can see it laying on the floor to the left of the victim cart. 12/30/2018 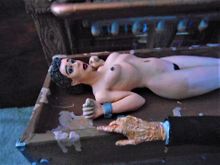 Medium shot of the naked victim, a scene that obviously wasn't in the film but merely implied. Click once for a larger image. 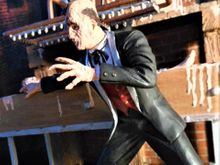 Medium shot the villain Dr. Jarrod. Click once for a larger image. 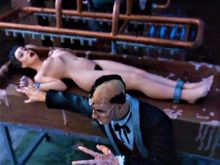 A 'two' shot of victim & villain. Click once for a larger image. 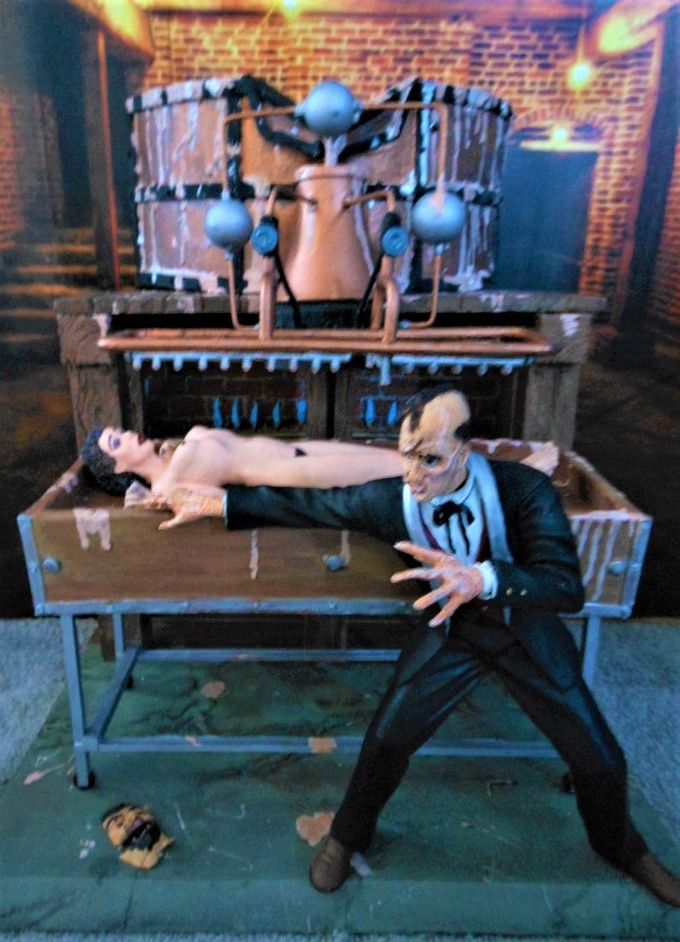 Full shot of the completed kit. Note the 'face' on the floor. Click once for a larger image.