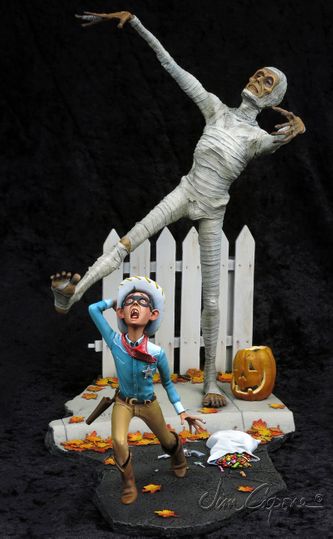 The 'box' art for this kit.

Another of Garage Kits.US amusing Halloween scenes depicting the interactions between classic movies monsters and little tykes out trick or treating in 1960's suburban America. As the title suggests, this particular resin kit deals with the Mummy.

As in previous descriptions of these kits, I'm still blown away by the remarkable detail these kits have. Additionally, the castings are remarkably clean with zero bubbles and the occasional seam line that are easily remedied with a few minutes of filing. No instructions are provided but the part placement is so obvious there's really no need. In this scene, we have the high strutting Mummy practically stepping over a terrified 'cowboy' who's sprinting away leaving his trusty six shooter and pillow sack of candy behind.

After assembling the mummy figure with two part epoxy, I washed it with a mild soap and hot water solution to remove any mold release agents that might effect paint adhesion. Once dry, I gave it a coat of light gray primer from a rattle can. I next applied several washes of different grays and light browns to the linen wrappings, the aim of which was to age the fabric. I next went with a medium tan for the mummy's skin followed by a light wash of burnt umber to further define the skin wrinkles and creases. I used pure white for his eyes with gloss black for the pupils which gave an effect that he was glaring down at the little boy. I finished him off by using black weathering powder on the underside of his right foot to look like he's been walking about for some time.

Assembling and painting the little boy was a bit trickier since some parts overlap slightly so it made sense to paint them ahead of time and gluing them later. I did attach the two arms and one leg right away and washed this assembly with hot water and soap. I did the same for the boy's head/hat and applied the gray primer coat. I decide to make the little kid Afro-American because, well, you don't see many Afro-American characters in scenes like these so I said, “What the heck? Let's do this!” So I did. 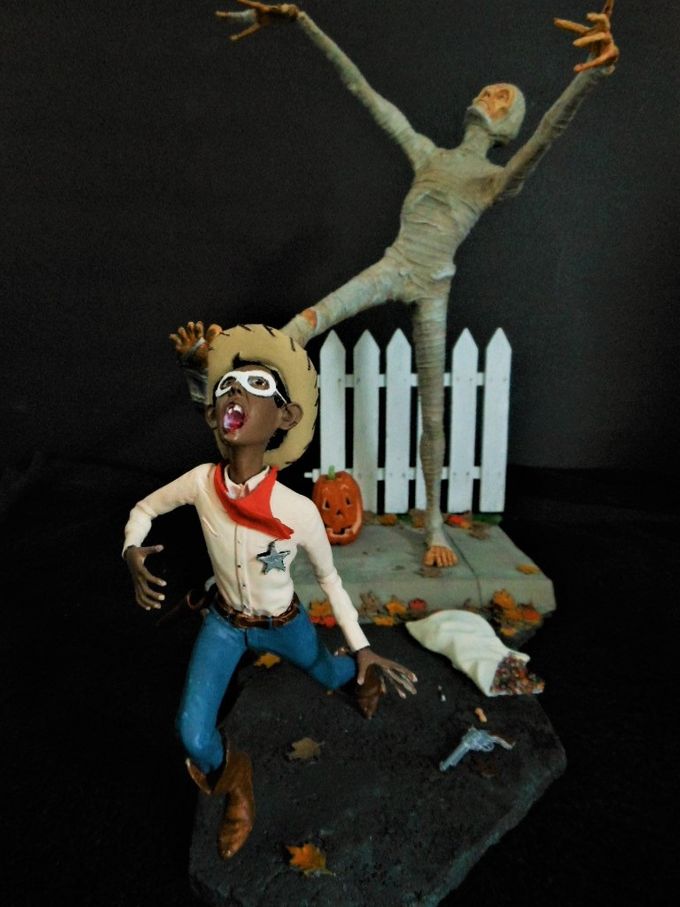 My version with a slightly different color scheme. 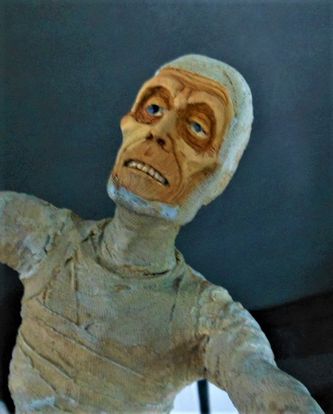 Closeup of the mummy. Note the great detailing in the wrappings and skin.

The boy's head was probably the most difficult to paint because of all the detail. The cowboy hat had a rim wrapped in narrow leather strips so that was a bit time consuming. His gap toothed yelling mouth required a steady hand and the eyes are always a chore for me.

Once the head was to my liking, I tackled the body which was pretty straightforward, the only 'big' decision here was to select the color scheme. I went with blue jeans, a slightly off white for his shirt and tomato red for his bandanna, leather for his boots & belt and brass for the belt buckle. The sheriff's badge HAD to be silver.

The base had been painted much earlier so that it's basic colors would match the other Nightmare scenes (I purchased all seven). The 'extras' (sack of spilled candy, six shooter, picket fence and pumpkin) I had also done off line in order to maintain color consistencies between the scenes.

In conclusion, this was a fun kit to build and didn't require that much skill so I wouldn't hesitate to recommend it to the beginner. 7/13/19 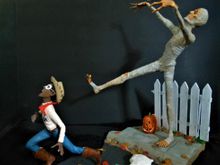 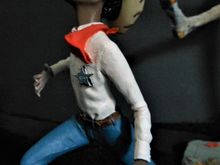