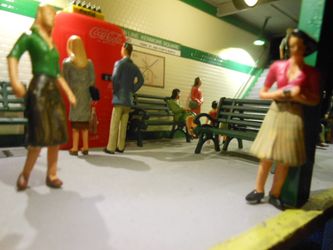 All seems normal but is it? Check out the video at the bottom of the page to see what happens.

I have been a HUGE fan of H.P. Lovecraft ever since I heard a 'ghost' story at camp based on his work in the summer of 1960. This diorama has nothing to do with that specific story but it does evoke (hopefully) the same sense of dread inherent in his work, specifically the short story “Pickman's Model”.

In that story, an infamous yet acclaimed Richard Upton Pickman created paintings of such twisted and alien scenes that caused him to become an outcast from the 1920's Boston artistic community. The narrator, who is one of Pickman's remaining friends, is taken on a tour of the artist's subterranean studio where the horror unfolds. If this sounds at all familiar to you, it may be because it appeared as a segment in 1971's horror anthology “Night Gallery”, probably one of their better HPL adaptations.

Why I am telling you this is that in the course of the story, the narrator gets to view an number of Pickman's completed works, the subject matter of which dealt with the horrible monsters that walk amoung us. One such painting called 'Subway Accident” shows “a flock of vile things” scurrying out of a crack in the floor and attacking the hapless folks waiting on a Boston subway platform. This diorama does NOT shown that particular scene (although it might be something I pull together at a later date) but it does represent a preamble of the carnage about to ensue. 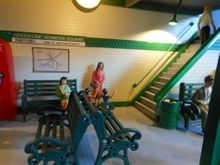 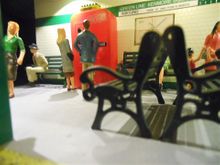 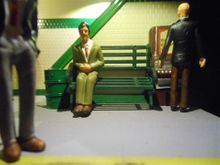 Of all my dioramas, this one perhaps has the most research behind it. Google was a tremendous help with my efforts with its massive image library that I frequently forage. I downloaded dozens of pictures of Boston's subway system since I wanted to focus on as much accuracy as was reasonable. The overall scale of the scene is G scale (roughly 1/32 scale) since I wanted the 'effects' shot to be as visually graphic as was possible. This made acquisition of the scene's main elements (people, Coke & cigarette machines, benches, etc) fairly easy although the people are a bit too small for the platform items in my opinion.

The platform itself is multimedia in its materials. The base is one inch builder's foam framed in wood for added durability. The platform and rear walls are Masonite, with the later sheathed in N Scale Architect's tile sheets (O scale) to match the tile work in the actual stations. The stairway to the right is 'stick' built and also sheathed in O scale tile.

The ceiling lights & clock are eBay purchases as are most of the people which I hand painted. The rails in the foreground are actually a short section of two rail American Flyer track. I filled the spaces between the ties and beneath the platform with a very thick layer of Elmer's glue and then applied a generous layer of N scale ballast. The trash under and around the platform (soda cans, cardboard, paper, stuff) I found rummaging around in my junk stash. 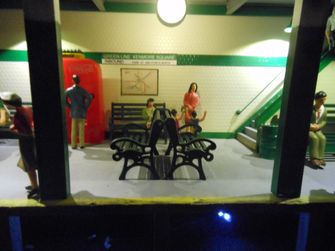 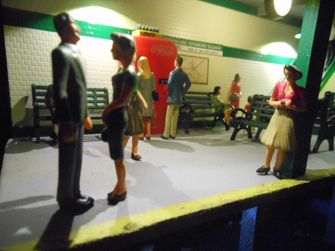 The final piece was to generate a light and sound effects system to present the scene in its 'glory'. This was accomplished with my old and dependable source of the cool special effects, Stan Koziol of Starling Technologies ( https://www.starling-tech.com/ ). Stan and I have collaborated on a number of projects through the years and I have to say that most of the kudos I get for my 'stuff' should be shared with Stan since he made most of my twisted visions possible electronically.

Anyway, I had the image in my mind of a multitude of glowing eyes beneath the platform as the unsuspecting passengers waited above, something like the Morlocks in “The Time Machine” (1960). I also wanted some background subway noise to add more realism to complete the scene.

The 'eye' effect was fairly straightforward with the light source being LEDs with fiber optics pushed through the black foam board beneath the platform. 'Course, I HAD to have them blinking randomly which Stan accomplished with his electronic wizardry with no trouble at all (I don't think).

The subway noise is actually from the Green Line in Boston. I found an eight minute YouTube video on Google (where else?) which I edited down to a minute or so. I sent that off to Stan as an mp3 file and he looped it on to a sound card as part of the total electronics package. Done.

The scene is powered either with a 9 volt battery (for portability) or a stepped down wall transformer/plug since the abundance of electronics burns up a 9 volt pretty quickly. I had a lot of fun creating this scene and I hope you'll all enjoy the video and stills. 12/12/18