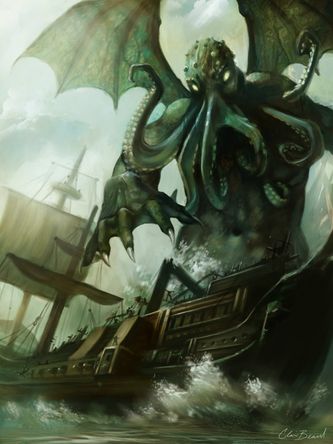 One of many representations of the infamous creature.

Without a doubt, Cthulhu is the most famous of Lovecraft's creations which has had a growing influence on the culture even outside those of entertainment. Cthulhu was first mentioned in the short story “The Call Of Cthulhu” (1928) which is the telling of a series of seemingly unrelated incidents across the country and elsewhere described in dairies, police reports and interviews suggesting that a monster or deity of horrific proportions will manifest itself to usher in an apocalyptic era and the end of mankind.

As described in the story, Cthulhu is a bi-pedal giant with an octopus like head, dragon body, massive claws and scaly wings which “lies dreaming” in the sunken city of R'lyeh who will be called up when the “stars are right” by its insane followers. Why any one would desire such an event, insane or not, has always been a puzzle to me but I digress. 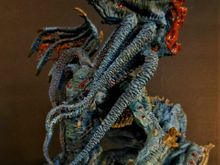 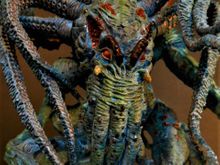 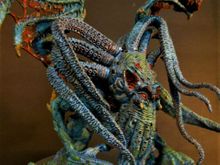 The SOTA Toys flexible plastic figure is roughly 10” tall and 11” wide when all its appendages are fully extended. It comes in a several color schemes, the most coveted being black. The color WILL impact the price of your figure should you purchase one but one can always go back and paint it up as one would like. Some purists out there will balk at this since it will affect the figure's resale price but I am of the mind if you intend to display it for your own pleasure, do with it what you will. It is your stuff after all.

As I suggested, the figure has a lot of articulation. The tentacled head is on a ball and socket joint and the shoulder and wrist joints can swivel 3600 as can the wings, It should be pointed out that movement is somewhat limited since all these features will collide with one another so posing is limited to a certain degree.

Considering the dozens of Cthulhu figures out there, one could do worse than this figure for the price.

There is no sound track with this video.