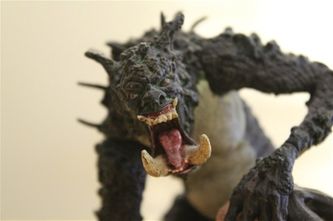 This is one of the toys from the SOTA toy line called “Nightmares Of Lovecraft”. It is based on one of Lovecraft's creatures mentioned in his terrific short story 'Pickman's Model'. The tale essentially tells of an artist (Pickman) whose art is so disturbing and horrific, he has been pretty much banned from the artistic community. The story, as told by a narrator (as most of Lovecraft's stories are), relates his friendship with Pickman and the horror that unfolds as it is revealed were the artist gets his ideas. A romanticized version of this story appeared as a segment in the 1970's horror anthology series Night Gallery (Season 2) starring Bradford Dillman as Pickman and Louise Sorel as the love interest.

As a side note, it should be mentioned that Night Gallery had a number of Lovecraft's stories and 'tributes' aired during that period, namely “Cool Air”, “Professor Peabody's Last Lecture” (a humorous take on Lovecraft but not related to any story specifically) and “Return Of The Sorcerer” which wasn't written by Lovecraft (it was Clark Ashton Smith) but it certainly has Lovecraftian themes. 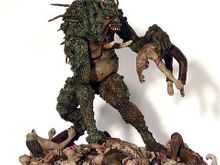 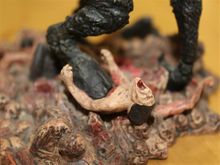 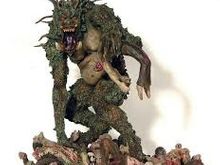 But to the figure. He/it stands 5 ½ inches tall which makes it the smallest SOTA figure in the series. It has a little articulation in that the arm and wrist joints can rotate 3600 which allows a bit of positioning but not that much. The left hand is holding a male corpse which can be removed.

The base is very detailed with a dozen or more corpses in varying degrees of decay, dismemberment and/or consumption suggesting images from Dante's Inferno. Admittedly, this piece isn't for everyone but would surely satisfy any fans of macabre and grotesque in no small measure.

There is no sound track for this video.