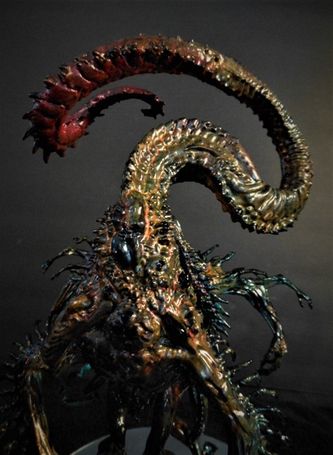 Several weeks after writing about this kit, I found a found a Komoda Nyarlathotep kit on eBay. It sold for a very reasonable $140 which included shipping. When it arrived a several weeks later (it came from China) I was blown away how superbly packaged this kit was. The kit came in a roughly 8” x 6” x 4” Tupperware type of box. Some of the 28 pieces were almost microscope whereas others were so delicate that each appendage was encased in black foam rubber to prevent accidental breakage. They even provided a small box of black foam to hold the really tiny stuff (see photo). I didn't find any bubbles (though I suppose it is hard to say considering the appearance of this monstrosity) or seam lines anywhere.

As mentioned in the AFM review, the figure is VERY delicate and something will break off no matter how careful one is in handling it. During construction I was doing pretty well until it fell off a shelf and broke off over a dozen spines and claws. I managed to find only ten of them but I was fortunate to be able to fabricate the missing pieces (they're in my work area somewhere!) without too much trouble.

I should mention that the instructions were outstanding with a small picture of EACH part and where it went. Additionally, the number order of each piece matched the order in which it should be added (at least I think that was the manufacturer's intent.). I had a little trouble determining what was sprue and what was meant to be an assembly tab but fitting parts helped minimize the confusion for the most part. The problem I found in building this kit was that is is so alien in appearance (hence its appeal to me) that you've no point of reference figuring out what goes where. Thank the Old Ones for the great instructions.

Painting is something of a crap shoot primarily because of it's completely alien aspects so one could do anything one liked and it couldn't be called “wrong”. You can find a nice sequence of photos on Google put out by GECCO (I presume) showing a paint scheme that is primarily using all metallic and iridescent coloration. Click here: https://www.google.com/search?q=gecco+nyarlathotep&rlz=1C1CHBF_enUS845US845&source=lnms&tbm=isch&sa=X&ved=0ahUKEwj71NHB9rTjAhUTG80KHfWtDJsQ_AUIESgB&biw=1536&bih=674&dpr=1.25 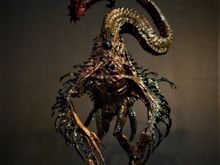 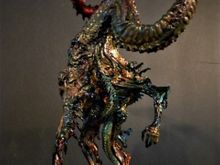 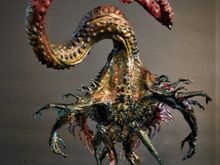 I went through about half a dozen paint schemes before I finally settled on one that I liked which, as it turned out, wasn't too different from the GECCO version.

So I have to say I really liked this kit for its quality, packaging and great instructions and I think it would look great on any HP Lovecraft themed shelf in your collection. 7/16/19 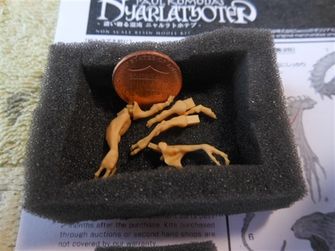 The real small bits packed in their own foam box. That's a penny to provide a size reference point. Click for a larger image. 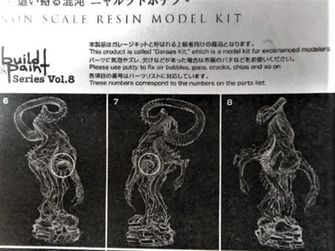 Photo of the terrific assembly instructions for this very bizarre creature. Click for a larger image. 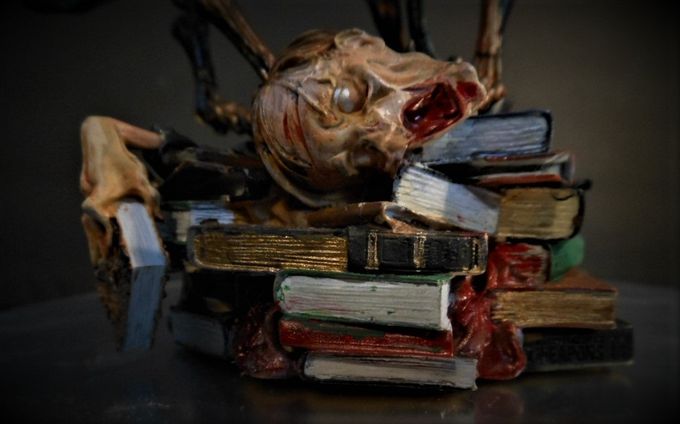 The Base: A pile of books and what is left of the idiot that summoned Nyarlathotep.

Another but vastly simpler version of Nyarlathotep I picked up on eBay. This resin casting came in one piece and stands a bit over six inches tall. The paint job is mine. 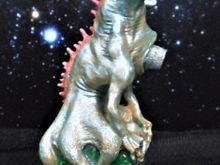 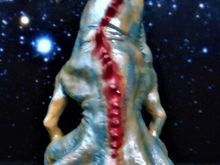 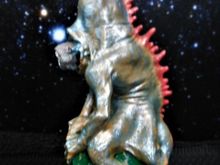